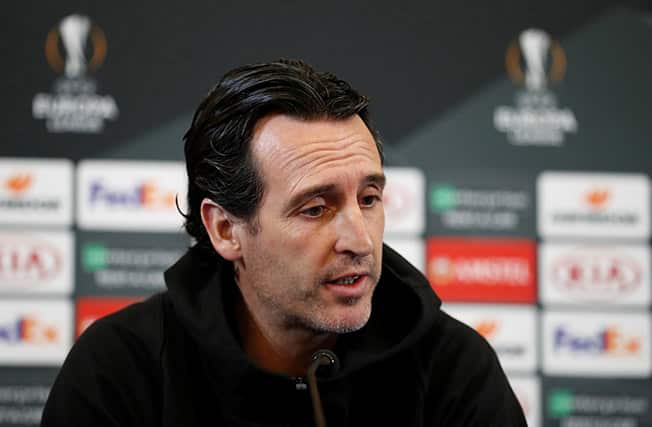 Unai Emery insists his Arsenal side can make no excuses when their Europa League quest gets back under way in a freezing Belarus.

The Gunners face BATE Borisov in the first leg of their round-of-32 clash – with temperatures set to drop below zero as the game kicks off at 20:55 local time.

Arsenal have experienced similar conditions in the Europa League this season, with the mercury reaching minus 10 during their 3-0 win over Vorskla Poltava in Kiev back in November.

Emery – who won three successive Europa League titles with Sevilla – feels that experience will stand his players in good stead heading into the meeting at the Borisov Arena.

“Yes, we are,” he replied when asked if Arsenal were ready for the weather conditions in Borisov.

“We played against Vorskla in Kiev when it was below zero and snowing. It’s not an excuse for us, the weather or the pitch. We play 90 minutes that are the same for them and for us.”

Arsenal, beaten semi-finalists last year, know that winning the tournament would secure a return to Champions League football, with Emery admitting last week his side are “outsiders” in the race for the Premier League top four.

But the Spaniard stopped short of saying he was intending to concentrate all his efforts on targeting Europa League success at such an early stage.

“My thoughts are that every match is a big challenge,” he added.

“In the Premier League, Carabao Cup, FA Cup and now in the Europa League. Our target is clear: to play next year in the Champions League.

“But we know it’s not easy. We have two ways now, one is the Europa League and to win it is very difficult.

“We know it’s a very big challenge, this last 32 against BATE and then we have to win other matches.

“In the Premier League, we also have the possibility to take this position to play in the Champions League next year. The big challenge is thinking only about the next match.

“The next is tomorrow. Improving our things, individually and collectively, creating a big mentality for us.

“We know we need to work hard, we need to improve and be together in this way in two competitions.”

Emery was again asked about the continuing absence of Arsenal’s highest-earner Mesut Ozil.

The forward has found himself on the periphery of the side under Emery and missed the weekend win at Huddersfield through illness.

He was not part of the travelling party to Minsk on Wednesday evening, although Emery explained the decision was not a tactical one.

“The players we didn’t bring in the squad were because Aaron Ramsey did not train with us and Sokratis (Papastathopoulos) only started training yesterday and today – I don’t think it’s enough,” he said.

“Mesut is the same. (Pierre-Emerick) Aubameyang, after he was sick, trained on Monday, yesterday and today, and I think he’s OK for the match.”

Chelsea has to bounce back against Malmo, says Sarri