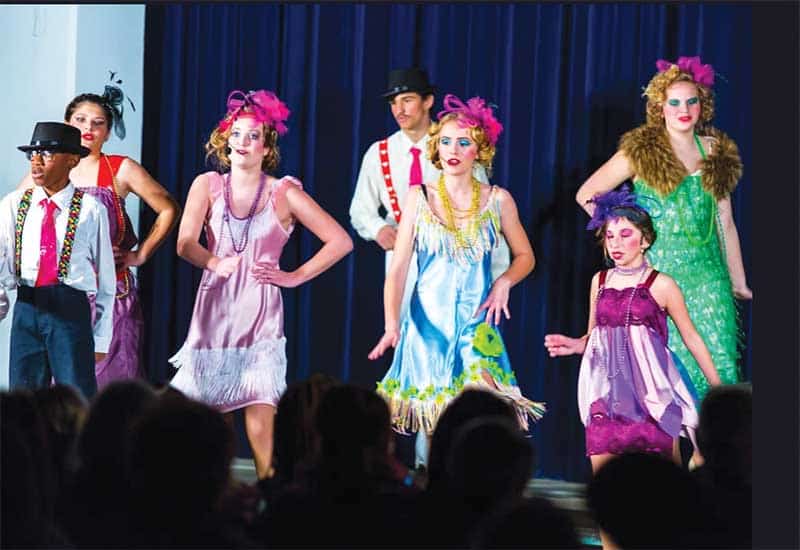 A previous show staged by the theatre group

Paphos Youth Theatre will present Alice @ Wonderland, a musical play which offers a modern take on a Lewis Carroll classic, later this month.

“We are tapping into the traditional and wonderful tale of Alice in Wonderland, but with present-day technology. This adaptation sees the folly of the 21st century collide with the madness of Wonderland,” according to the theatre’s founder and artistic director Michelle Tross Nonyelu.

Alice @ Wonderland will be performed on Saturday February 23 at the International School in Paphos, and tickets are now available.

In a modern twist, Alice is a “texting, tweeting and googling” girl of today, who unexpectedly finds herself in the Wonderland of old. The set and costumes are vivid and colourful, creating a vibrant backdrop for the tale.

The play is perfect for the young cast of 30, who are aged from seven to 18, and for audiences, as it encourages people to put away their mobile phones and learn to interact again with each other, says Tross Nonyelu.

“The musical play brings to the fore one of the problems facing people today, especially young people: it highlights how to be with each other, how to interact and how to communicate,” she said.

The youth theatre’s mission is to enable children of all ages to develop and nurture confidence through performance, to inspire creativity, improve diction, stimulate the imagination and improve English, especially of non-English speakers. It also helps to develop the skills needed in life, such as listening, observing, role-play and awareness.

Nonyelou, who has a background as an actress, teacher and drama therapist, set up the Paphos Youth Theatre 14 years ago when she moved to Cyprus from London with her film producer husband.

“I was amazed that there wasn’t a local youth theatre group for my children to get involved in. I am very aware of the value of drama, so I decided to establish the first English-speaking youth theatre in Paphos.

“Students’ performance skills are enhanced through drama, dance, singing and film work. Students are encouraged to take part in productions and to help with set-painting and other aspects of play production.

“The children acquire various skills through having fun, which is so important.”

Students are accepted from the ages of four to 18, and may also include young adults preparing for drama school and university. The youth theatre follows a structured scheme of work, which is tailored to the various age groups.

At the suggestion of parents and other interested adults, Tross Nonyelu is now also offering a weekly adult group which meets every Wednesday at 6pm for an hour, with the aim of putting on a play for a chosen charity later this year.

“We would love to hear from any adults wishing to join us, so please get in touch,” she says.
Paphos Youth Theatre has staged more than 30 plays over the years, and students are encouraged to take part in productions as well as taking Drama exams including LAMDA (London Academy of Music and Dramatic Art) exams, GCSE, AS and A-Level.

Tottenham players have earned a few days off, says Pochettino