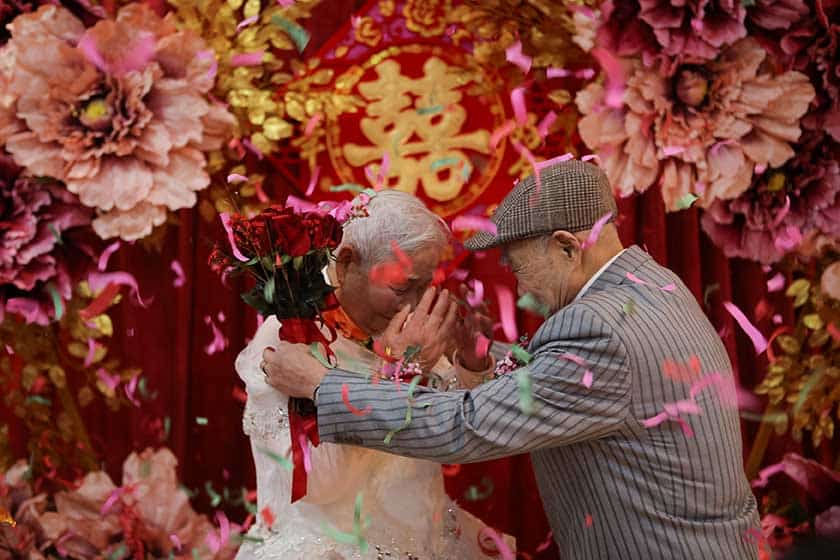 An elderly couple attends a wedding ceremony that is recreated for them by local charities on their 70th wedding anniversary on Valentine's Day in Jiaxing, China

Fed up of red roses, choking on chocolates? Then ditch the Valentine’s Day delirium for a dose of reality at Zagreb’s Museum of Broken Relationships – expanded this year with bonds severed by war and all set to tour in Brexit-riven Britain.

The Museum of Broken Relationships in the old town of the Croatian capital has exerted a strange pull since 2006 on tourists looking for a more offbeat experience.

Its exhibits are donated by ordinary people who want to share what went wrong in their love stories, or those of relatives or friends.

This year, it features the divorce of a Danish woman and her husband, a soldier who could not re-adapt to ordinary life after a tour of duty in Afghanistan – part of a whole new typology of trauma.

“We have eight thematic rooms related in some way to relationships falling apart, like family, sports, love stories in the business environment,” said Drazen Grubisic, one of the museum’s founders. “A completely new topic is love relationships affected by war.”

Particularly poignant is a vinyl record made by a young German in 1942 who dreamt of becoming a singer.

“It was a present for his girlfriend before he was sent to the war – where he was wounded in the throat and could not sing any more,” Grubisic said. They never married, but she kept the record until she died.

Although mostly devoted to lamenting lost love, the museum also makes space for the disappointment of feeling abandoned or betrayed by one’s homeland.

“We have the graduation diploma of a Croat who decided to leave it behind before moving to Ireland in search of a better life,” Grubisic said. “He said it symbolised his break-up with a country that had failed to give him an opportunity to work.”

The theme of lost love is so universal that the museum’s overflow exhibits are often sent abroad, so far notching up 50 cities around the world. While in Turkey, the collection received the wedding gown of a woman whose fiance had been killed in a militant attack in Istanbul.

This March, prompted by Brexit, “another form of broken relationship” that has split Britain down the middle as it seeks to quit the European Union, it is coming to York, in northern England.

Locals have been invited to contribute items in which “the divisions caused by war, religion and politics, will be told through individual stories that say something much more personal about how we all cope with falling out of love”.

Will my Valentine be my spouse? In Cyprus the answer is yes