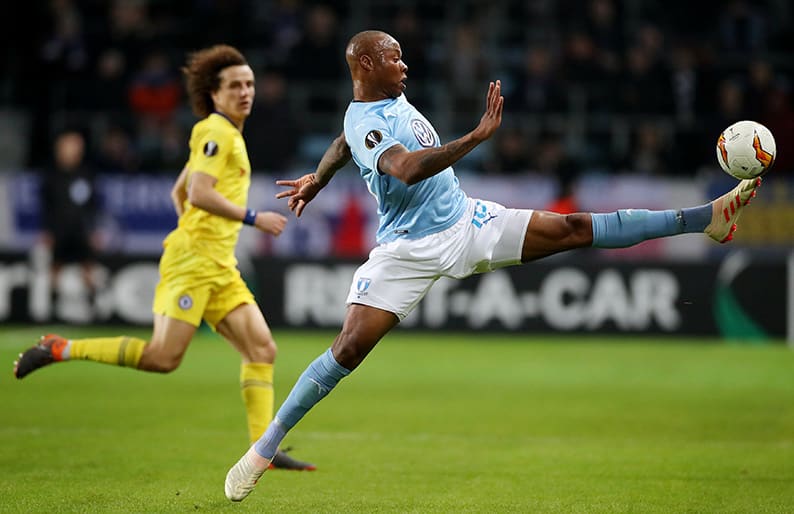 Chelsea responded from their embarrassing mauling at Manchester City with a jittery 2-1 win over Malmo in Thursday night’s Europa League last-32 first leg in Sweden.

The Blues’ 6-0 loss to City was their worst defeat in 28 years and heaped mounting scrutiny on head coach Maurizio Sarri, whose concerns were eased, at least temporarily, by Ross Barkley after 30 minutes.

Olivier Giroud netted his fifth goal in six Europa League appearances with a neat back-heel to make it 2-0, but at present nothing is straightforward at Chelsea.

What should have been a routine return in next week’s second leg resulting in straightforward passage to the last 16 will now be a nervy affair after Anders Christiansen’s strike 10 minutes from time.

Chelsea’s two prior matches against Swedish opposition in Sweden ended in goalless draws, but they did win the 1998 Cup Winners’ Cup final against Stuttgart in Stockholm. The winning goal scored by Gianfranco Zola, now Sarri’s assistant.

The Europa League – which absorbed the Cup Winners’ Cup when it was formed – could offer a route into next season’s Champions League, if Chelsea win. There are many ifs for Chelsea at present.

The next two weeks are critical for the Blues and Sarri. Manchester United’s visit in the FA Cup on Monday is followed by the return with Malmo, the February 24 Carabao Cup final with Manchester City and a Premier League clash with Tottenham.

Malmo play in the same sky blue and white colours as City and the intensity of the Swedes’ start appeared to surprise Chelsea, who looked rattled.

There was a raucous atmosphere for Malmo’s first game since the mid-December victory over Besiktas which secured their place in the knockout stages, due to the domestic winter off-season.

Boos and a raft of pink flares met a Chelsea side showing five changes, with Eden Hazard, N’Golo Kante and Gonzalo Higuain kept in reserve.

Off the field, home and away supporters threw drinks over the Perspex partition which separated them as fan behaviour was again called into question during a Chelseafixture.

Blues supporters were not the sole perpetrators on this occasion – unlike in Budapest in December, where alleged anti-Semitic chanting prompted a UEFA disciplinary investigation which could yet result in a partial closure of Stamford Bridge, as a minimum penalty if found proven. And UEFA is sure to take a dim view of Malmo’s flares, too.

Chelsea’s attempts to stick to Sarri’s possession-based method have caused them plenty of problems and they frequently struggled to string passes together here.

But the Blues took the lead in straightforward style as Malmo’s defence erred when Pedro crossed.

The ball reached Barkley 10 yards out and the midfielder dug the ball out from under his feet and prodded in.

Barkley’s first European goal was also Chelsea’s first away goal of 2019, after four matches without one.

Malmo continued to cause Chelsea problems, particularly from set-pieces, but Kepa Arrizabalaga’s first save saw Soren Rieks denied early in the second half.

Chelsea struck a second against the run of play. Willian darted down the left and crossed for Giroud to flick in at the near post after 58 minutes.

It was the France World Cup-winning striker’s first goal since his strike at Vidi in Budapest in mid-December, albeit just two of his 10 appearances in the intervening period had been starts.

Barkley was denied by Malmo goalkeeper Johan Dahlin and a Pedro effort deflected wide before Hazard was introduced, followed by Kante.

But it was Malmo who scored, as David Luiz and Cesar Azpilicueta were pulled out of position and Markus Rosenberg threaded a fine pass to Christiansen.

The midfielder held off Mateo Kovacic and finished expertly to add to Sarri’s anxieties.

Two Malmo fans encroached on to the pitch at the full-time whistle and one hugged Hazard, releasing his grip only when he was given the Chelsea ace’s shirt. That is another incident which will attract UEFA scrutiny.