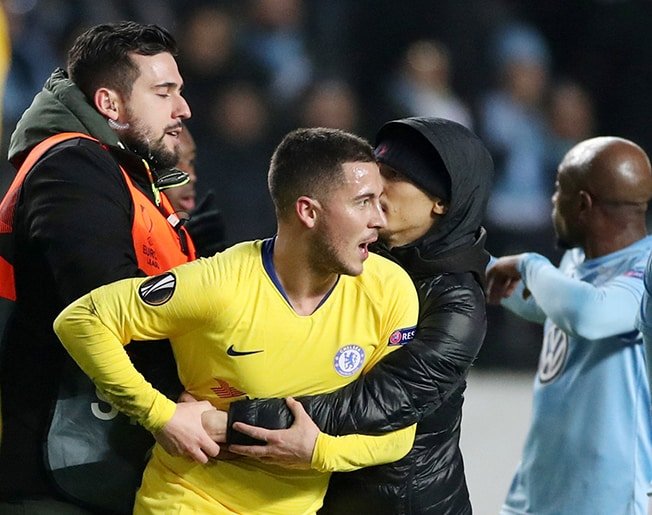 Eden Hazard downplayed the disturbing scene which saw him hugged by a pitch-invading fan at the final whistle of Chelsea’s 2-1 win at Malmo.

The culprit’s grip was released only when the Belgium forward handed over his shirt and UEFA are likely to investigate.

The fan, one of at least four from the home stands who encroached onto the playing surface, was escorted off by stewards, holding the shirt.

Hazard appeared unnerved, but later brushed off the moment.

“It’s not an incident. He just asked for my shirt,” said Hazard, who came on as a second-half substitute in Thursday night’s Europa League last-32 first leg in Sweden.

Chelsea responded from their embarrassing 6-0 mauling at Manchester City, but were less than convincing and received a stark warning from head coach Maurizio Sarri afterwards.

Chelsea appeared to be coasting at 2-0, through goals from Ross Barkley and Olivier Giroud, but Anders Christiansen’s strike 10 minutes from time means the Blues’ progression to the last-16 is no formality.

Sarri’s future remains in doubt ahead of a crucial week: Monday’s FA Cup tie with Manchester United, next Thursday’s second leg with Malmo and the February 24 Carabao Cup final with City. The Wembley date is followed by the Premier League clash with Tottenham.

The 60-year-old Italian said: “If we concede a goal like this to a team like Manchester City or United or Tottenham, then you risk conceding three goals in 10 minutes. So we have to do better, I think.

“We need to have continuity and consistency, I think, in the mental condition to be able to approach every match with the same level of application, determination and attention.

“You know very well that, if you are in bad mental condition in England, in 10 days you can lose three or four very important matches.

“So we need consistency. We have to approach every match in the same way. It’s not easy, but we have to try.”

Sarri was content with the performance, which saw Chelsea’s first away goals in 2019 after losses to Arsenal, Bournemouth and at the Etihad Stadium.

“I am happy because we played with a very good level of confidence,” Sarri added.

“It wasn’t really very easy after the last match. But, today, we were confident because we moved the ball also inside our box.

“We need to think we have to gain qualification in the next match at Stamford Bridge. We have to play because they are really very compact, very solid.”

As well as the small pitch invasion, UEFA is likely to scrutinise Malmo supporters’ use of flares and the throwing of drinks over the partition between home and away fans.

Malmo were playing for the first time since beating Besiktas to reach the knockout stages due to the domestic off-season during the harsh Swedish winter.

Boss Uwe Rosler was pleased with his side’s performance.

“We’ve not shown any respect to Chelsea, especially in the beginning of the game,” Rosler said.

“Chelsea didn’t have a single chance before they scored.

“I’m pleased with the way we approached the game, tactically and mentally. They showed us respect. They brought (N’Golo) Kante and Hazard on. There’s a reason for that.”

The late goal has given Malmo a chance of an upset.

Rosler added: “The odds were against us in the beginning, and are again now. But we rewarded ourselves for the way we played.”

Ministry given a month to demolish disputed venue