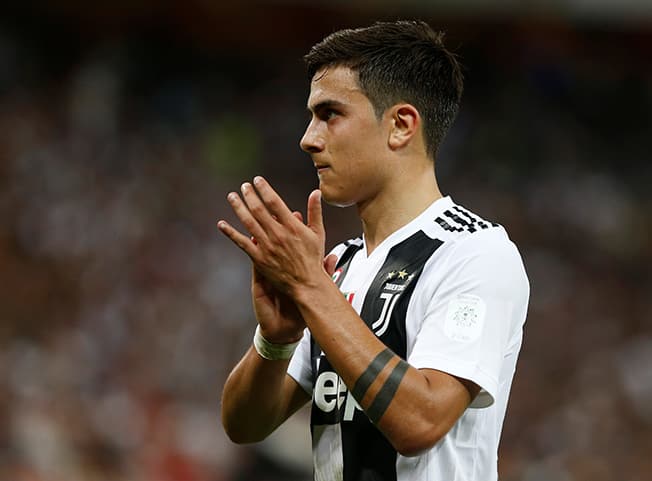 Juventus boss Massimiliano Allegri has described Paulo Dybala as “one of the best players out there” ahead of restoring him to the starting line-up for Friday’s Serie A clash with Frosinone.

Having netted 22 times last season, Dybala has registered just two league goals so far this term, failing to score in his last 10 appearances in all competitions.

He came off the bench late on in the 3-0 win at Sassuolo last time out, having been an unused substitute for the 3-3 draw with Parma the previous weekend.

At his pre-match press conference on Thursday, Allegri confirmed Dybala would start Friday’s match at Allianz Stadium alongside Cristiano Ronaldo, who has scored 18 league goals since his summer switch from Real Madrid.

And he added: “Paulo has impressive numbers in the Juventus shirt: he has played 168 games scoring 74 goals.

“There may be a period where he scores fewer goals but he’s one of the best players out there. This year he has different players at his side to challenge him, but he is crucial for us.”

Fellow defender Giorgio Chiellini, out for the last two, may also feature although midfielder Blaise Matuidi looks set to miss out.

Allegri, quoted on Juventus’ official website, said: “(Wojciech) Szczesny will be between the posts, with Bonucci in defence. Chiellini will be a doubt but if he has the chance he will play.

“(Andrea) Barzagli has been out for a while so he is unlikely to play. (Daniele) Rugani trained separately and had a little discomfort so he will be evaluated. If he does not recover, (Martin) Caceres will play.

“The wide positions will be played between (Leonardo) Spinazzola, (Mattia) De Sciglio and (Joao) Cancelo. In the midfield, I still have to decide however Matuidi will most likely be out.

“Dybala and Ronaldo will be in attack.”

This week Juve announced the news that Arsenal midfielder Aaron Ramsey will join the club in the summer.

Allegri said: “(He) is a great player, however we’ll talk more about him in a few months.”

And amid talk about his own future, the 51-year-old – currently contracted until 2020 – said: “I’ve been fine here at Juventus for five years and I’m happy, but right now I’m focused on the tasks at hand.”

The champions head into Friday’s contest 11 points clear at the top and yet to lose in the league this term, with 20 wins from 23 games.

They face a Frosinone side who have won two of their last three matches, 4-0 at Bologna and then 1-0 at Sampdoria.

Frosinone boss Marco Baroni, whose men are two points adrift of safety, was quoted on the club’s official website as saying: “It’s a complicated game.

“Juve and Allegri are doing something extraordinary. We will have to find in the beauty of this challenge the desire to go to the field and make an extraordinary performance.

“Juventus is a difficult opponent to stem but for us this game must represent a growth.”