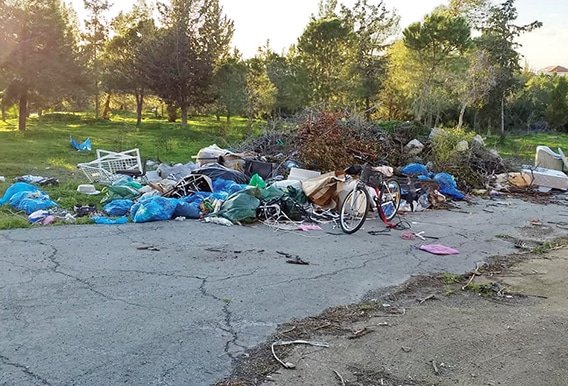 A new Facebook page highlighting illegal dumping and garbage discarded in the area is being started in Peyia.

The public will be encouraged to take photographs of rubbish and upload them to a Facebook page in order to raise awareness of the phenomena, said local councillor, Linda Leblanc, who is supporting the idea.

She is appealing to the public to get in touch in order to volunteer to co-ordinate the page and its content.

“The idea was started by the Greens in Larnaca who are doing something similar and a number of other people have followed suit. It’s a good way to sensitise people as to what is going on in our beautiful Peyia, many will be shocked,” she said.

Leblanc, a Green Party and Peyia Coalition member, has lived in the area for 30 years and said that in that time, the situation with illegal dumping had not improved.

She said that the new page will be an excellent way to bring incidents of dumping to the attention of local authorities, which can then deal with them.

“Generally, there needs to be better waste management, and our green point recycling centre is only for private users and not commercial waste, which in itself causes problems. It’s badly designed,” she said.

Leblanc noted that much could be done to improve the situation, such as utilising a portable chipping machine which could go door to door to chip garden waste and then compost it, as is the case in ‘proper’ recycling.

In addition, the reintroduction of monthly collections of large items from homes would be beneficial, this service was scrapped some time ago, she noted.

It could be paid for by increasing the annual fee for rubbish collection, which is currently one of the lowest in Cyprus at 135 euros, she suggested.

The councillor said that in 2011, Peyia coalition gave a public Power Point presentation along these lines as part of their pre-election campaign and called it, ‘The good, the bad and the ugly.’

“It shocked people and I really hope that there are some volunteers in Peyia to organise a new page. It will highlight the blight and create further pressure to help towards improving cleanliness in Peyia.”

For further information about the new initiative: ‘Pegeia Coalition of Independents’ on Facebook

Our View: Government on the defensive over golden visas