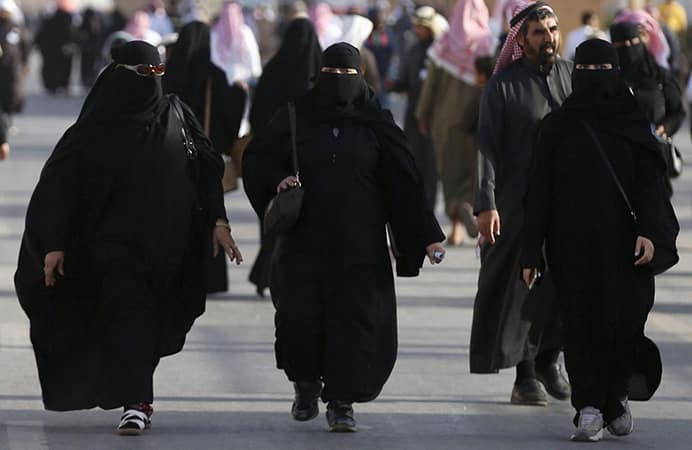 Saudi Arabia is one of the world's most gender-segregated nations

(Thomson Reuters Foundation) – A Saudi Arabian government app that allows men in the country to monitor and control their female relatives’ travel at the click of a button should be removed from Google and Apple’s online stores, a U.S. politician and activists said on Wednesday.

Human rights campaigners argued the tech giants are enabling abuses against women and girls in the ultra-conservative kingdom by hosting the app.

The free Absher app, created by the Saudi interior ministry, allows men to update or withdraw permissions for their wives and female relatives to travel internationally and get SMS updates if their passports are used, said human rights researchers.

The app is available in the Saudi version of the Google and Apple online stores.

“Part of the app’s design is to discriminate against women,” said Rothna Begum, an expert in women’s rights in the Middle East at Human Rights Watch. The European Parliament also urged Saudi Arabia on Thursday to abolish its male guardianship system.

“The complete control that a male guardian has is now facilitated with the use of modern technology and makes the lives of men ultimately easier and restricts women’s lives that much more.”

Begum said a few women had turned the app to their advantage by gaining access to their guardian’s phone and changing the settings to grant themselves freedom, but such cases were rare.

Neither Apple nor Google were immediately available for comment.

Apple CEO Tim Cook told U.S. public radio NPR yesterday that he had not heard of Absher but pledged to “take a look at it”.

Saudi women must have permission from a male relative to work, marry, and travel under the country’s strict guardianship system, which human rights groups have criticised as abusive.

U.S. Senator Ron Wyden has publicly called on both Apple and Google to remove it from their stores, arguing it promotes “abusive practices against women” in a Twitter post.

However, Suad Abu-Dayyeh, a spokesman on the Middle East for women’s rights group Equality Now, raised doubts over whether the companies would take action.

“Power and money talks, unfortunately, without giving any attention to the violations of human rights,” she told the Thomson Reuters Foundation.

“I really hope they take a concrete stand towards removing these apps but I am not really hopeful.”

Saudi Arabia, one of the world’s most gender-segregated nations, is ranked 138 of 144 states in the 2017 Global Gender Gap, a World Economic Forum study on how women fare in economic and political participation, health and education.

Its guardianship system came under fresh scrutiny after Saudi teenager Rahaf Mohammed al-Qunun fled from her family and was granted asylum in Canada in January.

But any moves toward gender equality have been accompanied by a crackdown on dissent, including the arrest and alleged torture of women’s rights activists as well as Muslim clerics.

It has not been a very good week for Saudi Arabia as on Wednesday the European Commission added the largest state in the Middle East to a blacklist of nations seen as posing a threat because of lax controls on terrorism, financing and money laundering.