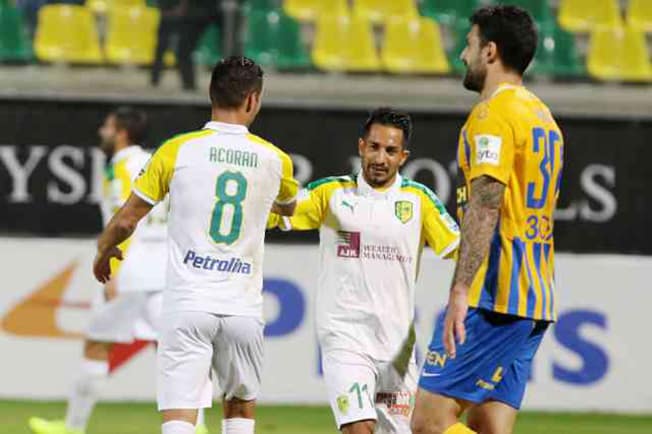 Three games stand out for the penultimate round of the regular season for the final positions in the top group with champions Apoel taking on AEK while Anorthosis entertain Omonia in Larnaca in a game that may decide the final team in the top six group. The third big game is between second placed AEL and the team currently holding the final sixth position Nea Salamina.

There is also a crucial game at the other end of the table where 10th placed Enosis are at home to much improved Pafos FC, with the team from Pafos just a point above their hosts.

Leaders Apoel take on fourth placed AEK at the GSP stadium in a game that can go either way as the visitors have a good record against the Nicosia team having lost just once in their last four meetings in the capital.

Paolo Tramezzani’s team seems to have gone off the boil in recent weeks with key players unable to reproduce the form that helped Apoel go an 8 game winning run. In their past three games they won just onece, losing and drawing in the other two games.

Only the injured Argentinian Tomas de Vincenti is unavailable for Apoel and Tramezzani will need to decide if he will include any of the four new winter signing in his starting eleven and in doing so change his team’s formation.

Since returning to AEK as coach, Imanol Idiakez has managed to galvanize his team and they have regained the form that made them early season favourites for the title.

AEK will be without their regular striker, Frenchman Florian Taulemmese, but Ivan Triscovski who has been asked to step in his place has reveled in his new role firing in six goals in five games.

Idiakez’s biggest concern is the suspension of right wing back, Igor Silva, by far his most consistent player so far this season.

With the Uzoho fiasco ‘expected’ to be resolved on Monday, Anorthosis needs to defeat Omonia at the Antonis Papadopoulos so as to keep alive their chances of a top six finish, even if the CFA judge docks them nine points.

Their captian Victor is suspended while Croatian Daniel Pranjic will face a late fitness test.

Omonia’s season so far has been shambolic with not even their most fervent supporter knowing what to expect from them when they take the field.

Anastasiou has been unable to find any consistency in his team’s performances even though the frequent injuries to key players has not helped at all.

For the game against Anorthosis, Anastasiou said ‘it will be a tough one and my players need to be disciplined and decisive if they we to get something out of this game.’

AEL will want to avenge their first round defeat to Nea Salamina and their task has been made easier as Salamina’s defensive kingpin Roman Golobart is out through injury.

Apollon should have few problems in overcoming Alki and picking up the three points. As things stand now Apollon are 47 points off the top but a favourable decision by the CFA judge on Monday will put them just one point behind Apoel, even if the Nicosia team defeats AEK.