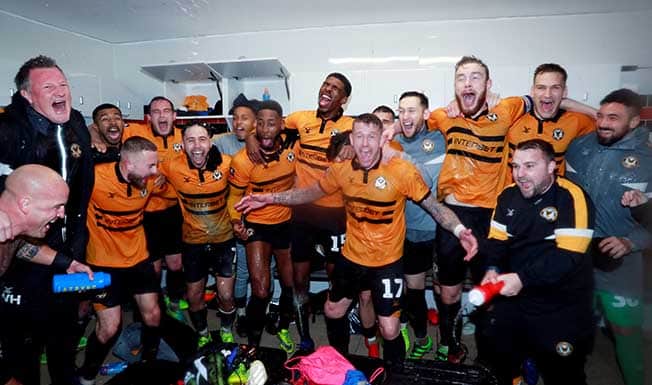 Newport County have an opportunity to cause the biggest upset in FA Cup history by beating Premier League champions Manchester City in the fifth round at Rodney Parade on Saturday, according to manager Michael Flynn.

Fourth-tier Newport have won just twice in League Two since the end of November and have slipped to 15th in the standings, 82 places below top-flight leaders City in the football pyramid.

Despite their underdog status, Flynn hopes the stars are aligned for Newport to add Pep Guardiola’s City to their list of FA Cup scalps this season, which includes Leicester City and Middlesbrough.

“If we win this, whether it’s extra time or penalties and I don’t care how we do it, it will be the biggest shock in FA Cup history,” Flynn told reporters.

“I say that with the biggest respect to other big giant-killings.

“My reasons for that are because of the sheer gulf in finances, the quality of the players Man City have, the level they are playing at, and that they have the best manager in the world right now.”

Manchester City could expect a culture shock when they visit Rodney Parade, a ground which until a few years ago was used exclusively for rugby and with a capacity below 8,000.

The uneven pitch may not be ideal for City’s attractive brand of pass-and-move football but Flynn remains grounded about his side’s chances to be in the draw for the quarter-finals.

“I’m not unrealistic or delusional. I’m hoping they rest a few. I want a few of them to have a bad game and I want every single one of our players to play as well as they can, because that’s the only chance we’ve got,” he added.

“It’s always a little bit easier when you’re at home. I wouldn’t even be contemplating a win if it was at the Etihad.”