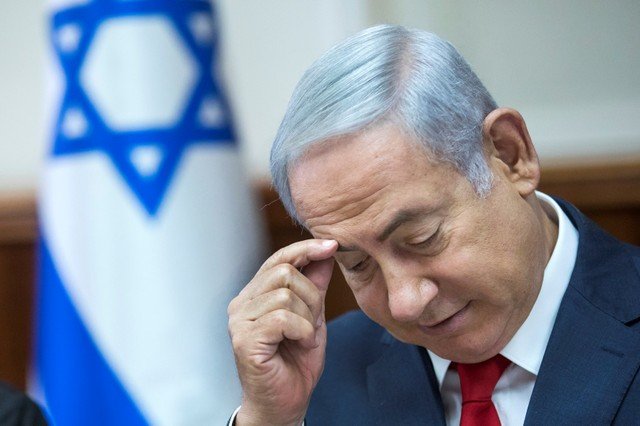 By Jeffrey Heller and Maayan Lubell

Opponents portray him as a criminal. Even before he called an election for April 9, he was branded “CRIME MINISTER” in huge banners at protest rallies, a reference to three corruption investigations threatening his decade of political dominance.

Love him or loathe him, the election is all about Netanyahu.

Although the names of parties will be on ballot papers, the vote will amount to a referendum on Netanyahu in the shadow of his legal woes. If he wins, he will become Israel’s longest-serving prime minister this summer.

“There’s no central issue other than Netanyahu’s reign and clean government – whether he remains prime minister and what the price is for corruption,” said Tamar Hermann, a political science professor with the Israel Democracy Institute.

Opinion polls show Netanyahu’s Likud party is likely to win about 30 seats in the 120-member parliament, enough for the right-wing leader, now 69 and in his fourth term, to form the type of nationalist-religious coalition government he already heads.

He faces a strong challenge from former armed forces chief Benny Gantz. But Gantz’s centrist Resilience party, which is second in opinion polls, would need to pursue groundbreaking political alliances to outstrip a right-wing bloc.

In power since 2009, after a first stint as prime minister from 1996 to 1999, the man ardent supporters hail as “King Bibi” has struck a chord with an electorate that has moved to the right and watched with delight as, under Trump, Washington lined up with many of Netanyahu’s policies.

That has included U.S. withdrawal from the international deal curbing Iran’s nuclear programme, Trump’s recognition of Jerusalem as Israel’s capital, the transfer of the U.S. Embassy from Tel Aviv to Jerusalem and a cut-off of U.S. aid to the Palestinian Authority over its refusal to resume peace talks that collapsed in 2014.

“He (Netanyahu) has brought us excellent achievements, he represents me with dignity. I feel like my country is flourishing because of him,” said Ronit Levy, a 49-year-old insurance agent from the northern city of Afula who goes by the handle of “Ronit the Bibi’ite” on Twitter and Facebook.

The sign on the giant city-centre billboards featuring Netanyahu and Trump says: “Netanyahu. In a different league.”

But in three corruption cases, Netanyahu is suspected of wrongfully accepting gifts from wealthy businessmen and dispensing favours in alleged bids for favourable coverage in an Israeli newspaper and a website.

He has denied wrongdoing, saying he is a victim of a left-wing witchhunt to topple him and that he has no intention of resigning. But his opponents are attacking his record and underlining the need for clean governance.

In a speech that boosted his ratings on Jan. 29, Gantz said Israel’s present leadership encouraged incitement, subversion and hatred, and was so detached from the people that it had adopted “the mannerisms of a French royal house”.

Netanyahu’s legal saga looks set to enter a new chapter soon. Attorney-General Avichai Mandelblit could announce by the end of February whether he intends to file criminal charges, as police have recommended, in the three corruption investigations.

Indictment in court would await the outcome of pre-trial hearings in which Netanyahu would try to dissuade Mandelblit from filing formal charges.

Those hearings would be unlikely to be wrapped up before the election, meaning voters would go to the polls aware that the attorney-general believes there is sufficient evidence to convict Netanyahu of criminal activity.

“The mere notion that in Israel a prime minister can remain in office while under indictment is ridiculous,” Gantz said.

Palestinian leaders have had little to say about the Israeli election, maintaining their traditional policy of watching quietly from the sidelines.

They have already broken off contacts with the Trump administration, accusing it of pro-Israel bias. Any new Netanyahu government would be likely to include veteran allies opposed to the creation of a Palestinian state.

Comments last week by Gantz that Israel must find a way “not to have dominion over other people” — a reference to its continued occupation of the West Bank — won praise from a spokesman for Palestinian President Mahmoud Abbas.

“It’s encouraging, if he succeeds and he sticks to this opinion,” the spokesman, Nabil Abu Rudeineh, said.

Trump intends to present a long-awaited Israeli-Palestinian peace plan only after the election and has been trying to enlist the support of U.S. Arab allies in the region. But expectations of a breakthrough are low.

Another question looms for after the election: will coalition partners still stick with Netanyahu if Mandelblit, after a hearing, moves ahead with indictment?

Knives are already out: former Defence Minister Avigdor Lieberman, an erstwhile political ally of Netanyahu, has predicted that right-wing parties now pledging their support would eventually turn on the Israeli leader.

Hermann, of the Israel Democracy Institute, said Netanyahu enjoys loyalty from his core supporters of lower-income Israelis who see him as their champion.

Netanyahu’s backers, many of them Jews with roots in the Middle East and North Africa, hold grudges against left-wing parties that once dominated Israeli politics, accusing them of maltreating immigrants from those regions.

“It doesn’t matter what he does, they don’t expect him to conduct himself by the same moral standards that bind ordinary people,” Hermann said. “You don’t regard the king the same way you do a peasant.” (Editing by Timothy Heritage)