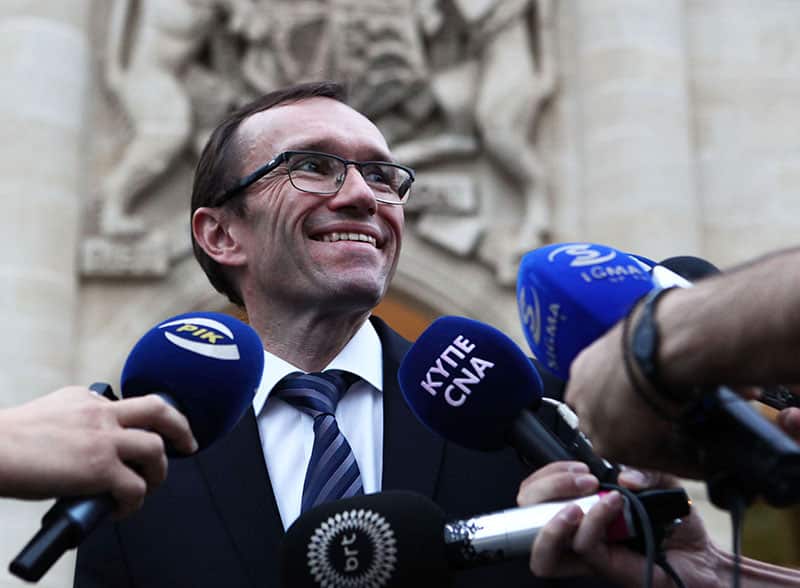 What exactly did Eide leak? And to who?

PREZ NIK can always be relied on to introduce some new excitement and suspense to the Cyprob as soon as he senses that his ‘I am desperate for the resumption of the talks’ act has lost the last bits of interest of his bored and disbelieving audience.
A new drama has to be invented and this week it was the loss of the minutes of a discussion about the Guterres framework held at Crans-Montana on the July 4 with the Norwegian liar Espen Barth Eide. Our Nik was devastated when he realised a few days ago that the minutes of this critical meeting, at which some thoughts about the framework were voiced by Eide and our side added its own demands and was the final, official version, were nowhere to be found.
There was no document of the minutes despite the fact that the UN kept minutes for every single meeting, pointed out a clearly distraught Nik, who now feared the danger the Guterres framework would not be included in the terms of reference that the UNSG’s envoy Jane Holl Lute was preparing. Without the framework, there would be no discussion of the abolition of guarantees and the withdrawal of all the Turkish troops.
‘Bomb on the Guterres framework’ declared Phil’s banner headline on Thursday, reporting that the “consequences of not finding the minutes are considered very grave, because without these the Guterres framework cannot be part of the terms of reference.”
Prez Nik, according to the same report, had asked Lute at their last meeting to try to establish the whereabouts of the minutes and get back to him. It was not clear if she would organise a search party or hire a detective to look for the document.

THE QUESTION nobody asked the prez, is whether the lost minutes ever existed or whether they were a figment of his imagination. Had there been minutes of the July 4 meeting why had Nik not cited them in the public row he had with Akinci over which framework was the valid one – the one announced by the UNSG on June 30 or the one informally discussed with Eide on July 4?
Asked on a radio show some time ago whether there were minutes for the July 4 meeting, negotiator Andreas Mavroyiannis said he had taken notes, thus acknowledging the UN had not done so. In fact, Eide has said when asked by a journalist that the July 4 version of the framework, which Nik has been banging on about was the Greek Cypriot side’s minutes of the introduction he made about the framework, during which he reflected on some of its aspects.
It was not meant to be a new alternative version of the framework, said Eide. The Guterres framework was what was said by the UNSG on June 30, was the very clear message, something only our prez does not seem to understand and has been insisting there was a July 4 version.
It is entirely possible there were never any minutes of the meeting, apart from those taken by Mavroyiannis, and that poor old Lute has been sent on a search by our prez of something that he knows does not exist.
It is good practice for her as she is already engaged in another wild goose chase – the resumption of talks.

SPEAKING to hacks at 20th anniversary party of Politis on Tuesday night, Nik claimed that on July 4 Eide dictated to the two sides what he had been told by Guterres in a telephone conversation about the framework and both sides took minutes.
He also hinted that there was some conspiracy. While minutes existed for “all days of negotiations, morning afternoon and evening the only minutes missing were those for the meeting of the morning of July 4. Asked if someone had made these ‘vanish’, Nik avoided answering, preferring to say that he hoped Lute would find them.
There could only be one suspect – Eide. Some newspaper reports implied that behind the mystery of the disappearance of the non-existent minutes that so upset our prez was the lying Norwegian. This theory was helpful to Nik as he was involved in a public row over the existence of the minutes with Akel which openly accused him of lying, the commies not subscribing to the doctrine that our prez never lies.

THE HOLIER than thou Green leader was so angered by this pointless exchange he got his party to issue a scathing statement which said: “They are spending their time in a debate over whether the then UN envoy, Mr Eide engaged in machinations or not, when the tactics of primarily serving the position of Turkey of the Norwegian diplomat are well-known.”
Perdikis, the wise leader of the Greens, had called on “President Anastasiades to have Mr Eide removed from the procedure because of his behaviour,” and found it outrageous that Akel was now demanding the Norwegian was asked if there were minutes. “We wonder if some have forgotten about the dubious past of Mr Eide,” said the statement, printed on recycled paper.
How naïve were the commies thinking they would get an honest answer from a Turk-loving liar with a dubious past when they know that only our prez speaks the truth.

MORE CONFUSION was created by Nik’s demand that the Turkish side submitted in writing its positions on the Guterres framework, something that Akinci has refused to do. Government spokesman Prodromos Prodromou insisted the Greek Cypriot side’s written proposals on all six aspects of the framework were submitted at Crans Montana on July 5.
But was this the case? A week after the collapse of the procedure, he told Kathimerini: “I want to be clear. After the failure of the dinner I said they (proposals) were withdrawn.” Four months later, he told Phil. “I am not bound by the proposals in any way. When the procedure was over, I said I withdraw the document.”
Asked on Monday if Nik had withdrawn the proposals, PP said: “No, the president never withdrew the proposals and we must talk accurately.”
One thing you can never accuse this government of doing is talking accurately.

HOLIER than thou hypocrite, Odysseas spent much of last week defending his failure to do reservist service after he became auditor general on the flimsy excuse there would be a conflict of interest if he had to carry out an audit of the army unit in which he was serving.
He changed his excuse when it was pointed out there was no law exempting the auditor general from reserve service and for good measure accused Politis of throwing “familiar dirt” at him. He then claimed that it was the practice for the auditor general not do reserve service, but this was only because his predecessor was a woman and her predecessors were over 50 years of age.
Whatever he says, he could have represented Kyproulla in the hypocrisy Olympics after self-righteously criticising public officials for failing to do reservist service and announcing the cabinet had no authority to exempt mayors from service. Only the almighty auditor general can exempt himself, at will, from army service. Incidentally, now that he is over 50 does go on civil defence service or is it standard practice for the auditor general not to waste his Sundays on Cyprus’ version of Dad’s Army?

LAST WEEK we reported how Disy deputy and spokesman Demetris Demetriou publicly admitted he did not do reserve duty because he never bothered registering with the National Guard. Demetriou had owned up because Odysseas had announced that a party spokesman that was not a deputy was one of those skiving off duty.
Subsequently, Odysseas said he was not referring to Demetriou, causing other party spokesmen to go on the defensive. Diko spokesman Athos Antoniades appeared at the Sigma TV studio on Monday lunch-time with his army sack, army rifle protruding from it, to prove that he was not the culprit. A picture of the army sack and rifle was also put on his twitter account.
Of course you can have all the army equipment and never turn up for reservist service, which is what I did, something I am not ashamed to say. In fact I felt rather disappointed that Odysseas made no mention in his revelations of all those who register, get a gun, ammunition, fatigues, army sack and only show up at their unit when it is time to return everything to the National Guard. Why was this group of reservists not even acknowledged by Odysseas?

ELAM spokesman Geadis Geadis also felt aggrieved by insinuations that a proven patriot like him was not serving and issued a rather melodramatic statement, which said: “Unfortunately, some amoralists, that have no respect for human pain and serious health issues, are using my name to deal a blow to Elam, making out, falsely, that I avoid doing reservist duty, a fact that puts me in the disappointing position of lifting medical confidentiality so that public opinion can know the whole truth.
“During my service at the 70th Engineer Battalion I had the misfortune to seriously injure my head, with the result that I suffered permanent damage.” He gave a detailed account of his injury, but you get the point.

REELING from the unflattering European Commission report about its golden passport scheme, the government on Wednesday announced new measures tightening rules and procedures for granting citizenship. I would have thought this was unnecessary, after Prez Nik’s assertion that we have “the strictest criteria of the 20 countries that offer the capability to obtain European citizenship.”
And what is the need to hire a consultancy firm to carry out due diligence on the applicants – another measure announced by the cabinet – when so far, according to the finance minister, no ‘non-clean’ investors have come to Kyproulla?

LAST TUESDAY morning the Cyprus Hilton car park was crawling with cops armed to the hilt because Israel’s President Reuven Rivlin, who was on a state visit, was either staying there or visiting. One of the cops on duty showed why we are special. He had two pistols in his holster, a heavy duty automatic rifle hanging from his neck and a plastic cup of coffee in one hand. He was not smoking though.

A COFFEESHOP customer of considerable wealth, approached us on Friday and asked if he could use our establishment to offer a reward to anyone that finds the missing minutes of the July 4, 2017 meeting at Crans-Montana. Concerned that without the minutes, the Guterres framework would not be included in the terms of reference, he has decided to offer 10,000 euro to the person that finds them.

Our View: Preserving wealth of SGOs costly to the taxpayer

The elephant in the room: the hard border across Cyprus