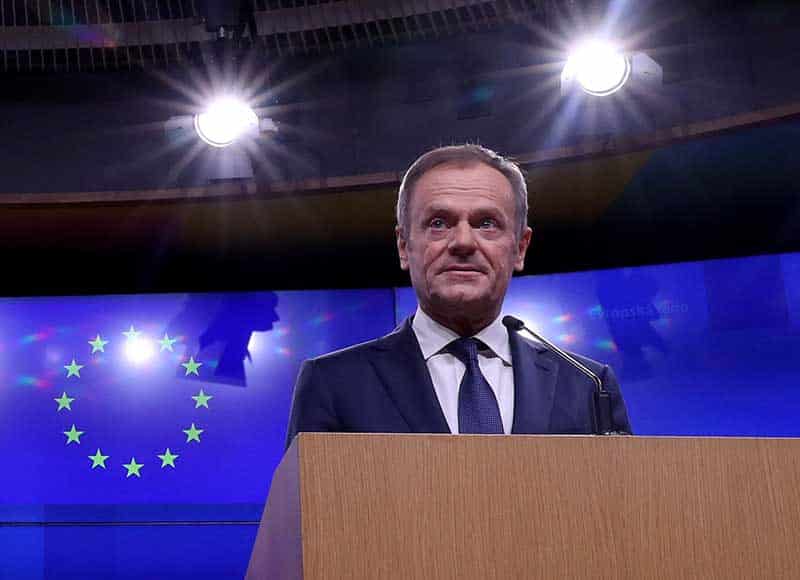 Unlike Northern Ireland there is a hard border in Cyprus complete with barbed wire, minefields and soldiers. Worse still it is perpetuated by an EU protocol that defines it as an EU external border even though it is not an international border.

So the words of Donald Tusk, the president of the European Council, that the EU is first and foremost a peace project that is determined to prevent a hard border in Northern Ireland and his ‘special place in Hell’ dig at Brexiteers ring hollow in Cyprus and the UK.

Donald Tusk was a tough guy in his youth. He had a hooligan phase when he used ‘to roam the streets cruising for a bruising’ in his native Gdańsk in Poland. Somehow he managed to land Europe’s top job but he has not lost the hooligan side of his character. His ‘special place in Hell’ jibe at Brexiteers when talking about Ulster was spoiling for a fight, but the shine has gone off East European politicians and he should be more circumspect when talking as president of the European Council.

The European Council is no place for hooligan behaviour. It sets the EU’s general political direction and priorities. Its president chairs the council’s meetings and moves its decisions forward and represents member states in Brussels. His job is to facilitate cohesion and consensus particularly in the EU’s external and security policy which he shares with the High Representative of Foreign Affairs, at present Federica Mogherini.

I have a lot of faith in Federica Mogherini and her special adviser, my old friend Nathalie Tocci who have great expertise and a genuine concern about the hard border across Cyprus and the sooner they are given a free hand to take the initiative in Cyprus the better.

Donald Tusk was appointed in December 2014 and his second and final term ends in December 2019. He was previously prime minister of Poland but came into prominence on the European stage during the refugee crisis in 2015. His role during the Brexit process has grated owing to his silly use of English idiom borrowed from old pop songs that infuriates sections of the British press. His crowning achievement as president of the European Council was to champion the intolerant values of East European states against Muslim refugees from Syria in 2015 – not a good egg in the eyes of liberal, tolerant Europe.

His anti-Brexit outburst came at the fag-end of an otherwise carefully crafted statement at a press conference in Ireland that had all the hallmarks of fudge and compromise that we have come to expect from the EU.

The statement, which he read with the Irish prime minister by his side, has to be looked at in the round. In summary, he said that the EU tried to reverse the decision of the British people to leave the EU. But owing to the pro Brexit stance of the British prime minister and the leader of the opposition and the absence of any effective political leadership for remain in Britain the EU had finally concluded that Brexit is inevitable end of March 2019.

Therefore the most important task of the EU now is to avoid a no deal scenario. Although the withdrawal agreement between the EU and UK was not open for renegotiation, the EU looked forward to hearing the British prime minister’s realistic alternative proposals to resolve the impasse that arose after the British parliament rejected the terms of the withdrawal agreement containing a backstop.

For the EU the top priority is the issue of the border in Northern Ireland and how to guarantee the peace process under the Good Friday Agreement. The EU ‘was first and foremost a peace project and that it will not gamble with peace’, Tusk emphasised, which was the rationale behind the EU’s insistence on the backstop.

If Britain were able to provide a credible guarantee for peace in Northern Ireland she would leave the EU as a trusted friend. A common solution was possible provided it guaranteed peace and commanded a clear majority in the House of Commons. A sense of responsibility, however, impelled the EU and Ireland to plan for a possible fiasco.

Then in an unscripted non sequitor at the end Tusk went on a frolic of his own that was not cleared with the Irish prime minister. He said: ‘I have been wondering what the special place in Hell looks like for those who promoted Brexit without a sketch of a plan to carry it through safely.’

In Dante’s Divine Comedy the special place in Hell is reserved for those who remain neutral between good and evil. The special place is at Hell’s gate where ditherers are cast in a swirl of clouds of red sand, their faces bitten by wasps and hornets for ever – I thought it was their armpits stung by a thousand mosquitos but I muddled it with an Arab curse.

Donald Tusk used the ‘special place in Hell’ insult with poetic licence since his complaint against Brexiteers is not that they could not choose between good and evil; but rather that they chose evil in promoting Brexit despite its alleged deleterious consequences to the Northern Ireland peace process.

While I was looking up the different punishments in Dante’s Inferno I checked what is in store for hypocrites and politicians who deceive and sow political discord but I have no intention of spoiling anyone’s Sunday further than absolutely necessary, so I shall spare people the gory details save that it all takes place in the pits of Hell’s abyss at circle 8.

Apart from Tusk’s latest silly sound-bite – the ‘special place in Hell’ remark was the latest on the heels of an Instagram post in September last year mocking the British prime minister by offering her cake with a caption of himself saying ‘sorry no cherries’ – the rest of his press statement was conciliatory. Without realising it Tusk, who is not as clever as he thinks, let the cat out of the bag when he impliedly admitted that the ulterior motive behind the backstop was to keep the UK in the EU – encouraged no doubt by experts on the Good Friday agreement like Tony Blair and Jonathan Powell.

I had not heard the word backstop before though I must have come across it in my schooldays at the American Academy in Larnaca when we used to play baseball. Apparently a backstop in baseball is a fence or a net behind the catcher to keep the ball inside the field of play. So it is all in the word: the backstop in Northern Ireland was conceived by the EU more as a legislative tool to keep the UK in the EU rather than as an insurance against a hard border after Britain leaves the EU for good.

The UK government is a serious player in world diplomacy and can be relied on to keep its word without meddling from the EU. The idea that the UK is going to renege on its treaty obligations and needs to give extra legislative assurances enshrined in EU law is insulting to Britain’s amour propre. There will be no hard border in Ireland because the British muddle through these things without an overall system imposed from above.

I shall end where I began – Cyprus. In the preamble to the UK withdrawal agreement there is provision to establish in separate protocols arrangements to address the very specific situations in Northern Ireland and in the Sovereign Base Areas in Cyprus. But no one, not even Donald Tusk who claims the EU is first and foremost a peace project, even noticed the elephant in the room: the hard border across Cyprus.

Tales from the Coffeeshop: Wild goose chase instigated by prez who only speaks the truth