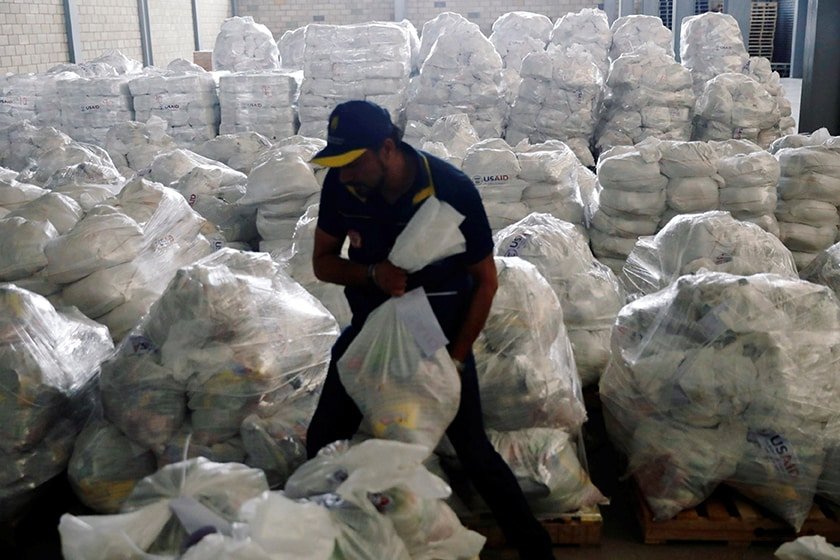 File photo: A worker organises humanitarian aid for Venezuela at a warehouse near the Tienditas cross-border bridge between Colombia and Venezuela in Cucuta, Colombia February 14, 2019.

The Venezuelan political scene which is ominously heading to a conflict and civil war between the so-called democratic versus socialist forces demonstrates, yet again, the role of ideology on the one hand and world economic and political interests on the other.

Russia, China and Turkey (all characterised as oppressive regimes) stand on the side of the socialist regime. On the other, spearheaded by the US, a western democratic parade of European countries including the UK, Germany, France, Canada and some Latin American countries have denounced Nicolas Maduro’s government; declared their support for the opposition and the democratic forces it represents; and recognised its leader Juan Guaido as Venezuela’s interim President.

The US, playing the humanitarian card, has offered economic support with a promise to develop and regenerate the country, establish democracy and take Venezuela out of poverty.  As a first gesture the US has sent food and medical supplies to Colombia’s border with Venezuela.  In response, Maduro has accused the US and European states of engaging in strategies to overthrow the legitimate government and take control of the country.
One cannot but lament the state of Venezuela’s poverty and oppression. But the way in which democratic states have suddenly awakened to the plight of the Venezuelan people and are eager to intervene (and according to Donald Trump “all options are on the table”) to assist the country and turn it into a democracy raises serious questions about both the timing and real motives.  Humanitarian issues did not appear to be of any concern to the US and western states until now. In parallel, humanitarian values do not appear to be of any interest to these states with regard to other oppressive, but “friendly”, regimes across the world. Oppressive regimes in the Middle East and the humanitarian crisis in Yemen inevitably spring to mind. But here lies the difference. These “friendly” regimes which are rich in oil reserves provide western countries particularly the US open access to them. Venezuela’s oil and rich gold reserves have been thus far out of reach.

Venezuela’s vast oil reserves, largely incapacitated by US sanctions, are there for the taking. The emergence of an opposition leader who speaks the US language of democracy and humanitarian principles has provided the US and western states a renewed appetite for taking control and exploiting those oil reserves and, at the same time, keeping Russia and China at bay.

With over 300,000 million barrels of proven oil reserves Venezuela has the world’s largest deposits. It makes rich pickings. A large bulk of the rest of the world’s oil reserves is located in and around the Middle East which partly explains again the western geopolitical interest in the region. Saudi Arabia, Iran, Iraq, Kuwait, UAE and Libya together command over 815,000 million barrels of proven reserves between them.

Oil and natural gas are intertwined with geopolitics. Petroleum products are still the essential ingredient that powers just about everything we make and use: from simple household products to running transport, industries, production and distribution of food and most significantly military hardware including the latest arsenals and technology. As the worldwide oil and gas production peaks but consumer demand increases, competition and friction for their control becomes exacerbated. According to The Belfer Centre at the Harvard Kennedy School, oil is the leading cause of conflict. It estimates that 25 to 50 per cent of interstate wars since 1973 have been linked to oil. The invasion of Iraq in 2003, which ultimately planted the seeds for the violence that has since followed in Syria, the region and elsewhere, was in part about oil. In 2008 Chuck Hagel, the former US defence secretary, openly stated: “People say we’re not fighting for oil. Of course we are.”

Whether one discusses Russia, China or western democracies and the role they play on the international scene there is little to distinguish between them when it comes to the exercise of economic and political power. They may vary in the means they deploy but they share a common goal: striving for hegemony.  It consists of three main tenets. First, to have economic, political and military might to outdo and outlast any other competitor of a similar or diverse political and economic system;  secondly, to have access to raw materials, natural resources (including oil, gas and clean water supplies), capital and markets; and thirdly, to generate a convenient ideology that can be utilised to promote the first two tenets and cement the impression that security, commercial and financial stability depend on the adoption of that ideology.

In the quest for hegemony, and the conditions prevailing, western powers are either keen to support “regime change” (as in Venezuela) by singing the virtues of humanitarianism, freedom and democracy, or they go to bed with willing partners, often despotic and oppressive states, for “regime status quo”. When they choose the latter a miraculous transformation occurs. They turn a blind eye to poverty and human rights abuses. The usual sermons about democratic and humanitarian values vanish from the political vocabulary. In either case, the aim is to achieve access to resources, oil and gas exploitation, multimillion dollars’ worth of trade, sales of weapons and sophisticated military hardware, military installations and surveillance stations, control of technology and communication routes and broader political influences.

Venezuela has been held tentatively together by its main creditors, Russia and China. But due to corruption, political ineptitude, economic mismanagement, its long acceptance and practice of an ideological rhetoric in direct opposition to US interests in the region and hard-hitting US sanctions have all conspired to bring the country to its knees. And here lies the catch.

If its people and particularly its political leaders see it fit to open their doors to western interests in the hope that such action will make a real change to their socioeconomic and political landscape, they may be in for a rude awakening to the fact that there is no such thing as a free gift. By embracing capitalism and accepting the handouts of western democratic states they will have to capitulate to capitalist interests by allowing those interests to exploit and control both the state and the economy including its vastly rich deposits of hydrocarbons and gold. The price to pay therefore will be a new form of subjugation, this time to the whims of their northern neighbours and their allies.

One may desire to be free to make political and economic choices. The reality of international relations, however, means that freedom is an elusive concept and does not equal with social, economic and political wellbeing. The dilemma for Venezuela is whether to remain in denial, believing itself to be free but hazardously poor and vulnerable to all forms of threats to its basic needs and rights for existence, or to transform itself into an obedient servant who is well-fed and looked after by rich and willing new political masters – for a while, of course, until all its assets are stripped. The choice could not be starker.  Basically, it is what psychologists call a double-bind. Damned if you do and damned if you don’t.