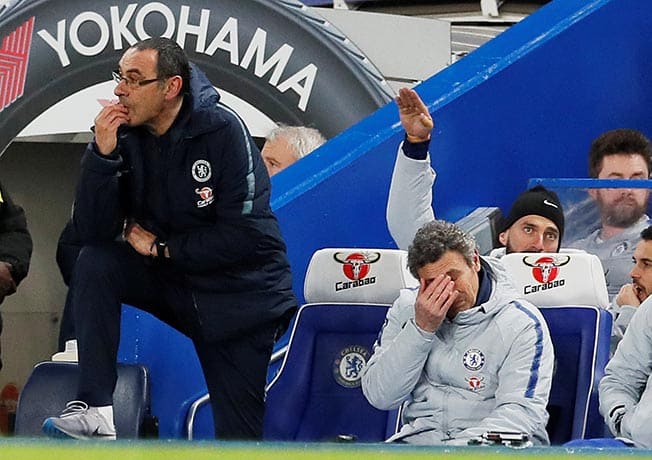 The 2-0 defeat for FA Cup holders Chelsea to Man United on Monday night, which provoked boos from the home faithful at full-time, offered yet more ammunition for those who say Maurizio Sarri was not the man to replace Antonio Conte

Maurizio Sarri was left picking over the bones of Chelsea’s FA Cup exit against Manchester United on Tuesday as the odds shortened on him suffering the same fate as Luiz Felipe Scolari and Andre Villas-Boas in failing to last a season as Blues manager.

The chastening 2-0 defeat for the holders on Monday night, which provoked boos from the home faithful at full-time, offered yet more ammunition for those who say the Italian was not the man to replace Antonio Conte.

As he has done after similar setbacks, the former Napoli boss spoke candidly after the game – but rather than offer clarity his comments muddied the water.

Admitting that his players do not completely understand what he wants from them a full seven months into his reign hardly inspires confidence in his methods from the fans, the club’s hierarchy or those in the dressing room.

“Not completely at the moment because, especially in a situation like the second half, we have to move the ball faster mentally and materially,” Sarri told reporters when asked whether his message was getting across.

“We need more movements without the ball and less individual actions.”

After defeat at Arsenal last month, Sarri said his players were “difficult to motivate”. Earlier in the season, after a limp defeat at Tottenham Hotspur, he turned his ire on N’Golo Kante, suggesting the twice Premier League-winning midfielder lacked the technical attributes to play in his favoured central role.

Considering both are playing in their less-favoured positions to accommodate the so-called possession-based ‘Sarri-ball’ system – a fact bemoaned by most fans – criticising them looks risky.

On Monday, Chelsea supporters joined in with Manchester United fans’ chants of “Getting Sacked in the Morning”. Sarri’s side were outplayed by a United whose season has gone in a very different direction since Mourinho was sacked as manager in December.

“I’m worried about the results, not the fans,” Sarri said in response to their angry reaction to a defeat which came barely a week after a 6-0 hammering at Manchester City.

Sarri’s side face Malmo in the second leg of their Europa League last 32 clash on Thursday, and three days later take on Pep Guardiola’s City again in the League Cup final at Wembley before a home Premier League clash with Tottenham.

If Chelsea beat City on Sunday Sarri’s prospects might brighten. But the mood around the club suggests that is unlikely with Chelsea losing five of their last 10 games in all competitions – as many defeats as they suffered in their previous 41.

It is all a far cry from Sarri’s record-breaking start when he became the first new manager to go unbeaten in his first 12 Premier League games in charge.

With Chelsea now down to sixth in the Premier League, former Chelsea striker Chris Sutton, commentating on the game on Monday, believes the club’s managerial revolving door will soon be depositing Sarri out on the pavement.

“Sarri-ball is broken,” said Sutton. “Would the owner fancy getting into the top four with recent performances, with a manager who says he can’t motivate his players?

“He’ll be thinking, ‘Will we get top four? Can I go to the Manchester City game with confidence?’ Absolutely not. Is he going to chuck all his eggs in the Europa League basket with a manager who can’t motivate his players? No.

“History tells us the Chelsea owner doesn’t mess about.”

Get a gourmet taste of White Walker