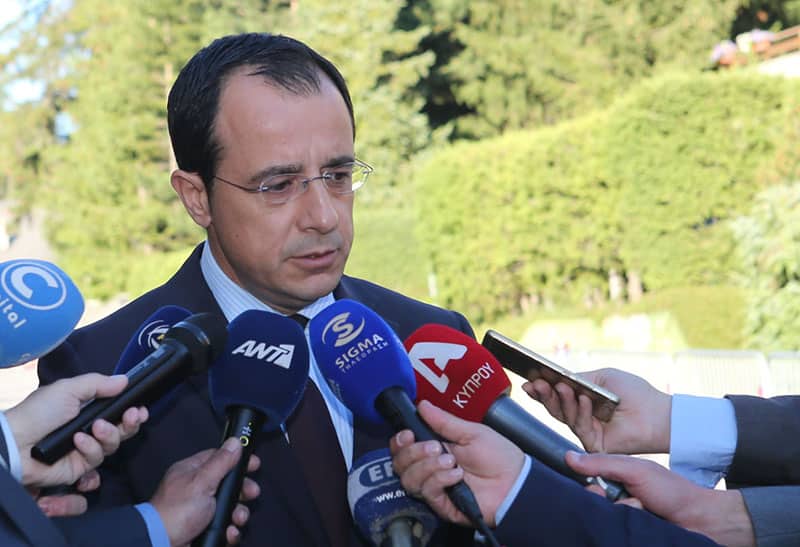 The government will make sure UN envoy, Jane Holl Lute, will be thoroughly informed on the meeting in Crans-Montana on July 4, 2017 that concerns clarifications to the Guterres framework, Foreign Minister, Nicos Christodoulides said on Thursday.

Christodoulides expressed hope that the meeting next week of the two leaders would create conditions that could lead to an agreement on the terms of reference for the resumption of talks.

The government insists that a document with the minutes of a meeting that took place in the morning of July 4 during the talks in Crans-Montana about clarifications on the Guterres framework was crucial for the Greek Cypriot side. Without these minutes the terms of reference will be incomplete, the president had said.

Christodoulides said that efforts are already underway for Lute to be informed on what had been discussed that day in connection with the framework set by the UN Secretary-General.

Speaking to state broadcaster CyBC radio, Christodoulides said that it was not only the Greek Cypriot delegation present at that morning meeting where clarifications were given by the then UNSG Special Adviser, Espen Barth Eide, on the Guterres Framework.

“There were also representatives of all the parties involved,” he said.

Apart from the meeting in question, there were other meetings the same day where Eide, had repeated what took place that morning that clarified all points.

“We are therefore on the right track to let Mrs Lute be fully informed of everything that was discussed that morning,” Christodoulides said.

On why the UN Secretary-General did not brief her himself, Christodoulides said that the UN envoy gathers information from everyone present at the July 4 meeting on what had been discussed that morning.

Lute has already had contacts in the UK, he said, and next week will be in Greece, where she is to meet with the Greek foreign minister.

“She will definitely go to Turkey and we hope that new data come out of these meetings,” he said.

The wish, however, of Turkey that the talks resume after July this year was a negative development, he said.

“We insist that this must be done without delay so that we can see through substantive discussions how prospects are created that lead to positive results,” he added.

Meanwhile, former Greek Foreign Minister, Nicos Kotzias, who was on the island this week for the launch of his latest book on the Cyprus problem, confirmed that the July 4 minutes exist.

“I imagine they have them but do not present them so as not to cause any tension with anyone,” Kotzias told CyBC on Wednesday. He said that the UN probably won’t present the document so that it can protect itself because the content might dissatisfy one of the parties involved, and he accused the UN of turning against one of the two sides.

Kotzias also urged the government to keep an eye on Lute, as he has done on Eide.

He said that one must not be too convenient and agree to everything the envoys ask.

“We must never give the impression we make concessions easily,” Kotzias said.

He said he trusted Guterres but he did not trust Eide. “He was lying to us,” Kotzias said, adding that during the talks in Crans-Montana he was presenting his own positions as those of the UN Secretary-General.

Kotzias expressed concerns that Guterres will no longer be on top of things as he wasin 2017 due to the many problems he has to address elsewhere in the world.

The UNSG, he said, will rely on what his envoys, his Special Representative Elisabeth Spehar and Lute tell him.

Kotzias said that, after Eide left his post to pursue a political career, he had asked Guterres to remove Spehar as she was Eide’s aide and he had failed his mandate.

The former foreign minister called on Cypriot politicians who call him a liar as regards his account on what had transpired at the talks in Switzerland, to publicly say how they know what had happened since they were not at the negotiating table.

“How do they know what took place that night better than us who were there?” he asked.

He said that they either received information from Eide, the Turkish Cypriots or the Turkish side. “Why do they trust them more?” he asked.

Fit-again Kane in contention for Spurs trip to Burnley