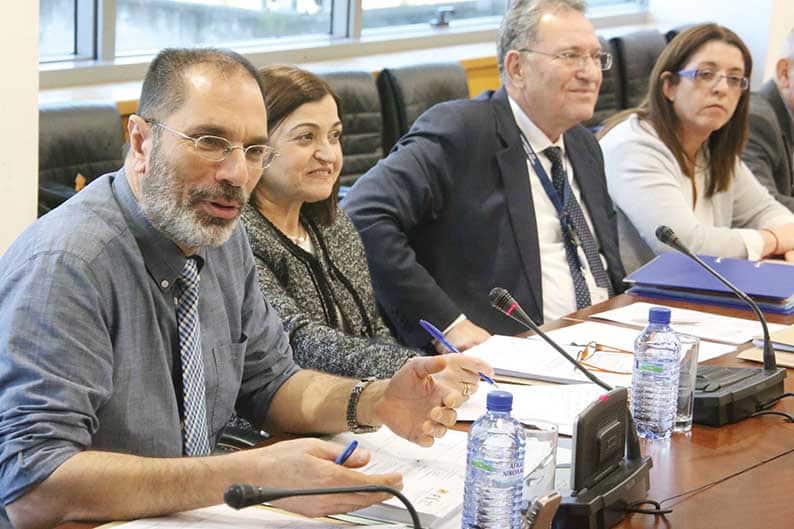 Auditor-general Odysseas MIchaelides at the House on Thursday (Christos Theodorides)

The Limassol district land registry is operating like a free-for-all, with staff frequently covering for one another by punching in coworkers’ cards – the most glaring case occurring recently where an employee punched in for a colleague who, unknown to him at the time, had died the night before.

The reveals came out at the House watchdog committee, discussing cases of misconduct reported to the auditor-general.

A land registry employee at the Limassol office had reported 24 instances of delinquency at the workplace. For his trouble, he was subsequently transferred elsewhere, in what he described as a vindictive act by his superiors.

The employee had initially tried to report these goings-on to his superiors, but was ignored, which was why he turned whistleblower and contacted the auditor-general.

The man, who was also in parliament describing his experience, said he was told at the time by a colleague that the director of the land registry, Andreas Socratous, was “furious” with him for “being troublesome.”

In the most blatant example, an employee had punched in on behalf a colleague who was deceased at the time.

On January 14 this year, the employee punched in for his colleague Christos Michael, unaware that Michael had been murdered the previous night.

The cheating employee was issued a ‘severe’ written reprimand for trying to ‘cover’ for Michael.

Michael, 44, was shot dead in his car in a field in Polemidia on the evening of January 13. Police have charged three men, all brothers, who are to stand trial for premeditated murder in April. The men have reportedly confessed to the crime, saying they wanted to rob the victim.

On Michael’s person police found a gramme of cocaine and €4,200 in cash.

“The least that can be said about this is that the manager’s supervision is inadequate.”

Other complaints of dodgy practices at the land registry included irregular or entirely bogus reimbursement claims for travel expenses and for overtime pay, as well as apparent favouritism toward certain businessmen.

In one instance, the Limassol land registry office valued a plot of land in Ypsonas. It later transpired that a villa was located inside the plot. But the official ‘forgot’ to update the file with that information.

The auditor-general will be asking the interior ministry to conduct an investigation into all these reports.

In parliament, MPs piled on Socratous, the director of the department of lands and surveys.

Socratous conceded that problems existed, but pushed back, arguing that complaints should go through the proper channels rather than being sensationalised.

He and MP Pavlos Mylonas had a heated exchange, with the latter accusing the former of seeking to sweep problems under the rug.

“This code of silence [in the civil service] needs to be broken. People who blow the whistle should be afforded protection,” Mylonas said.

Plan to link road tax to emissions agreed by lawmakers