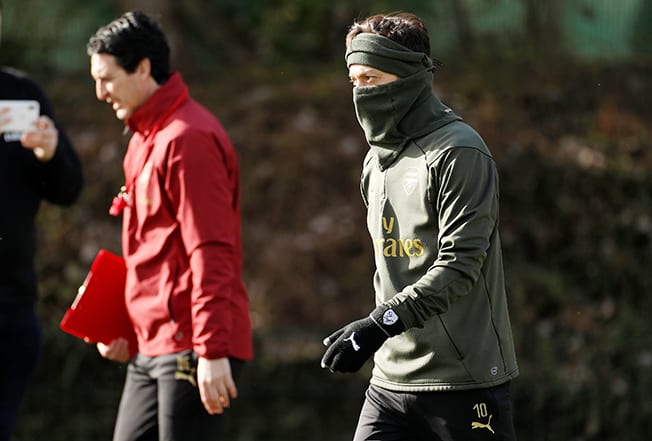 Mesut Ozil trained on Wednesday ahead of the Europa League last 32 return leg on Thursday, where the Gunners will be looking to overturn a 1-0 loss to BATE in Belarus

Unai Emery has told Mesut Ozil he needs to shake off his minor injuries and illnesses to earn a regular place in the Arsenal side.

Ozil missed last week’s Europa League round of 32 first-leg defeat to BATE Borisov as he was still feeling the effects of a sickness bug, with Emery opting to leave Arsenal’s highest-paid player at home.

The 30-year-old trained on Wednesday morning ahead of the return leg on Thursday, where the Gunners will be looking to overturn a 1-0 loss in Belarus.

Emery has faced questions on an almost-weekly basis about the former Germany international after taking the decision to drop him from the team on several occasions.

Ozil’s performances have tailed off in recent times, with ex-Arsenal manager Arsene Wenger questioning whether his new, club-record contract had left the player in the “comfort zone”.

Emery disagreed but did say the player has to train more consistently if he is to be selected in the future.

“First, mostly, the key is in his hand,” the Spaniard replied when Wenger’s opinion was put to him “And he is working very well this week. I ask him in our conversations to be consistent. To be available for us training.

“When you can train with regularity, consistency, you can help us after in the games. Now I think this week is good for all the players because we are in an important moment for the season.

“He needs to be consistent, be available for training, for the matches. Without the injuries, without being sick. Like that, I think we can see the best Mesut with us.”

BATE stunned Arsenal last week by securing a 1-0 lead to defend at the Emirates Stadium, with the Belarusian champions having not played a competitive game since mid-December.

Emery’s side will remain heavy favourites to advance given the gap in quality between the two sides – but he suggested he was prepared for a long evening on Thursday.

“For us tomorrow is a very important match,” he added.

“It is also very important to play in our stadium with our supporters, and we need their support for this match and I hope there is a big atmosphere for us.

“Together, with their support, I know our players can play and give their all.”

The kick-off time for the second leg has been much talked about since the draw – with Arsenal’s game shifted to an earlier time of 5.55pm due to a clash with Chelsea’s Europa League tie with Malmo at Stamford Bridge.

Having originally been slated to take place a day earlier, and with a 5pm kick-off, the club successfully lobbied UEFA to rethink the issue – although the Arsenal Supporters’ Trust remain upset with the decision and what it could potentially lead to later in the tournament.

“We are writing with regard to Arsenal’s match against Bate this coming Thursday in the Europa League which will kick off at 17.55pm on Thursday,” an AST open letter to UEFA read.

“This is a totally unacceptable and inconvenient kick-off time for a vast number of Arsenal fans who have to travel to the game after work from across London, the south-east and further afield.

“The result will be a huge number of empty seats and many fans having to pay for a ticket on their season tickets which they cannot use.

“This is both unfair on Arsenal supporters and will lead to a poor atmosphere in the stadium.

“Can you also give a reassurance that having been faced with this situation that UEFA will ensure that such scheduling does not occur again.

“We look forward to hearing from you and are available to discuss with you or a relevant colleague.”