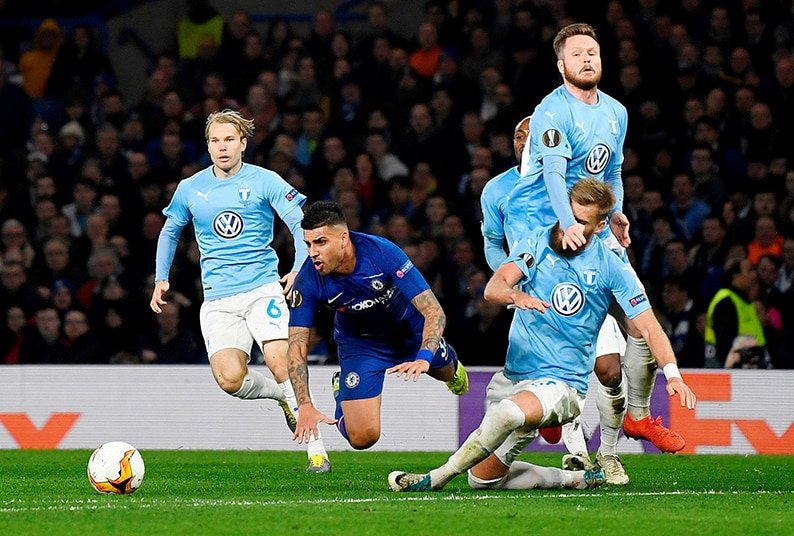 Chelsea progressed in the Europa League with a 3-0 win over Malmo which will do little to quell the sense of inevitability that Maurizio Sarri’s spell as head coach is nearing an end.

Goals from Olivier Giroud, Ross Barkley – both of whom scored in the first leg – and Callum Hudson-Odoi saw the Blues complete a 5-1 aggregate success in the last-32 tie, earning a place in Friday’s draw for the last 16.

Malmo finished the game with 10 men as Rasmus Bengtsson was sent off for two bookable offences 17 minutes from time, and two of the Blues’ goals followed the defender’s dismissal.

Whether Sarri is in position for the next round could be determined by results and performances in Sunday’s Carabao Cup final with Manchester City and next Wednesday’s Premier League clash with Tottenham.

Giroud has been something of a saviour this season in the Europa League, a competition which offers a route into the Champions League for the winners.

The France striker has six goals in seven appearances after his 55th-minute tap-in followed fine play from N’Golo Kante.

Chelsea had been jittery until that point, the anxiety stemming from Anders Christiansen’s goal 10 minutes from time in Sweden, which ensured Sarri had to strike a balance in team selection ahead of Wembley.

City had inflicted a humiliating 6-0 loss on February 10 which made Sarri’s position precarious.

Seven changes were made to the side which lost 2-0 to Manchester United in Monday’s FA Cup tie, with Cesar Azpilicueta, Antonio Rudiger, N’Golo Kante and Mateo Kovacic retained.

Willy Caballero deputised in goal for Kepa Arrizabalaga, who has a hamstring problem and is a doubt to face City.

The inclusion of winger Callum Hudson-Odoi was met with the approval of the home support which had so publicly derided ‘Sarri-ball’ on Monday and joined in United fans’ chants of “you’re getting sacked in the morning”.

Privately, Chelsea did not expect this Malmo contest to be defining in Sarri’s future, anticipating progression would be a mere formality with the cushion of two away goals.

Yet Malmo supporters were expectant and vocal and there was an early warning as Andreas Vindheim’s cross was headed narrowly off target by Bengtsson.

Giroud headed wide from a Kante cross before further chances for Malmo.

Arnor Ingvi Traustason fired wide and Markus Rosenberg, once of West Brom, turned Rudiger and shot past the post.

Johan Dahlin saved a Barkley shot from the edge of the area and some boos accompanied the half-time whistle.

Chelsea and Malmo face further UEFA disciplinary charges from the first leg and more are likely to follow.

Malmo fans lit flares before the start of the second half and a pitch invader emerged from the home section and goaded the visiting fans as he was escorted off after 53 minutes.

Hudson-Odoi showed flashes of trickery while Eden Hazard warmed up, but the Belgian was not needed.

Kante used his supreme anticipation and pace to win the ball in midfield and burst forwards to create the opening goal.

Kante fed Willian on the left and the Brazil forward crossed for Giroud to tuck in.

Bengtsson was sent off for a second bookable offence after 73 minutes, when he felled Emerson Palmieri on the edge of the area.

Barkley curled the resulting free-kick into the top corner.

There was further reason to cheer for Chelsea as Hudson-Odoi cut in from the right and fired in across goal. He had been linked with a January move to Bayern Munich and the Blues faithful called for the winger to stay after his goal.

There was no such call for Sarri but his seven-month spell continues, for now.