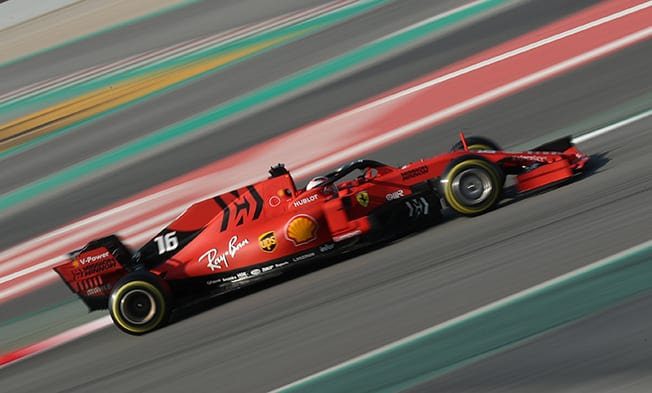 Ferrari newcomer Charles Leclerc has played down talk of his Italian team being faster already than Formula One champions Mercedes and said he suspected rivals were hiding their true pace.

Speaking after Mercedes driver Valtteri Bottas told reporters on Thursday that Ferrari looked like they were a step ahead in pre-season testing, the Monegasque suggested appearances were deceptive.

“The performance has no sense for now,” the 21-year-old said on the final day of the first test at the Circuit de Catalunya. “It remains testing and they are probably not pushing and we are not either.

“We don’t how much the others are ‘sandbagging’,” he added, referring to the pretence of being weaker than is actually the case.

The sport’s oldest and most successful team have also covered an impressive amount of mileage in their new SF90 car while Mercedes have been working through their programme without setting any truly eye-catching times.

“No matter which kind of fuel load or engine modes they are running, whatever you try to correct that for, in any case they are quick on short runs and long runs,” said Bottas.

“I think we feel at this point they are maybe a bit ahead, but obviously it’s impossible to make detailed calculations. It is very early days. With the new rules its going to be a big development race.”

Bottas said the cars would be very different by the time of the Melbourne race on March 17 and Mercedes had new parts coming before then.

The Finn warned, however, that even with the upgrades Mercedes still needed to make the car better and quicker, with work to do on the balance.

“It feels a little bit different (to last year), at least in these (winter) conditions,” he said. “It seems to be again, with the tyres, quite a narrow window to get them to work.

“It seems like balance-wise a little bit on a knife-edge at the moment. But there’s nothing fundamentally wrong, we feel. I think there is definitely a lot of potential but it is not yet quite there.

“In the team, (there is a) kind of … excitement to discover more about the car and really try to improve it because at this point it looks like we are not miles ahead of everyone. It seems like Ferrari are in a better place.”

Mercedes have said they intend to focus more on speed and performance at next week’s second test after mainly concentrating on reliability until now.

Hamilton also recognised Ferrari were quick when he spoke to reporters earlier in the week but said that was the case in testing last year and Mercedes prevailed in the end.

Ferrari last won a constructors’ championship in 2008, the year of Hamilton’s first drivers’ title with McLaren.

Increasing the number of boarders