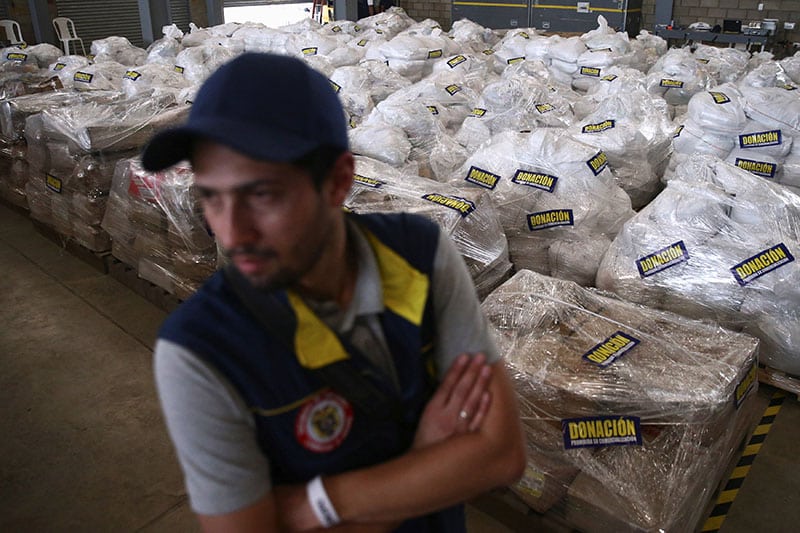 Sacks containing humanitarian aid are pictured at a warehouse on the Tienditas cross-border bridge between Colombia and Venezuela in Cucuta, Colombia February 21, 2019. REUTERS/Edgard Garrido

By Angus Berwick and Sarah Marsh

CARACAS, Feb 21 (Reuters) – Venezuela President Nicolas Maduro threatened to close the border with Colombia on Thursday as opposition leader Juan Guaido and some 80 lawmakers ran a gauntlet of roadblocks trying to get to the frontier to receive humanitarian aid.

Guaido, who is recognized by dozens of countries as Venezuela’s legitimate head of state, was poised for a showdown with Maduro’s government on Saturday, when the opposition will attempt to bring in food and medicine being stockpiled in neighboring countries.

Maduro denies there is a humanitarian crisis and said on Thursday he was considering closing Venezuela’s key border with Colombia and would close the country’s other main border with Brazil, effectively shutting off any legal land access.

The government has said soldiers will be stationed at official crossing points to repel any “territorial violations”, although the opposition could attempt to cross anywhere along Venezuela’s porous borders.

“I charge (Colombian President) Ivan Duque with any violence that might occur on the border,” Maduro said in televised comments, surrounded by the military high command.

Venezuela has already closed its maritime border with the Dutch Caribbean islands of Aruba, Curacao and Bonaire, after Curacao’s government said it would help store aid.

Opposition lawmakers set off from Caracas in a convoy of buses just after 10 a.m. on a 800-km (500-mile) road trip to the border with Colombia. Crowds formed alongside a main highway out of the capital, waving Venezuelan flags and whooping in support.

A roadblock at a tunnel some 100 km (60 miles) along the main road forced several buses to stop, Reuters witnesses and lawmakers said. Lawmakers trying to get through scuffled with soldiers in riot gear at the tunnel’s exit, TV footage showed.

“We have a commitment and that is to reach the border. We will try to get as far as we can,” lawmaker Mariela Magallanes told Reuters by telephone from the scene. “Humanitarian aid is not the whim of a few lawmakers, it is a necessity.”

Magallanes said her vehicle managed to pass through the tunnel after being stuck for several hours but other buses remained behind.

Lawmakers said Guaido’s vehicle continued but his exact location was being kept a secret due to security concerns.

One opposition lawmaker in southeastern Bolivar state said he and some 20 other politicians would also travel to the border with Brazil.

The Information Ministry did not respond to a request to comment.

Guaido still has not provided details on how the aid could come in. Opposition figures have suggested forming human chains across the land borders to pass packages from person to person and fleets of boats arriving from the Dutch Caribbean islands.

The opposition says it is rallying relief efforts in Venezuela to alleviate widespread food and medicine shortages in the wake of its hyperinflationary economic collapse. The oil-rich economy has halved in size in five years.

Tons of aid sent by the U.S. and Colombian governments is sitting in warehouses on the Colombian side of the border. Guaido tweeted late on Thursday that Chile was also airlifting supplies there, while Brazil’s government said it was sending aid to its own border.

Meanwhile a boat carrying 250 tons of aid left Puerto Rico’s capital of San Juan headed for Venezuela on Wednesday, the local government said in a statement.

Maduro accuses the Trump administration, which has levied crippling sanctions against his government, of seeking to force his ouster.

The U.S. special envoy for Venezuela, Elliott Abrams, will lead a government delegation accompanying the delivery of aid from Florida to Cucuta via military aircraft between Thursday and Friday, the Department of State said.

Meanwhile, the office of U.S. Vice President Mike Pence said he would fly to the Colombian capital, Bogota, on Monday to discuss the crisis with leaders of the regional Lima Group of nations.

Guaido invoked the constitution to assume an interim presidency on Jan. 23 and denounces Maduro as an usurper. Maduro still retains the support of powerful nations like Russia and China, as well as the key backing of the military.

Some political analysts say Saturday’s border showdown is less about resolving Venezuela’s needs and more about testing the military’s loyalty by daring it to turn aid away.

“It’s part of this calculus that sees the military as leading a transition in Venezuela,” said Geoff Ramsey at the Washington Office on Latin America (WOLA), a thinktank.

Guaido has offered amnesty to military officers who disavow Maduro, though few have so far done so.

Former military intelligence chief Hugo Carvajal, who Washington accused of involvement in the drug trade a decade ago, released a social media video on Thursday offering his support for Guaido. Carvajal distanced himself from Maduro in 2017 by opposing the creation of an all-powerful legislature.

“I’m sure that Venezuela will soon return to democracy … How this happens depends on you, brothers in arms,” he said, addressing the military.

Gustavo Marcano, senior aide to the opposition’s envoy to Washington, told reporters in the U.S. capital on Thursday that 11 diplomats in the United States have defected from Maduro’s government since Guaido declared himself interim president.

Bank accounts for Venezuelan embassies and consulates in the United States had been frozen, he said.

News podcast: Who owns your data when you die