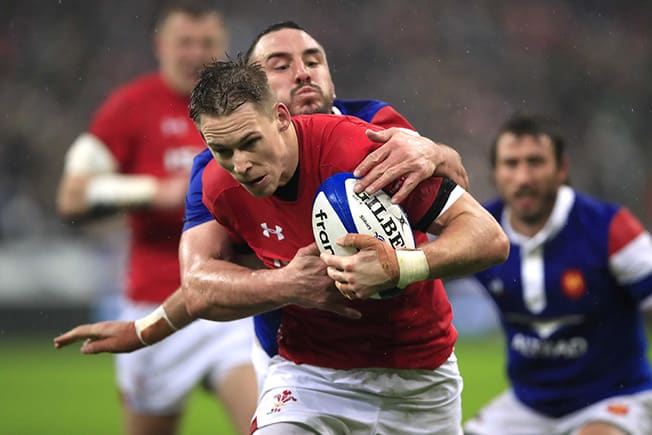 Wales' Liam Williams runs in to score a try against France

Everyone else in rugby enjoys an England defeat for a variety of historical reasons but the neutrals will be behind Wales in Cardiff on Saturday in the more prosaic hope of preserving some uncertainty in the outcome of the Six Nations championship.

England and Wales are the only two teams to have won their opening two games and victory for Eddie Jones’s team, who next face Italy and Scotland at Twickenham, would make them odds-on for a grand slam.

Should Wales win, however, particularly after their failure to take any bonus points from their first two games and with a last-day match against defending champions Ireland to come, the excitement will be high right through to “Super Saturday” on March 16.

England start favourites on the back of their superb wins over Ireland and France, where their rivals had no answer to their inventive kicking game and the high-speed chasing of winger Jonny May in particular.
They are without Mako Vunipola, the prop who has done so much damage since his return, winger Chris Ashton and lock Maro Itoje, but they look immensely strong in every department and it is as settled a side as Jones has assembled since his arrival.

England have won their last five championship games against the Welsh, though that run was punctuated by the little matter of the World Cup pool game at Twickenham in 2015 when Wales pulled off a memorable triumph.

Wales fans will also look to draw inspiration from 2013 when a confident England team under Stuart Lancaster travelled to Cardiff seeking victory to secure a grand slam and instead were routed 30-3 in an amazing atmosphere under the closed roof of the now-Principality Stadium.

Another Welsh success on Saturday (1645GMT) would set a national record of 12 consecutive victories, a run that prompted Jones to fire an early barb a few minutes after the France victory by describing them as the best Wales team ever.

They looked a long way from that in the first half in Paris as they trailed 16-0, but showed admirable resilience to fight back to win the match.
A much-changed team then did enough to get past Italy in Rome but they will have to step up considerably to knock England off their stride.

They should at least be better equipped at fullback to deal with England’s probing kicks, either through Liam Williams or the returning Leigh Halfpenny. They will also be on their toes from the start after England have scored a try in the first three minutes of their last five games.

France and Scotland, who meet in Paris in Saturday’s 1415GMT kick off, are both desperate, but for differing reasons.
Halfbacks Morgan Parra and Camille Lopez were vocal in their criticism of the preparation by France coach Jacques Brunel and have both been dropped from the match squad.

Brunel says the decision was for “sporting” reasons rather than as a punishment as he seeks to turn around a dire run that has seen them lose 15 of their last 19 games.

Romain Ntamack, 19, has been thrown in at flyhalf, alongside Toulouse team mate Antoine Dupont and the one consolation for French fans trying to make sense of Brunel’s selection policy is that the team can surely not be as bad again this week.

Scotland’s hopes of a rare win in Paris have been hit by a spate of injuries, with key backs Stuart Hogg, Huw Jones and Finn Russell all ruled out to severely undermine coach Gregor Townsend’s commitment to high-speed attack.
The Scots have not won in Paris for 20 years and only twice in the last 50.