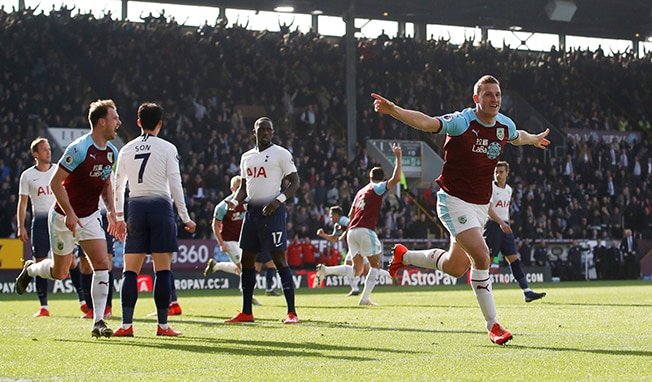 Harry Kane scored on his return from injury for Tottenham but his side fell to a surprise 2-1 defeat at Burnley, which severely dented their Premier League title hopes on Saturday.

Ashley Barnes’ 83rd minute winner for Burnley extended their unbeaten run to eight games and moved them up to 13th place in the league.

But for third-placed Spurs, who trail leaders Manchester City and Liverpool by five points, this may prove to be a loss that leaves them with too much ground to make up.

Burnley took the lead in the 57th minute with a glancing header by striker Chris Wood from a Dwight McNeil corner.

But eight minutes later Kane, playing his first game since he suffered an ankle injury on Jan. 13, ran on to a quick throw-in from Danny Rose and slipped the ball past Tom Heaton.

The Clarets, who have been in or around the relegation zone for most of the season, grabbed the winner though when substitute Johann Berg Gudmundsson found Barnes at the back post and the striker fired in his fourth goal in as many games.