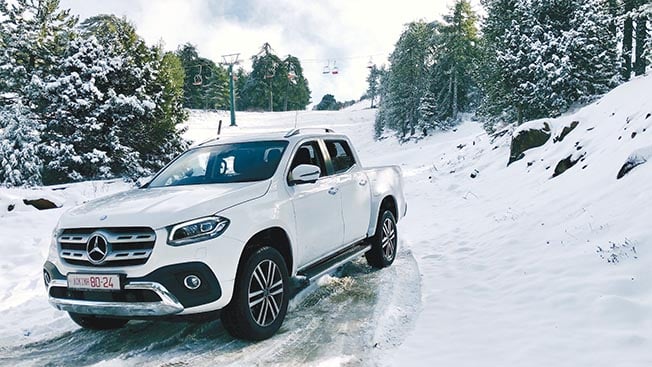 In a country that historically and stereotypically idolises both the pickup truck and Mercedes-Benz brand, the X-Class received plenty of attention on the roads

Mercedes certainly raised a few eyebrows when they decided to build a pickup truck. The oldest surviving luxury car producer making a utilitarian, flatbed truck? A recipe so oxymoronic that the result, good or bad, was sure to be a very interesting vehicle.

We don’t usually associate luxury German car brands with pickup trucks. Ignoring a rather mediocre attempt by VW with the Amarok, it is an area of the market dominated by the Japanese brands here in Cyprus. You think pickup truck and you think Mitsubishi, Suzuki, Nissan or Toyota. You certainly do not think Mercedes.

Sure, they’ve been making the G-Class for decades, but that has morphed into an overpriced accessory that exists and thrives in a market of its own. The X-Class is far from a flashy status symbol. In fact, it shares the majority of its components including the chassis, engine, suspension and gearbox (on this particular model) with the rather more modest Nissan Navara.

So, in creating Europe’s ‘first luxury pickup truck’, have Mercedes found a cool niche in the market, or is this just an overpriced remake of a Nissan?

To find out, I drove a brand new X250d all the way from the seafront to the highest point in Cyprus on Mount Olympus. It’s a handsome looking thing, especially with the 19-inch alloy wheels on this car. Add this to its big front grille and sharp daytime running headlights and the X-Class appears a tidy but not revolutionary rendition of the utilitarian silhouette that we are very used to here in Cyprus.

What is very strange, is the three-pointed star it proudly adorns. I have driven some nice cars, but never have I been stared at the way I was driving the X-Class. Everyone seemed to have the same curious look on their face – a Mercedes? Pickup truck? Even a policeman snapped a photo as we drove by. This particular car was one of the first on the road, imported from the UK by an eager owner before the car was even available in Cyprus.

Price-wise things are interesting. While we don’t know what the X-Class will cost when it lands in Cyprus, I can tell you that in the UK it starts at around £35,238 and tops out well over £50,000 when heavily optioned. Three power levels are available, and bear with me because this can get a little confusing.

The 220d comes with a six-speed manual and two-wheel drive, although predictably this model has accounted for very few sales so far. The 250d can be optioned with a seven-speed automatic, again shared with the Navara as well as non-permanent four-wheel drive that can be activated by a switch at speeds under 100km/h.

The 350d gets Mercedes’ 4matic permanent four-wheel drive system, as well as being the only model in the range to get the Mercedes 7G Tronic gearbox found on the majority of other models. Hence the range-topper is undoubtedly going to feel the most familiar to those who have owned or driven a Merc in recent years, while the 250d I drove was a different experience altogether.

Power is adequate – it managed to haul four heavy guys plus a truck bed full of Zorbas to the top of the mountain without much hassle, but 11.8 seconds to 100km/h is not exactly brisk and overtakes do require a little planning. It is nowhere near as punchy as the 250d engines made by Mercedes, such as on the GLC250d or E250d. The steering is surprisingly good for a truck and it has a great turning circle, although the brakes can be vague at times. Saying this, when required, the ABS worked a treat in the snow.

The switch activated four-wheel drive system makes the car feel sluggish when engaged but works a treat off-road. I took the car up a couple of icy, snow-covered paths and it managed well, sending power to whichever wheel had the most traction and hauling the car along without too much hassle or slip.

The interior is where things really take a step up from anything in the pickup market. This one was specced with beautiful wood and comes with chrome ‘X’ shaped aircon vents, a crisp infotainment screen (that was unusually laggy for a Mercedes it must be said) and a leather-coated steering wheel with buttons for navigating the various settings. The only carry-overs from its sister car are the gearlever and starter button, but all in all it is definitely a much nicer place to sit than any other pickup currently on the market.

So, should you actually buy the X-Class when it comes to Cyprus? It doesn’t make perfect sense, but then again it doesn’t have to. With Tesla and their gullwing door bearing Model X proving that a sense of humour is appreciated amongst today’s buyers, this is the Germans’ way of showing that they too can be unnecessary and fun.

My advice is that if you’re in the market for a pickup truck anyway, and don’t mind the 15 per cent premium over a Navara for a slightly more refined vehicle, then the X-Class is absolutely worth it. But don’t think for a minute that this is a replacement for your SUV. The X-Class does little to bridge the gap between a pickup truck and an SUV, and should you not require the extra cargo space, a GLE or BMW X5 will better the X-Class in pretty much every category.

But for those who can I say why not? Sure, with all its Nissan parts it might only be a ‘semi-skimmed’ Mercedes, but in a country that historically and stereotypically idolises both the pickup truck and Mercedes-Benz brand, I don’t think this really matters. Just be warned, it may perform like a pickup truck, but it won’t be priced like one. 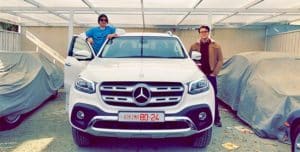 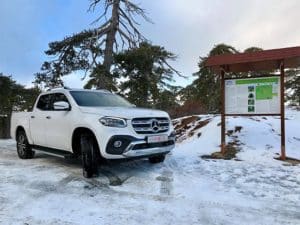 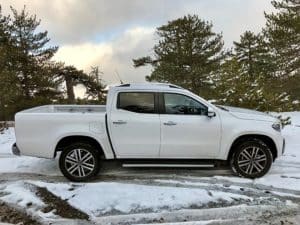