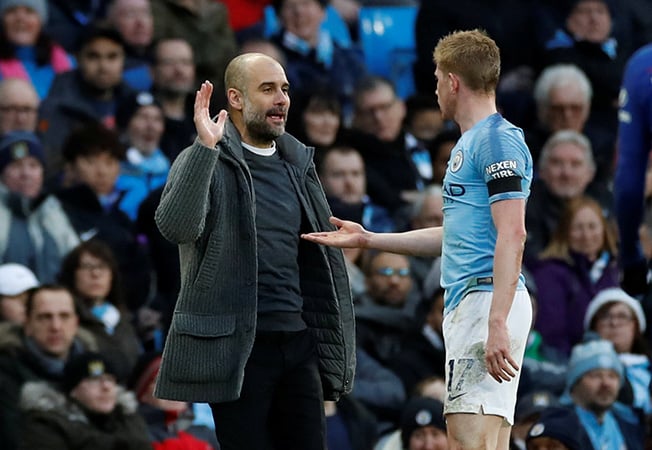 ON and off the field Chelsea will have their backs well and truly against the wall when they take on an irrepressible Manchester City side in the League Cup final on Sunday.

Thursday night’s 3-0 home win against Malmo in the Europa League offered some brief respite for under-fire manager Maurizio Sarri but he remains favourite for the chop.

A 6-0 hammering by Manchester City in their last Premier League outing left Chelsea sixth in the table and struggling to claim a Champions League spot via a top-four finish.

Last weekend’s 2-0 home defeat in the FA Cup fifth round by Manchester United saw some of the Stamford Bridge faithful turn on the Italian who admitted afterwards some of his players still do not understand his so-called “Sarri-ball” tactics.

As if poor form on the pitch was not enough, Friday’s announcement that the club was banned from the next two transfer windows because of breaches of FIFA’s rules relating to the international transfers of minors, deepened the gloom.

The week could still end well, however, if Chelsea upset a rampant City and claim the season’s first domestic silverware in what will be the first major final between the clubs.

Should that happen it would be Sarri’s first trophy as a coach compared to the 20 major honours collected by City manager Pep Guardiola.
City will be on a high after Wednesday’s 3-2 Champions League win away to Schalke — their 13th victory in 14 matches in all competitions.
While that is a stark contrast to Chelsea’s stuttering run, during which they lost five of their 10 matches before the win over Malmo, Guardiola is concerned that the London club will be stung into action by their mauling at the Etihad.

“I don’t like to play in a short period of time against one team when you have beaten them,” Guardiola, whose side top the Premier League on goal difference from Liverpool, told reporters as a news conference on Friday.

“(Chelsea) are incredible professional players, they are proud and they will do extra (on Sunday).
“In the moment, I was so happy but today, I wish we hadn’t beaten them 6-0!”
City midfielder David Silva will be seeking an eighth major domestic title since joining the club in 2010 and says it is always beautiful to play at Wembley.

“It’s another chance to win a title,” Spaniard Silva, who scored in the 3-0 defeat of Arsenal in last season’s League Cup final, said. “It’ll be tough. They have a lot of quality players up front, so we should take care.”

Guardiola has injury concerns over Gabriel Jesus, John Stones and Fabian Delph, who all missed the victory over Schalke.
Both clubs will be looking for their sixth League Cup titles on Sunday — a total only bettered by Liverpool.

Some roads closed for Nicosia marathon