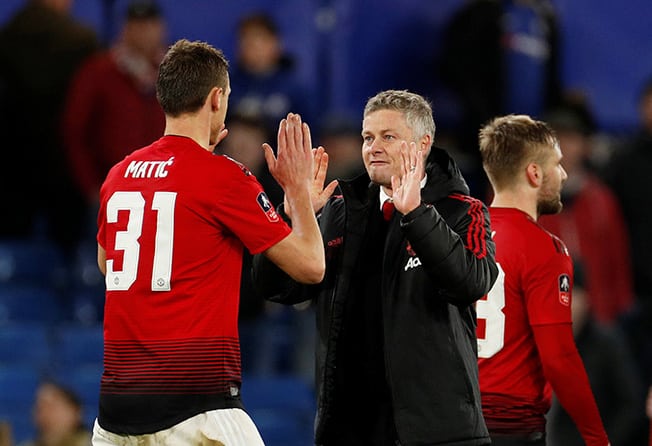 MANCHESTER United’s strong domestic form in recent weeks has ensured they are no longer ‘underdogs’ when they take on arch-rivals Liverpool in Sunday’s Premier League clash, caretaker manager Ole Gunnar Solskjaer has said.

Liverpool handed United a 3-1 defeat in their last meeting at Anfield in December which led to former manager Jose Mourinho’s dismissal and Solskjaer’s appointment.

Solskjaer has since turned United’s bleak season around with 11 wins in last 13 games in all competitions, losing just once to Paris St Germain in their Champions League last-16 tie.

“Suddenly we are not underdogs any more, suddenly people praise us, they think now is the time to play them,” Solskjaer told reporters.
“We have to perform better than we did against PSG. We have got to learn from that experience. It’s a big game, a big team.
“It’s not about emotions. I understand that emotion can be brought into it, but we have to stay focused and controlled, but with some fight in us as well.”

Solskjaer said the injured pair of Anthony Martial and Jesse Lingard would be assessed over the next two days before he takes a call on their participation, with the Norwegian hopeful Martial would make the squad.

“I hope Jesse will be OK, I hope and think Anthony will be OK,” Solskjaer added. “But we have two more days, they have to get through these two sessions. They have not been part of it yet but they have been doing some recovery work.
“Anthony’s was a different muscle so we think that he might be ready and hope that Jesse will.”

Meanwhile, Liverpool boss Juergen Klopp believes Solskjaer should be made Manchester United’s permanent manager and praised the Norwegian for being able to combine everything United stood for under Alex Ferguson with a modern tactical approach.

“It must be one of the best records ever, mustn’t it?” he said. “I’m really happy for him. It’s not the best news for us but for all Manchester United fans its brilliant.

“They’ve brought in all the things Sir Alex Ferguson stood for with all the new things in football. That makes them a threat again. They are really back on track. Good for them.

“Now he’s in charge and there’s no doubt he will be the manager next year as well. That is clear. Can you imagine if they brought in a new manager? He deserves (the job) 100 percent.”

Klopp said Solskjaer’s success was built on the Norwegian being able to get the best out of players such as Paul Pogba, Ander Herrera and others, who struggled under Mourinho earlier in the season.

“They have found a solution and it has worked out,” Klopp added. “We see that with Pogba and with Herrera in outstanding shape. They were all good before and now they are full of confidence and use their potential.

The next Brexit flashpoint: What happens in parliament on Feb. 26-27?