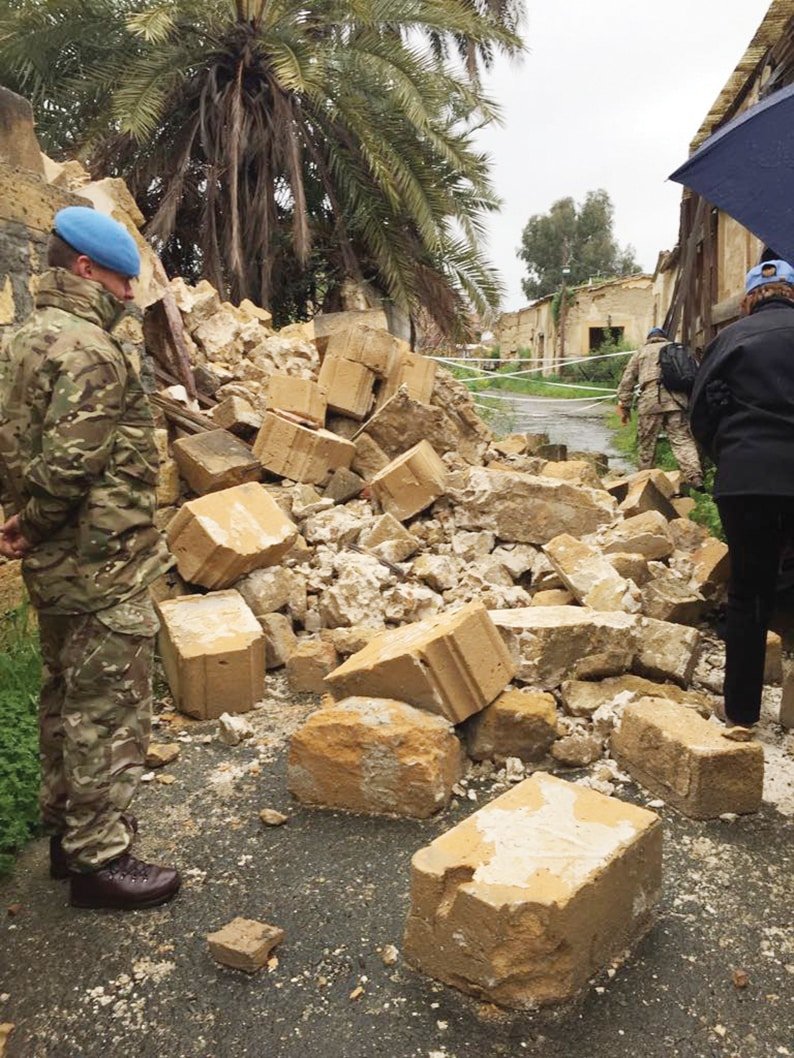 A UN soldier at the site Photo: Religious Track of the Cyprus Peace Process)

THE two Cypriot leaders on Monday were given a slap on the wrist by the president of Europa Nostra, maestro Plácido Domingo, who called on them to discuss during their meeting on Tuesday the alarming state of heritage and historic buildings in the buffer zone of Nicosia.

Previous calls to the two leaders went unheeded leading to the partial collapse of an important cultural heritage monument, he said.

Domingo, in an open letter to President Nicos Anastasiades and Turkish Cypriot leader, Mustafa Akinci, called on them to urgently act to protect the endangered heritage in the buffer zone of Nicosia.

“I write to you on behalf of Europe Nostra, the voice of cultural heritage in Europe, to appeal to you to seize the opportunity of your new meeting on 26 February 2019, to discuss the alarming state of heritage and historic buildings which are located in the buffer zone of the walled town of Nicosia,” Domingo’s letter said.

The recent partial collapse of the walls of the medieval church of St. James (Ayios Iacovos) “is a deplorable reminder that urgent measures must be undertaken to reinforce and restore the many endangered buildings located in the buffer zone in order to prevent further loss of Cyprus’ invaluable cultural heritage, both tangible and intangible”, it said.

Domingo reminded the two leaders that after visits to the buffer zone last October organised by Europa Nostra and a major public discussion on its endangered cultural heritage, the organisation had sent them a letter in November 2018, “to express our grave concern about the deplorable state of deterioration which continued and was indeed accelerating in the buffer zone of Nicosia.”

“We, among others, appealed to you to give the political impetus to the urgently needed reinforcement of two churches located in the Buffer Zone, namely St. George’s Church and St. James’ Church (Ayios Iacovos)”.

He said that in the previous letter, Europa Nostra had insisted that the condition of these two important historic monuments was particularly alarming and that it was necessary to start the rescue works without any further delay to avoid any irreparable loss.

“Alas, the partial collapse of the church of St. James is a sad demonstration that Europa Nostra was right to ring the alarm bell.”

Domingo called on the two leaders to seize the opportunity of their meeting to reach an agreement between the political and military authorities concerned, both local and international, to allow the Bicommunal Technical Committee on Cultural Heritage – acting in due consultation with the Religious Track of the Cyprus Peace Process – “to undertake immediately adequate measures to protect the remains of St. James’ Church from adverse weather influence while preparing the complex restoration works to bring the church back to its previous state.”

The committee should also be allowed to urgently undertake necessary reinforcement and restoration works to make sure that a similar destiny does not befall to the nearby 17th century Church of St. George or to a series of other historic buildings located in the Buffer Zone of Nicosia, it said.

“We remain hopeful that Europa Nostra’s voice will be heard and that you shall jointly take resolute action to ensure that immediate and effective conservation of the Buffer Zone of the Walled Town of Nicosia becomes a priority issue in your forthcoming negotiations,” he said.