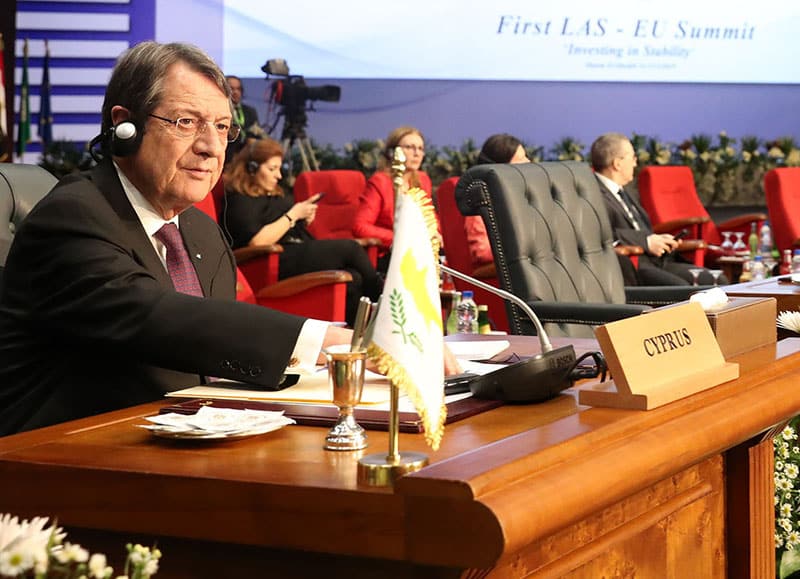 President Anastasiades at the summit

President Nicos Anastasiades said the ongoing meeting of the EU-Arab partnership is an important milestone, which highlights the acknowledgement that such strategic relations contribute to the efforts to to promote peace, security, stability and economic growth in the region.

Speaking at the first Plenary Session of the League of Arab States – European Union Summit in Sharm el Sheikh, Egypt on Sunday, President Anastasiades said transnational challenges such as terrorism, regional conflicts and humanitarian crises, migration, proliferation of weapons of mass destruction and climate change are a global source of instability and regrettably, instability and conflict are the predominant characteristics of our wider region.

This Summit, and the Declaration to be adopted, is a Statement of the relevance and necessity for an ever stronger partnership and our commitment to this end, he added.

Anastasiades said In Syria, the war is far from being over. ISIS and other terrorist groups may have been weakened, but certainly not eliminated and the war continues to have a deep impact on neighbouring countries which have had to shoulder a disproportionate burden. “They need our continued support,” he said.

Anastasiades also referred to the humanitarian refugee crises and migration flows that are a constant source of instability, creating rapid demographic changes and heavy economic and social pressures. “We need to collectively tackle the root causes in order to address the issues effectively,” he said.

Turning to terrorism, Anastasiades said it has affected the lives of all as radical extremism has brought asymmetrical threats to Europe and in the Arab world and remarked that Egypt continues to suffer and is in a constant battle to combat this scourge noting that collective and coordinated action is indispensable.

Anastasiades further said that “we cannot talk of prosperity and stability in the region while the Palestinian issue remains unresolved” and the objective should be the establishment of a sovereign, viable and contiguous Palestinian state on the territories occupied since June 1967 with East Jerusalem as its capital, living side-by-side in peace and security with all its neighbours.

He further noted that the only way to effectively address common challenges and threats is to act together adding that the basic principles underlining such a collective response are: adherence to international law, respect and promotion of human rights, respect for sovereignty, territorial integrity and independence of states and good neighbourly relations. Our efforts must be underpinned by trust, solidarity and shared responsibility, he said.

Cyprus, he said, strongly believes in such efforts and has been active in establishing synergies in its immediate and wider neighbourhood, including through the creation of cooperation fora with partners present here today, Greece, Egypt, Jordan, Lebanon and Palestine.

“Our vision is a more stable and prosperous region and to this end we engage with a positive agenda in many issues of mutual interest, including security, energy, climate change,” the President said, adding that it is well known that countries located in the Eastern Mediterranean and Middle East, which is classified as one of the global “hotspots”, are considered as highly vulnerable to climate change.

He introduced to delegates a regional initiative to undertake an international initiative and coordinate the efforts of Eastern Mediterranean and Middle East region to ameliorate climate change and its impacts.

“We are ready to take this vision forward, with the development of a regional Action Plan, which will be subsequently adopted in an International Conference, for recording and mitigating climate change, in sectors such as the environment, agriculture, tourism and health,” he added.