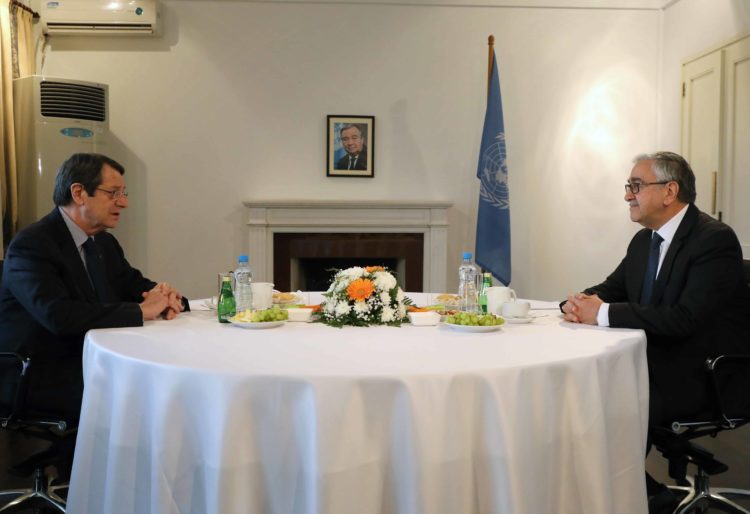 President Nicos Anastasiades and Turkish Cypriot leader Mustafa Akinci agreed on Tuesday to link the two sides’ mobile telephony networks, a confidence-building measure (CBM) decided in 2015 but never implemented, as well as a number of other moves including the exchange of cultural works and mine clearance.

Other subjects discussed included Anastasiades’ ideas on decentralisation, a UN statement issued after a meeting that lasted about three hours said.

“The two leaders decided to implement the confidence-building measure regarding mobile phone interoperability through separate agreements of the operators on both sides with a hub based in Europe, in order to facilitate greater interaction between the two communities,” the UN statement said.

It also said that Akinci had announced his side’s decision to hand over a host of religious icons and other artefacts stored in Kyrenia castle in the aftermath of the 1974 Turkish invasion.

Co-president of the Technical Committee on Culture Androulla Vasiliou said later on Tuesday that “around 200 artworks that were collected by Turkish Cypriots will be returned to their rightful owners.”

The Greek Cypriot side will hand over visual and audio recordings of Turkish Cypriot artists stored by the state broadcaster CyBC.

The UN said the two leaders had a constructive exchange of views in a cordial atmosphere with Anastasiades presenting “his ideas on decentralisation and the two leaders discussed in depth the basic principles.”

Regarding confidence-building measures, the leaders committed to intensifying the work of the Technical Committees with the objective of improving the daily lives of all Cypriots.

They announced that the interconnectivity of the two electricity grids, as agreed in 2015, has now been achieved.
“In this regard, they decided to make the temporary electricity supply arrangement permanent and without restriction. They acknowledged that the transfer of electricity will continue on an as-needed basis.”

Citing a Greek Cypriot source, CNA reported that in addition to the extended list of CBMs that was submitted, Anastasiades also referred to issues which damage confidence, such as the Turkish violations in the Cypriot Exclusive Economic Zone and the recent provocations in Denia and Strovilia.

Speaking after the meeting, Anastasiades said he had agreed with Akinci to do their best to draft the terms of reference that would allow the two sides to return to a “creative and effective dialogue.”

Anastasiades said it was a friendly meeting without that meaning, however, that the two men agreed on everything.

“I have expounded my ideas as regards the decentralisation of powers so that the Turkish Cypriot positive vote can be exercised wherever and whenever Turkish Cypriot rights are affected, but not on everything,” Anastasiades said.

According to Anastasiades, the Turkish Cypriot leader insisted that even with decentralised powers, his community should maintain the right of a positive vote on every decision.

“We have agreed on further discussion of the issue, not the acceptance of the positive vote, but details concerning decentralisation,” Anastasiades said.

He said he was neither optimistic nor pessimistic over the terms of reference that would enable resumption of reunification talks, which collapsed in the summer of 2017.

“The phase we are going through is very difficult. I must say that what we have agreed is to do everything in our power to draft the terms of reference that will enable a creative and effective dialogue,” Anastasiades said.

The president said the two men had discussed a range of CBMs and did not rule out a new informal meeting to study them further.

He expressed the hope that Akinci would study what he had conveyed to him and realise that there cannot be a creative dialogue “if he insists that the Turkish Cypriot community must have the decisive role in the decision-making.”

In his statements following the meeting, Akinci relayed to the media the “good news” regarding CBMs.
Regarding the decision to enforce the permanent interconnectivity of the electricity grids of both sides, Akinci said that this will have significant benefits for both communities.

“The system will grow and decongest,” Akinci said, noting that in the possibility of “a power failure on one side, the other can respond.”

There will be no temporary financial agreements, since the interconnection will be permanent, and therefore “if one side takes from the other electricity amounting to 20 kilowatts, for example, it will then return an equal amount.”

In the case of a long-term damage to the system of one side, leading to its prolonged dependence on power from the other side, then a trade agreement will be sought.

Though he could not provide a precise timeframe for the linking of telephony networks, Akinci said that very soon a Greek Cypriot going from Paphos to Kerynia or a Turkish Cypriot travelling to Limassol would not lose contact with their home.

The matter is now technical, and will be taken on by the relevant Technical Committee, he said.

The two leaders also came to an agreement for the clearance of mines in nine areas of each side, a task which will be taken on by the military, with the final aim being an island completely free of mines, Akinci said.

Anastasiades said he would continue working on these details, which will be evaluated in the future, Akinci added.

“To avoid misunderstandings,” Akinci said, “it must be clarified that no matter how the authority of the central administration shrinks, some responsibilities will remain and how these will be carried out continues to be an important matter,” noting that political equality at this level is crucial.

Information campaign to explain all about Gesy