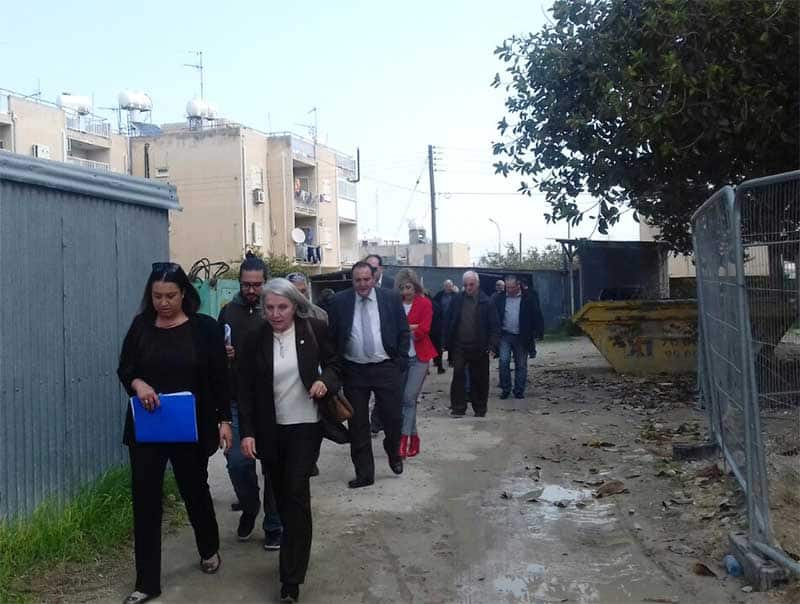 Residents of the Zenon refugee estate in Larnaca on Tuesday called on President Nicos Anastasiades to intervene for urgent repairs to the buildings they live in, which they likened to third-world living conditions.

Residents, among them families with small children, said their homes have severe mould problems while water runs through the walls when it rains.

They made the plea to Anastasiades during a visit by the House refugee committee, that also visited the refugee estate of Ayios Ioannis and Ayioi Anargiroi in Larnaca.

Representative of the Zenon estate residents Paraskevi Ptohopoulou said that despite studies being carried out last year no one has informed them of the results or what is going on.

“People here are living in terrible, third-world conditions. There is dampness and mould in the rooms, there are cracks in the walls and when it rains conditions are awful. We have no help from anyone,” Ptohopoulou said.

Residents are low-income and cannot maintain these 41-year-old apartment buildings, she said.

“We simply want our president to intervene, help the people living here.”

Head of the House refugee committee Skevi Koukouma said that they have visited several refugee estates over time and the conditions in them are wretched.

The conditions of these buildings are beyond maintenance, she said.

A programme ought to be introduced for the restructuring of refugee housing estates to improve the quality of life of their residents, while temporary maintenance ought to begin, she added.

She called for more funding for the competent state services so more staff can be hired to at least fix leaking rooves to address the mould problem.

Koukouma said that installation of lifts in these buildings is moving at a snail’s pace. Only 109 apartment buildings of the 380 have lifts, she said.

“People have now aged and cannot enjoy a quality life when they have to go up and down many stairs to go to their home,” she said. An elderly man who was living in one of those buildings in Larnaca, she said, died because there was no lift to get him down to the entrance to be transferred by ambulance to hospital.

It is imperative, she said, for a restructuring scheme for these estates that are now over 40 years old.

“There is no other way to offer quality of life to the people living in these estates,” she said.

Senior official of the town planning department Irini Yiannakou said that the studies that have been carried out on the structural adequacy of the buildings showed that there are no problems. She added that as regards expressed concerns over the collapse of the Zenon buildings, based on the study findings, they were not justified. She acknowledged however that building maintenance was in order.

The actions of the town planning department, she said, are focused on upgrading the quality of life of refugee estate residents.

Yiannakou said that the service has signed contracts with construction contractors to deal with all exiting problems.

She added that the interior ministry was working on ways to speed up the installation of lifts in all buildings.

Publishing only when she has something to say