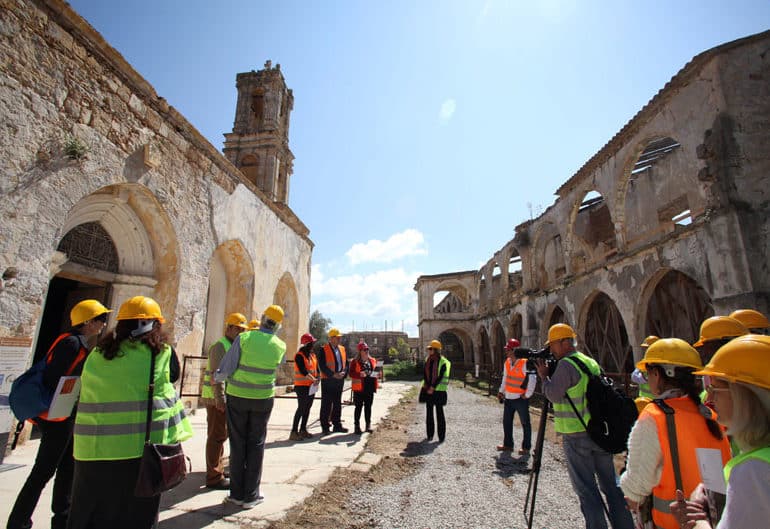 The Ayios Panteleimonas monastery in Myrtou

Achievements in the restoration of monuments belonging to all communities of Cyprus by the Technical Committee on Cultural Heritage were presented before the European Parliament in Brussels on Tuesday for the first time.

The committee presented its successful restoration of 31 heritage sites across the island, including Orthodox, Maronite and Armenian churches, mosques and minarets, fortifications, hammams, aqueducts and watermills.

Glafkos Constantinides, a Greek Cypriot member of the committee, told the EP that a brochure detailing the achievements handed out reflected the hard and meaningful work of the committee over the past 10 years. “It is both a birth certificate and a passport, signifying the committee’s birth, its first steps, growth, and maturity,” he said.

Cultural heritage can act as an instrument for collaboration, Constantinides said, and as a vehicle for shared thinking with a focus on joint actions.

“The journey from 2008 to 2018 has shown in the clearest possible way how cultural heritage conservation, with all its complexities and challenges, can be a paradigm for the future that Cyprus is in great need of,” he added.

Constantinides said the work of the committee is not finished. “We have a lot to do and a lot to face up to, many priorities to pursue both in the field and in society.”

He said the Technical Committee began its journey 10 years ago and “learnt to work together by creating an environment of mutual trust and cooperation following a long and cumbersome process.”

Members travelled from Paphos to Karpas and visited hundreds of monuments all around the island, before projects were prepared with technical support from the UNDP and financial contribution from the European Union, allowing the successful completion of important work, he added.

Noting that Cyprus is an island at the crossroads of three continents at the “furthermost West of east” and “furthermost East of West”, Tuncay said, “as the members of the technical committee, we acknowledge the responsibility of preserving and sustaining this richness and handing it over to future generations.”

Concluding, he stressed that the sustainable protection and maintenance of the monuments on this island can be found only with the comprehensive solution of the Cyprus problem.

Head of office of the UNDP in Cyprus Tiziana Zennaro said the work of the technical committee is already serving as an example in many other similar contexts, including Kosovo, Moldova, Iraq and Jerusalem.

In 2019, she added, the UNDP is planning to co-organise along with the technical committee “a regional conference on confidence building through cultural heritage.”

In his remarks, head of unit for Cyprus Settlement Support of the European Commission Kjartan Bjornsson said that the work of the committee is a “clear example of how Cypriots can work together for peace”.

He also said the European Union has been funding the work of the technical committee on cultural heritage since 2012 with almost €15 million provided so far while another €2.5 million will be provided later this year.