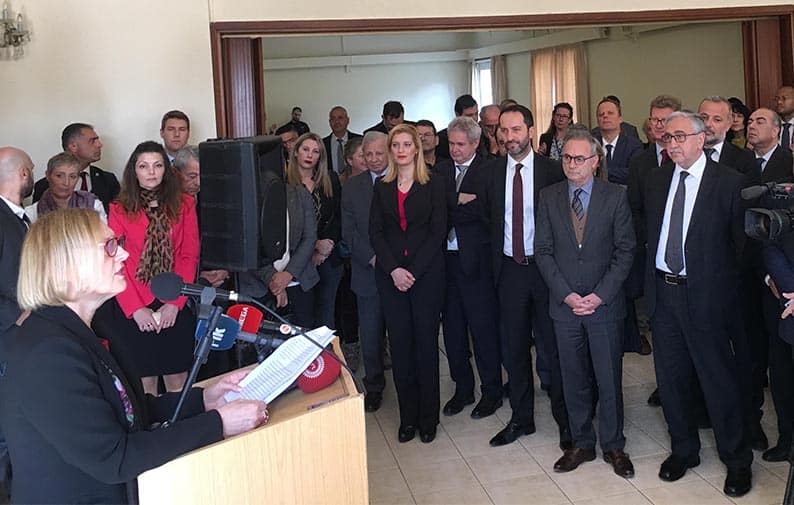 The National Council will meet on Friday when President Nicos Anastasiades will brief party leaders on his latest meeting with Turkish Cypriot leader Mustafa Akinci, but despite the two leaders’ agreeing to confidence-building measures (CBMs), the focus remains the resumption of talks, the Greek Cypriot side said on Wednesday.

Government spokesman Prodromos Prodromou told reporters that the position of the Greek Cypriot side was to agree to the terms of reference for new talks as soon as possible.

The leaders agreed on Tuesday at their informal meeting to link the two sides’ mobile telephony networks through an outside hub – a CBM decided in 2015 but never implemented – integration of the electricity grid, which was completed almost two years ago, an exchange of cultural material, and additional mine clearance. Anastasiades also raised his proposal for a more decentralised federal government.

Prodromou said it was also positive that some CBMs were announced “particularly measures relating to broader society and people’s daily lives, such as the telephone interface and the permanence of the interconnection of the electricity network”.

“Of course, these CBMs in no way replace the main issue which is currently the resumption of negotiations,” he added.

Following Prodromou’s announcement, the UN Special Representative Elisabeth Spehar said that both sides need to continue engaging with the UN envoy Jane Holl Lute to determine the future of the talks.

Commenting on CBMs at a bicommunal reception held at Ledra palace, she said: “CBMs are no substitute for negotiations, but after years of estrangement between the communities, they can help to build the foundation for greater public investment in the process and for both a successful and a sustainable outcome.”

Regarding Lute’s latest meeting in Cyprus, Spehar said the UN envoy conducted her third visit to Cyprus between February 2-4, meeting with the two leaders and has also continued to engaged with the guarantor powers, with the aim of supporting the parties to agree on the terms of reference for meaningful, results-oriented negotiations.

“The importance of this exercise should not be underestimated and the parties should continue to engage with Ms Lute in a constructive, creative and diligent manner, recognising that the outcome will be critical in determining the future of the Cyprus talks,” Spehar said.

Addressing political party representatives, Spehar said that they may have different opinions on how to move forward, she expressed however certainty that they do have “the means to work towards a better, united Cyprus.”

She said moreover that the recent Security Council resolution on Cyprus outlined several areas, such as CBMs, including some of the ones agreed by the leaders on Tuesday. Other measures, such as peace education and bringing children together from across the divide, deserve encouragement, she said.

Greater involvement of civil society, particularly women and youth is proven to greatly improve the chances of success and sustainability of political processes, she said.

Regarding Tuesday’s informal meeting between the two leaders that she hosted , Spehar said “The meeting took place in a frank and open manner and with a cordial spirit.”

According to Spehar, in addition to further clarifying each other’s positions on key matters and identifying outstanding issues to be resolved, the leaders also agreed to implement several important CBMs for the benefit of the two communities.

“This is encouraging but of course there is still a significant road to travel to return to the negotiating table,” she added.

Prodromou said he wanted to make it clear that the Greek Cypriot side opposed the prevailing view that new talks would not happen before June but the “objective data is such that it appears this is the timeframe that will be followed”.

Responding to questions that political parties had accused Anastasiades of telling Akinci more about his decentralisation proposal than he had told the National Council, Prodromou said that was not true and that the parties had previously been asked for input on the issue.

Akinci did allude to a lack of information on what the president means by a more decentralised federation after Tuesday’s meeting.

Anastasiades had talked about which of the competencies should remain with the central government but refrained from going into details over which ones could be transferred to the constituent states, the Turkish Cypriot leader said.

He said that both sides had maintained their positions on the issues of political equality and effective participation in decision making.

“I wish to underline the fact that no matter how limited the competencies of the central government, there will be no doubt some and those powers will be exercised jointly. And this brings political equality and effective participation with it,” Akinci said.

The UN Security Council members welcomed the meeting of the two leaders on February 26 and the progress made on confidence-building measures, in a statement on Wednesday.