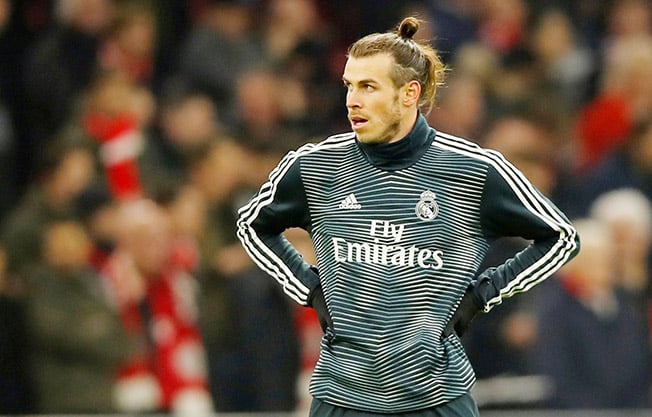 Real Madrid coach Santiago Solari insists Gareth Bale and the rest of the squad are “all together” as they prepare to tackle El Clasico rivals Barcelona in the second leg of their Copa del Rey semi-final.

Wales forward Bale found himself in the spotlight after appearing to shrug off his team-mates’ celebrations after scoring a late penalty in the 2-1 LaLiga win at Levante on Sunday.

Solari, though, moved to dampen any suggestions of dressing-room disharmony as Los Blancos prepared for the visit of Barcelona with the tie delicately poised at 1-1 following the first leg at the Nou Camp.

“We are all standing united in the hope of winning as a team tomorrow,” the Real Madrid coach said at a press conference.

“There are many places where you can focus your attention. We are looking towards the match.

“We have already spoken about Gareth (after Levante), our focus now is on tomorrow’s game and we hope to live up to the demands of the tie.

“We have gone through a lot of knockout ties to make it this far. The first game was a great one for the fans, in terms of Gareth and the others, they are focused on the game too.”

Real bounced back from a shock home defeat by Girona with victory at Levante.

Captain Sergio Ramos served a one-match suspension last weekend, so should return to lead the side.

Solari wants to continue momentum into what will be the first of successive Clasico showdowns at the Santiago Bernabeu.

“We need continuity because we have been doing well. The team knows that they are doing well, they know where we need to be,” Solari said at a press conference reported by the club.

“We are enjoying the competition. We put our heart and soul into this. We battle hard to win every game. We want to enjoy it.”

Barcelona head coach Ernesto Valverde is set for his 100th game in charge on Wednesday night.

Valverde is ready to meet the challenge head on once again.

“We have to try to win the game, especially considering that if we don’t score, we won’t qualify,” Valverde said at a press conference.

“We have the obligation to score, there will be no variation on what we usually do.

“El Clasico at the Bernabeu is always complicated, but the semi-finals are wide open, nothing has been decided.

“We know the importance of the opponent and we hope we can qualify.”

Midfielder Arthur is back in training after a hamstring problem, and Valverde confirmed the Brazilian could be drafted into the squad if deemed fit.

“He is a player who is different to the others, a great player, who offers us many things,” Valverde said.

“(But) we have others to replace him and we don’t make excuses.”