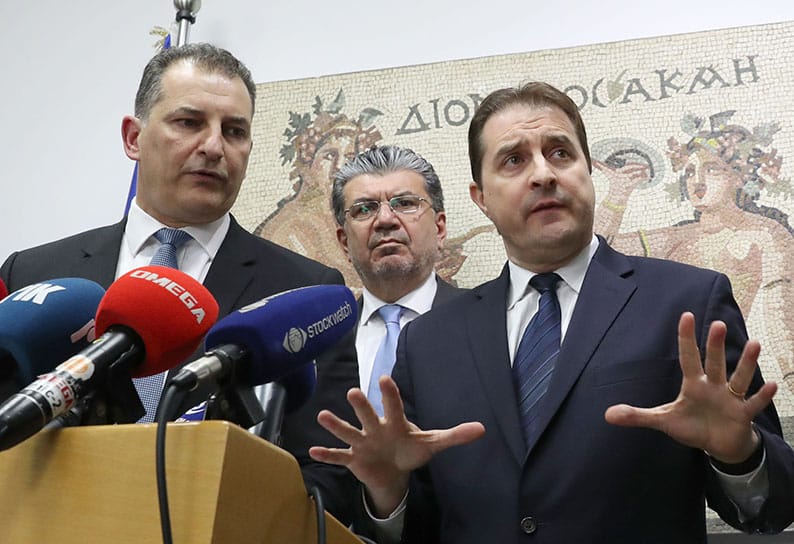 Energy Minister Giorgos Lakkotrypos and ExxonMobil’s vice-president for the region, Tristan Aspray announcing the find at a press conference on Thursday

Cyprus and ExxonMobil on Thursday announced a natural gas find estimated at between 5-8 trillion cubic feet (tcf) in an offshore field inside the island’s exclusive economic zone.

The discovery was made in the Glafcos-1 well in Block 10 of the EEZ.

“Based on preliminary interpretation of the well data, the discovery could represent an in-place natural gas resource of approximately 5 trillion to 8 trillion cubic feet (142 billion to 227 billion cubic metres). Further analysis in the coming months will be required to better determine the resource potential,” the company said in a statement.

“These are encouraging results in a frontier exploration area,” said Steve Greenlee, president of ExxonMobil Exploration Company. “The potential for this newly discovered resource to serve as an energy source for regional and global markets will be evaluated further.”

Glafcos was the second of a two-well drilling programme in Block 10. The first well, Delphine-1, did not encounter commercial quantities of hydrocarbons, the company said.

It is the second big find following Noble Energy’s discovery of 4.5 tcf in 2011 in the Aphrodite field in Block 12.

Speaking at a press conference in Nicosia, energy minister Giorgos Lakkotrypis said Glafcos is the largest discovery so far in the EEZ and according to official data one of the greatest discoveries in the world in the past two years.

“The results,” he added, “demonstrate the potential of our EEZ because it is a high-quality reservoir.”

ExxonMobil’s vice-president for Europe, Russia, Asia, the Pacific and the Middle East, Tristan Aspray said he was very encouraged by the discovery and added that in the coming months, there would be an appraisal drilling, in order to determine the full potential of the field.

Exxon is operator in Block 10 and holds a 60 per cent interest in the licensed acreage, with Qatar Petroleum International Upstream holding the rest.

Aspray sounded upbeat on the block’s prospects, noting that one commercial discovery in two attempts is highly encouraging, considering the average success rate worldwide is one in four.

Responding to questions, the Exxon executive hinted the company was eyeing further explorations offshore Cyprus, adding that these would likely take place next year.

Exxon is interested in “other opportunities” in Cyprus as well as the broader eastern Mediterranean, he added.

The US energy giant has publicly stated its interest in building a liquefied natural gas (LNG) plant on the island should enough quantities be discovered. Gas from reservoirs is piped onshore to an LNG facility where the gas is liquefied so that it can be re-exported via tanker.

Asked if the Glafcos find puts the LNG option in play, Aspray said it was too early to tell as additional quantities would need to be discovered.

The capacity of an LNG plant typically ranges from 10 to 15 tcf; the Glafcos reservoir falls well short of that.

Aspray said his company was fully aware of political tensions in the region when they were bidding for Block 10.

He noted that Block 10 does not in any case lie within a “disputed” area in the eastern Mediterranean. Regardless, Exxon would fulfil its programme in Cyprus and meet all its contractual obligations.

The true size of the Glafcos reservoir remains to be determined. The 5-8 tcf range cited by Exxon signifies there’s a 75 per cent probability for the gas to be on the lower end, 25 per cent on the higher end.

Moreover, the 5-8 tcf cited does not specify whether these are recoverable quantities.

But it would still make it the largest find to date in Cyprus’ EEZ. The Aphrodite field holds 4 to 4.5 tcf, while Calypso in Block 6 is believed to hold 3 to 4 tcf, according to industry chatter.

By comparison, Zohr, a supergiant gas field discovered by ENI in 2015 in adjacent Egyptian waters, holds an estimated 30 tcf of resources in place.

Being on the same order of magnitude in terms of size, Glafcos and Calypso face similar challenges in terms of their development as standalone projects.

According to Ellinas, ENI may decide to link up Calypso to Zohr itself. Due to their proximity, the two fields need only be connected by pipeline, with the aggregated gas pumped ashore to Egypt’s Damietta LNG plant, in which ENI has a stake.

Depending on what the future has in store in Cyprus’ EEZ, one can’t rule out the possibility of Exxon’s smaller Delphine-1 reservoir likewise being linked up to Zohr.

“Exxon always go for big. So my best guess is that they’ll ‘sit’ on Glafcos until more gas is discovered. They’re not in a rush, and besides they’ve got other projects going on elsewhere,” Ellinas said.

On the value of the Glafcos find, using today’s LNG prices ($6 per mmbtu) and assuming a conservative 5 tcf of gas, the expert said it would be worth close to €30bn.

But, he stressed, that was a theoretical estimate.

Under the same hypothetical scenario, the profits from developing Glafcos with an LNG plant would come to some $5bn, as infrastructure costs would have to be deducted from the $30bn.

The LNG plant alone would cost around $15bn; on top of that, there is the cost of liquefying the gas as well as shipping.

Shipping the gas off to Asia markets alone would shave off $1 per mmbtu.

“The news today is certainly positive and there is good cause for optimism,” summed up Ellinas.

“But we must be patient. It will take the better part of 10 years from now for an LNG facility to go operational. Don’t expect the money to flow in tomorrow.”