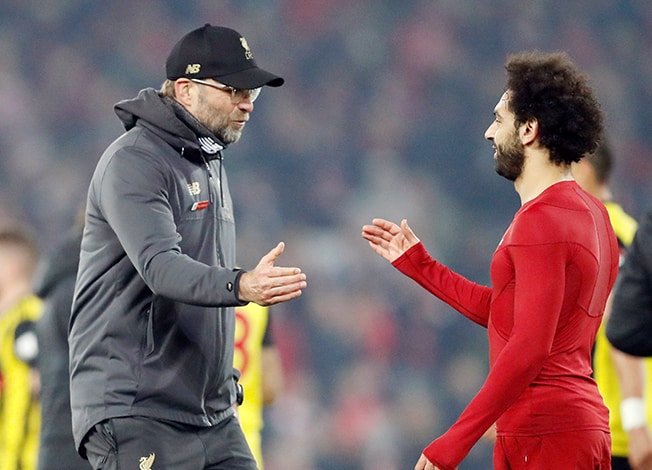 Jurgen Klopp's Liverpool got back to winning ways after back-to-back draws by thumping Watford 5-0 at Anfield to remain one point ahead of City, who edged out West Ham 1-0 at the Etihad

Jurgen Klopp insists he is unfazed by Manchester City keeping pace with Liverpool in the Premier League title race after contrasting victories for the rival teams.

Liverpool got back to winning ways after back-to-back draws by thumping Watford 5-0 at Anfield to remain one point ahead of City, who edged out West Ham 1-0 at the Etihad Stadium.

Klopp, though, admitted one of the perils of challenging for the title is that their adversaries tend not to drop points too often.

The German said: “The only thing we can do is play football and win games and we will see what happens. But it’s not that I get in the dressing room and somebody tells me the result and I get a heart attack. It’s a normal thing.

“If you’re top of the table it’s pretty likely that the contenders all win, that’s how it is.

“That’s the only advantage you have when you fight for staying in the league because the other teams lose a bit more often than our fight.

“I didn’t think about that, to be honest, but it’s what I expected.”

In the absence of the injured Roberto Firmino, Sadio Mane was deployed in the centre forward position, with Divock Origi and Mohamed Salah either side of the Senegalese in a front three.

Any concerns that decision caused were quickly extinguished as Mane scored twice in the opening 20 minutes, heading into the top corner from a Trent Alexander-Arnold cross before cheekily backheeling into the net over a flummoxed Ben Foster.

After the interval, Origi marked only his second league start of the season with a goal before Virgil Van Dijk scored twice to cap a sensational team performance that left Klopp purring.

The German added: “In a new position, how (Mane) played in that position, that was exceptional. It was clear he would help us in the build-up as he is that type of footballer but we needed him in the box as well.

“How Mo played was unbelievable, he was pretty much unplayable in a game he didn’t score.

“Divock defending is not natural for him on the wing but he did it. Offensively he was constantly a threat, he was involved and scored a fantastic goal.

“It was just an all-round top performance. I’m really happy.

“We wanted to play like this every day. That is maybe sometimes possible, sometimes a bit less but you have to be stable and the boys were always stable and really fluent offensively.

“It is good. It is a good example of how football should look. Let’s try to do it again and again.”

Defeat for Watford ended a three-game winning run in all competitions, which saw them rise to seventh in the standings and reach the FA Cup quarter-finals.

Javi Gracia, therefore, acknowledged the Hornets had been beaten by the better side but he retains faith in his players.

He said: “Before the game, we knew it would a very demanding game.

“After we conceded one early goal, then it was very difficult for us to compete. We tried, in some moments we created some chances but they dominated the game, they created more chances.

“They played really well and they deserve the victory that they got.

“The only thing I can say about my players is that I have big confidence in them. We are keeping a good level in all our performances. We knew (Liverpool) would be tough but we will look to the next game.”

Plant of the week: Component of pepper spray used to reduce pain