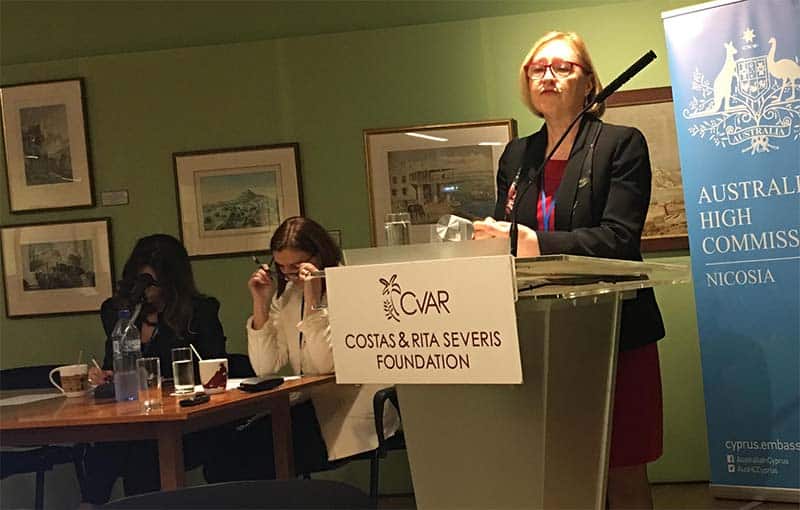 The UNSG’s Special Representative in Cyprus Elizabeth Spehar stressed on Wednesday night the importance of women getting engaged into the process for a Cyprus settlement, noting that “often women shine the most when things look the most dire.”

Spehar was speaking at ‘Women in Peace and Security. The Leadership Trio of Unficyp – a Global First’ in Nicosia, organised by the embassies of Australia, Norway and Canada. The UN peacekeeping force in Cyprus (Unficyp) is the first mission in the 71-year history of UN peacekeeping to have a woman as the Head of Mission, as well as female leadership in both uniformed components.

Spehar, who comes from Canada, serves as the Head of Mission, while the police component is led by Senior Police Adviser Ann-Kristin Kvilekval who comes from Norway, and the military component by Force Commander, Major General Cheryl Pearce, from Australia.

Referring to the role that women can play with regard to the Cyprus peace process, Spehar said in her speech that the UN mission to Cyprus is really investing in this. I am still not satisfied with the results I am seeing but we are not giving up, she added.

She noted that there are several challenges. “First of all we don’t have negotiations right now. That has led to a lot of disappointment and disenchantment not only by women but men as well. It means that a lot of people have, kind of, dropped out of the race, civil society actors that are just losing their steam,” she noted.

We have to get more people involved, she said, adding that “there is an incredible group of dynamic Cypriot women from both sides of the divide who haven’t given up and who could really make things change.

“With all due respect to certain individuals, there is a certain dearth of leadership on the Cyprus issue right now. I think that women can fill that vacuum and we have been trying to push the concept of women as the vanguard of the peace process. I think it is doable,” Spehar stressed.

She said that there needs to be a broader process, more inclusion, generationally, geographically and also listening to people who might have different points of view and try to understand their concerns.

She said that the untapped potential of women in peace processes and of women in our societies as a whole is one of the key issues of our time, “and I really would like to keep working to basically unleash that potential here on the island.”

Spehar said there are 7,682 female peacekeepers, both uniformed and civilian, out of close to 103,000, which amounts to 13 per cent.

Between 1957 and 1989, only 20 uniformed women served in UN peacekeeping missions worldwide. In 1993, one per cent of all uniformed peacekeeping personnel were female. In 2014, the number had only risen to three per cent.

Arrest for hunting in banned area