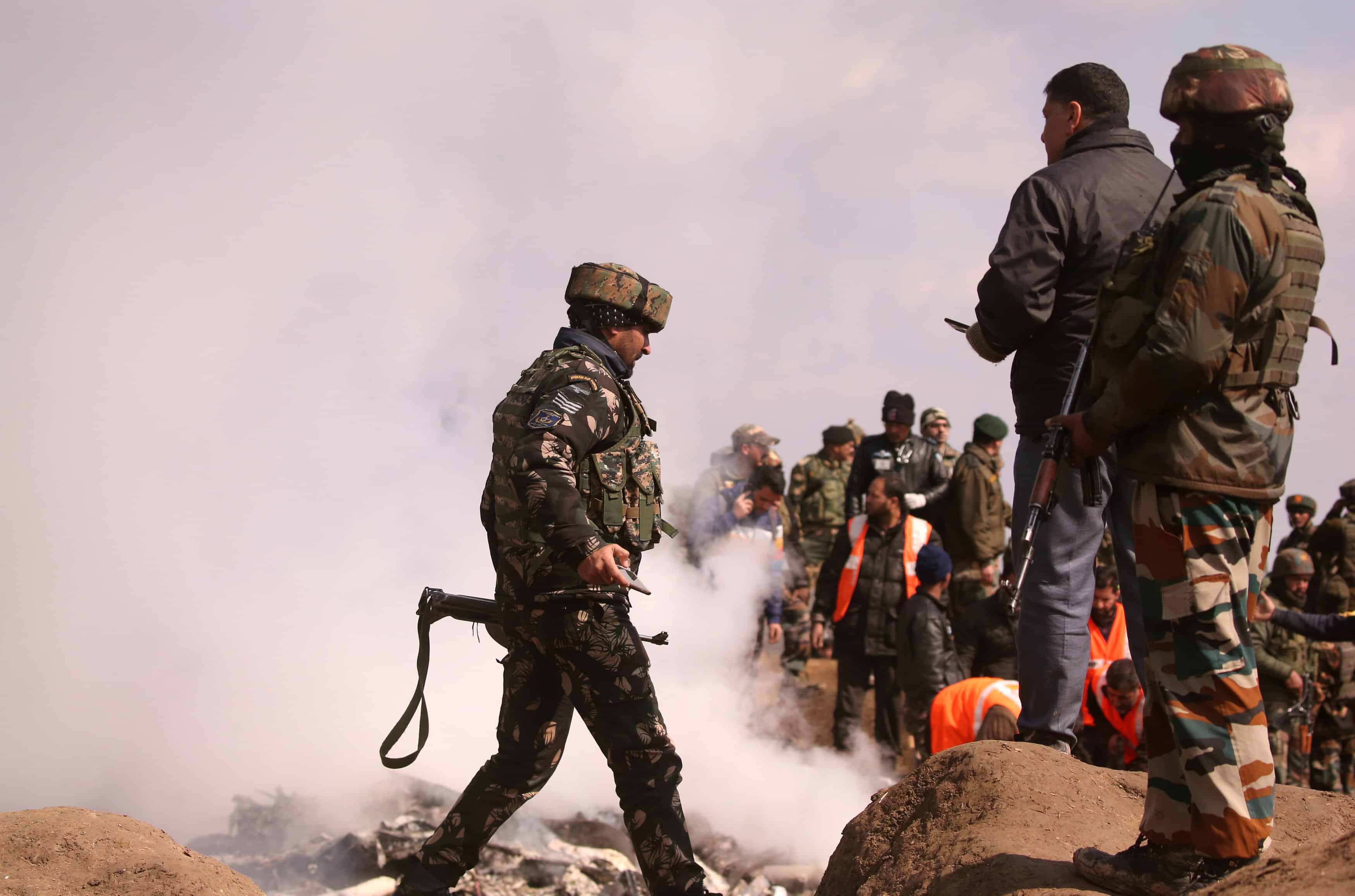 Indian soldiers stand as smoke billows from the wreckage of Indian Air Force's helicopter after it crashed in Budgam district in Kashmir February 27, 2019. REUTERS/Danish Ismail

By Alasdair Pal and James Mackenzie

Pakistan will return a captured pilot “as a peace gesture” to India, Pakistan’s Prime Minister Imran Khan said on Thursday, amid efforts by the United States to defuse a crisis between the two nuclear powers a day after both downed enemy jets.

The pilot, identified by Islamabad as Wing Commander Abhi Nandan, became the human face of the latest flare-up following the release of videos showing him being captured and later held in custody.

Khan said the pilot would be released on Friday, even as his military reported that four Pakistani civilians had been killed by Indian firing across the disputed border in Kashmir.

“As a peace gesture we will be releasing him tomorrow,” Khan told parliament.

Khan’s decision came after several other countries offered diplomatic assistance to de-escalate the confrontation between two countries that have almost went to war in 2002 for fourth time since their independence from British colonial rule in 1947.

Pakistan’s Foreign Minister Shah Mahmood Qureshi said his counterpart from Saudi Arabia was expected to visit Pakistan with a special message from Crown Prince Mohammed Bin Salman, who visited both Pakistan and India earlier this month.

Khan has already called for talks with India to prevent the risk of a “miscalculation” between their nuclear-armed militaries.

Earlier, US President Trump said he expected “reasonably decent news” regarding the conflict between India and Pakistan, adding that the United States was trying to mediate.

“They have been going at it and we have been involved in trying to have them stop,” Trump said in Hanoi, where he was attending a summit with North Korea’s leader.

“We have been in the middle trying to help them both out.”

The US, China, European Union and other world powers have urged restraint from the two nations as tensions escalate following tit-for-tat airstrikes in the wake of a suicide car bombing that killed at least 40 Indian paramilitary police in Indian-controlled Kashmir on Feb. 14.

Both countries downed enemy jets on Wednesday, and each accused the other of breaching cease fire agreements on Thursday.

Indian and Pakistani troops traded fire along the contested border in Kashmir on at least three occasions on Thursday, with the firing instigated by Pakistan every time, according to New Delhi.

Pakistan’s military said four civilians had been killed and two wounded in what it called a “deliberate” attack by India during the past 48 hours.

Earlier on Thursday, India’s Prime Minister Narendra Modi, who faces a general election in a matter of months, told a rally of supporters that India would unite against its enemies.

“The world is observing our collective will. It is necessary that we shouldn’t do anything that allows our enemy to raise a finger at us,” he said, in his first remarks since the downing of planes on Wednesday.

As a precaution amid the increased military activity, Pakistan has shut its airspace, forcing commercial airlines to reroute. Thai Airways International announced on Thursday that it had cancelled flights to Pakistan and Europe, which left thousands of passengers stranded in Bangkok.

Troops from India and Pakistan first exchanged fire on Thursday in the Poonch district for over and hour at 6 am, according to a statement from the Indian army.

Aijaz Ahmad, a resident in the Indian-controlled portion of the district, said he was still hearing heavy firing on Thursday afternoon.

“Loud sounds of mortar shells are being heard from a distance. Shops… are open but there is a lot of tension,” he said.

“The firing continued in intervals throughout the night. It was moderate,” said Shaukat Yusufzai, an administration official in the Pakistan-controlled part of Poonch.

India is building more than 14,000 bunkers for families in Jammu and Kashmir state living close to the border, hoping to keep them safe near their homes rather than evacuate them.

On Wednesday evening India’s foreign ministry handed a dossier to Pakistan that it claimed detailed camps of the Paskistan-based militant group that carried out the Feb 14 attack.

With a general election due in India by May, an upsurge in nationalism from any conflict with Pakistan could become a key factor, potentially favouring Modi’s Hindu nationalist Bharatiya Janata Party (BJP).

“This has brought a pro-Modi wave all through the country,” BS Yeddyurappa, a BJP leader in the southern state of Karnataka, told reporters. “The effect of this will be seen in the elections.”

The latest escalation marks a sudden deterioration in relations between the two countries. As recently as November, Pakistan’s leader Khan spoke of “mending ties” with India.

The White House urged “both sides to take immediate steps to de-escalate the situation.”

US Secretary of State Mike Pompeo said in a statement he had spoken separately with the Indian and Pakistani foreign ministers and had urged them to “prioritise direct communication and avoid further military activity”.

Pakistan’s envoy to the United States, Asad Majeed Khan, said Islamabad would like to see the Trump administration play a more active role in easing the crisis.

At the same time, he said the lack of US condemnation of India’s strike on Pakistan was “construed and understood as an endorsement of the Indian position, and that is what emboldened them even more”.

The United States, Britain and France proposed the United Nations Security Council blacklist Masood Azhar, the head of Pakistan-based Jaish-e-Mohammad, the group that claimed responsibility for the Feb. 14 attack. China is likely to be oppose the move.

Thai Airways said it had cancelled more than a dozen flights to Europe due to Pakistan’s move, along with all flights to and from the country.

Several airlines including Emirates and Qatar Airways, suspended flights to Pakistan on Wednesday, while others such as Singapore Airlines and British Airways were forced to reroute flights.

Singapore Airlines said on Thursday all of its Europe-bound flights would continue as planned, avoiding the affected airspace as necessary.

Flights from the Middle East and India were also affected. Air Canada said on Wednesday it has temporarily suspended service to India.

Our View: Politis should not have been gagged in Loizidou affair