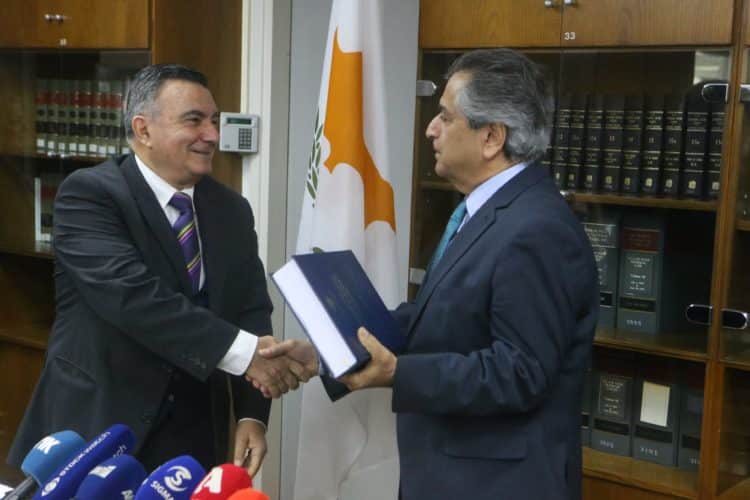 The findings of a probe into the collapse of the co-op bank were handed to the attorney-general on Friday with investigators recommending further investigation into the possibility of commission of civil and criminal offences.

Summing up the more than 800 pages, the head of the three-member committee, former supreme court judge Giorgos Aresti, said the main cause for the collapse was negligence, incompetence, lack of restrain, and greed, exhibited by those who were meant to lead and serve the co-op movement.

“Mr. attorney-general, it is with regret that we find that the work this committee did and its conclusions, essentially constitute rubber-stamping the disappearance of an achievement made by the Cypriot people,” Aresti said. “We feel like we have carried out a death inquest.”

The report was the result of a seven-month probe into the causes of the bank’s demise, starting in 1985 when new procedures were put in place.

It is divided in the period before 2013, the year the island’s economy collapsed and the lender was nationalised using some €1.7bn in taxpayer money, and its management during the five years that followed, resulting in it being shuttered in 2018 and sold to Hellenic Bank.

In both periods “we find that there is scope for further investigations into the possibility of the commission of civil and criminal offences,” Aresti said. He added that his committee also identified political culpability in both periods.

“… the main cause of the co-op’s problems was the human factor, especially the neglect, incompetence, and worse of all, lack of restrain, and greed of the many people who had been tasked with leading and serving the co-op,” Aresti said.

The former judge said their work was particularly difficult, laborious, and complex. Apart from the great number of complex issues, the committee had to deal with the difficulty of accessing classified documents.

A lot were declassified and handed over but some – European Central Bank documents and cabinet minutes – were not.

The committee questioned 75 witnesses during 40 hearings; it has gathered 2,781 pages of statements and 120,000 documents.

Aresti said the committee decided that the report must be published though he said it would be the attorney-general’s decision.

Receiving the report, Clerides pledged that it would be utilised.

“I want to assure your committee, and the public, and any other interested party, that the report will not be left unused, it will not be placed on a shelf or in a drawer,” Clerides said.

The attorney-general said publication of the findings depended on various factors and the time it would take a special team of state attorneys to study it.

Clerides said it had to be ensured that publication would not harm any other process and left open the possibility of publishing the findings piecemeal.

The co-op was compelled to sell its operations to Hellenic Bank in June 2018 after its failure to reduce its non-performing loan stock fast enough, wiped out its equity.

The state-owned lender was jointly supervised by the Central Bank of Cyprus and the European Central Bank’s (ECB) Single Supervisory Mechanism (SSM).