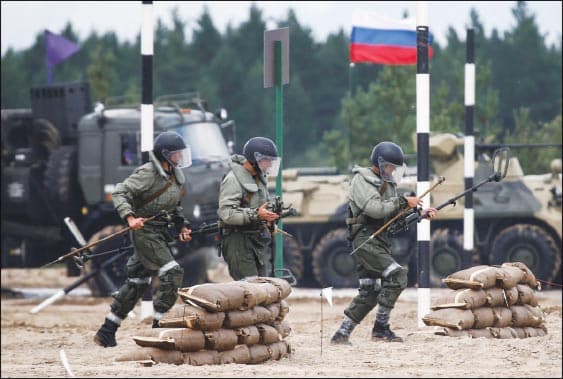 ON November 21, 2018, Ukraine commemorated the fifth anniversary of the Ukrainian people’s Revolution of Dignity, during which they reaffirmed their commitment to European democratic values.

What was the price of this triumph? In November 2013 nobody could imagine that three months later, on February 20, 2014, the Russian-backed government would cross the red line causing bloodshed in Kiev, shooting its citizens (100 people were killed, mostly young, whom Ukrainians would call their heroes of the Heavenly Hundred), and soon after the neighbouring country would embark on its unrelenting armed aggression against Ukraine.

Five years ago, Russia, violated international law by embarking on the occupation of the Autonomous Republic of Crimea and City of Sevastopol. The illegal referendum and the Russian status imposed on the Crimean Peninsula were not recognised by the international community and the lack of preparedness of the international community to react decisively allowed the Kremlin regime to step up its aggression and occupy separate regions of the Donetsk and Luhansk Regions.

The results of the aggression are dramatic and unprecedented for post-war Europe: about 13,000 dead, 30,000 wounded, 1.5 million settlers, massive destruction of the Donbass, usurpation of Ukrainian property in the occupied Crimea and mass violations of human rights by the Russian occupation authorities. This was exemplified by political persecution and intimidation of Ukrainian citizens in order to crush resistance to the occupation and the accelerated large-scale militarisation of the occupied peninsula.

As a result of the occupation of the peninsula, Crimean Tatars and ethnic Ukrainians suffer constant harassment by the occupation authorities and are threatened with imprisonment. About 70 Ukrainian citizens are illegally detained in Crimea and Russia. Most political prisoners are from Crimea.

Russia actively encourages the resettlement of its citizens in Crimean territory. Thus, according to official data of the Russian Federation, during the 2014-2017 period, 102,898 Russians were registered in the peninsula. At the same time, there is a policy to remove ‘disloyal’ people from the territory of the peninsula through deportation, banning entry and the creation of conditions that make it “impossible to reside” in the Crimea.

By September 2018, according to official data from the Russian statistical services, 35,068 people left the Crimea.

The occupation authorities are making every effort to erase the Ukrainian identity and presence from the Crimean Peninsula.

By militarising the Crimean Peninsula, Russia has placed nuclear weapon carriers (ships, missile systems and aircrafts) there. The number of troops in the peninsula is 32,000 and is expected to increase to 43,000.

In November 2018, Russia expanded its aggression to the seas, opening fire against Ukrainian troops in the Sea of Azov and illegally obstructing them.

Prospects for a peaceful settlement of the situation in the Donbass are very remote because of Moscow’s reluctance to honour the terms of the Minsk agreements which it signed. Moreover, under its control there were so-called local ‘elections’ in the occupied territories of the Donbass.

The conflict continues in the Donbass, with Russian-backed militias using heavy weapons, supplied by the Kremlin. Moscow has blocked the proposal for a UN peacekeeping mission in the Donbass and the Ukrainian-Russian border.

In response to the flagrant violation of international law – military aggression against Ukraine and violations of its sovereignty and independence – the European Union and the United States imposed sanctions on individuals and entities that are involved in the above-mentioned goings-on in Ukraine.

The Russian Federation, despite appeals from the international community to stop the aggression against Ukraine, continues to pursue it objectives in the international arena, using hybrid mechanisms to achieve its goals.

Despite being in the fifth year of the war, Ukraine continues its path in the European direction. In February 2019, the Verkhovna Rada (Parliament) of Ukraine introduced amendments to the Constitution. These amendments make the strategic course of Ukraine to join Nato and the European Union irreversible. Defence and security sectors are being reformed to be brought in line with the Euro-Atlantic standards, while economic, medical and social reforms are in progress.

Ukraine expresses its sincere gratitude to the Republic of Cyprus for its strong position regarding the sovereignty, independence and territorial integrity of Ukraine and its cooperation in international organisations.

Restoration of the territorial integrity of Ukraine is necessary not only to ensure the future of Ukrainian people. It is a condition for restoring confidence in the European and world security system, which should be based on the unconditional respect of independent states in accordance with international law.

Borys Humeniuk is the Ambassador of Ukraine in Cyprus

Our View: Gas find the start of a long journey