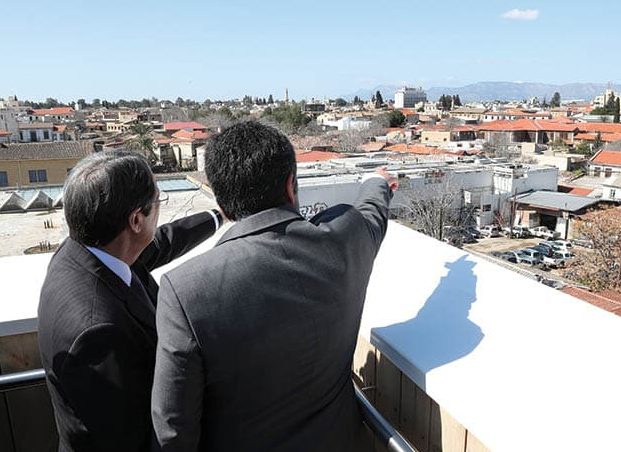 Nicosia on Friday saw the inauguration of its new town hall, returning to the heart of the capital after around 100 years.

“We are here to reaffirm our vision, will, and determination to continue the effort to rejuvenate the entire area of the city’s historical centre,” Mayor Constantinos Yiorkadjis said, welcoming President Nicos Anastasiades.

He said the municipality had refused to abandon the area “exactly because it is the geographic and administrative centre of the Republic of Cyprus.” Abandoning the area would be tantamount to an indirect acceptance of the fait accompli of the invasion and occupation, he said.

The new building, designed by Margarita Kritiotis and Dickon Irwin of IRWINKRITIOTI. ARCHITECTURE, is inspired by international principles regarding interventions in historic urban centres but also the local characteristics of the city and traditional architecture.

The building also has batteries to store the excess energy produced by its photovoltaic system. The installation of the batteries was part of a partnership programme with the University of Cyprus and the electricity company, EAC.

Construction of the new building hit considerable delays after antiquities were discovered on the site. It was decided that the two could co-exist, also causing a hike in the budget.

“But the result is a prime example of the difficult endeavour,” the municipality said.

The municipalities different services moved into the new building in October last year, after many years of being scattered around the city.

The antiquities department is currently doing maintenance work on the site while a project to turn it into an archaeological park is underway.

The project entails construction of an elevated area that will allow the public to access the site.

In his speech, Anastasiades described it as “an historic day for Nicosia” and called the new town hall a “gem”.

“At the same time, the concentration of all the municipal services in one building complex strengthens its function and improves the efficiency of the municipal machine in order to better serve the citizens of the city,” he said.

He also referred to a number of ongoing projects in the capital. While recognising and understanding the inconvenience they cause the residents, Anastasiades said that upon completion they would change the face of Nicosia “making it a modern city with high quality infrastructure, and a city more friendly and accessible for citizens and visitors”.

“I have no doubt that the benefits in the medium and long term, the economic, touristic and cultural level and quality of life will outweigh some of the discomfort that exists today,” he added.

Speaking of ongoing local government reform, Anastasiades suggested that Nicosia municipality would end up merging with Engomi and Ayios Dhometios as part of the overhaul.

The other ongoing projects in the capital would turn Nicosia turn it “into a real administrative capital” considering that with reform, the municipality could include all those administrative centres that have moved outside, in other jurisdictions.

Aglandjia, he said, would adjust with Nicosia, as would Engomi, and Ayios Dhometios.

Part of the reform is to cut the number of municipalities by around 50 per cent, to 15. There have not been any official proposals yet, only tabletop exercises.

Anastasiades said the abolished authorities would be turned into wards with sufficient representation in decision making. He stressed that municipalities must change so as to create the necessary synergies that will attract investment.

The aim he said was to have authorities with administrative and financial autonomy, to grant them the power to carry out projects without depending on the central government.

He conceded that differing views existed but with further discussion the reform will go ahead, possibly after the European elections, when expediency brings everything to a halt.

SpaceX to launch capsule to space station in key milestone