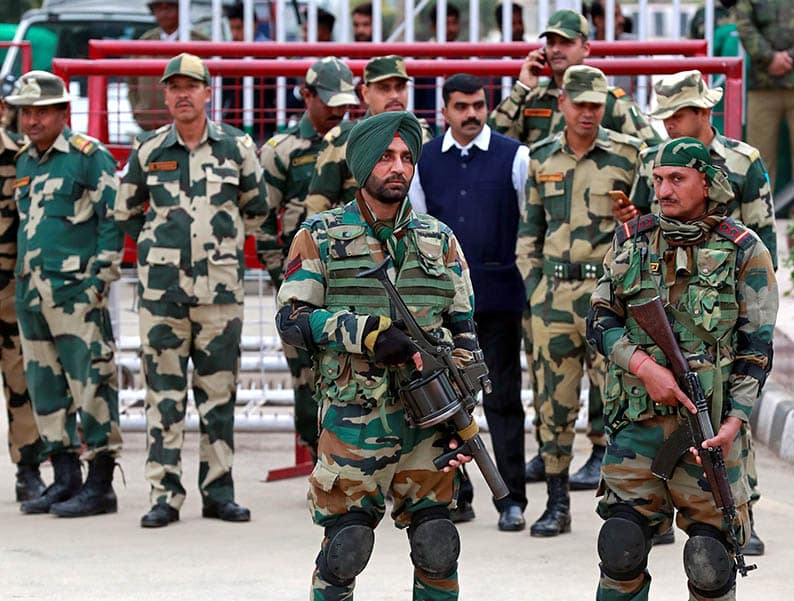 Indian soldiers stand guard before the release of Indian Air Force pilot Wing Commander Abhinandan, who was captured by Pakistan on Wednesday, at Wagah border, on the outskirts of the northern city of Amritsar, India

P akistan handed a captured Indian pilot back to his country on Friday as the nuclear-armed neighbours scaled back a confrontation that has prompted world powers to urge restraint.

Television footage showed Wing Commander Abhinandan walking across the border near the town of Wagah just before 9.00 p.m. (1600 GMT). Indian officials confirmed he had been returned and said he would be taken for medical checks.

Abhinandan’s MiG-21 jet was shot down by a Pakistani fighter during an aerial clash over the disputed Kashmir region on Wednesday as two weeks of growing tensions between the two countries erupted into open hostilities.

The plane crashed on the Pakistani side of the de facto border that separates the two sides of Kashmir, a Himalayan region that has been a source of hostility between the two countries ever since independence from Britain in 1947.

Pakistan, which agreed to release the captured pilot as a “gesture of peace,” has been at pains to insist it wants talks to end the crisis. The United States and other world powers have urged restraint.

Before the pilot was released, Pakistani television stations broadcast video of him, looking cleaned up and thanking the Pakistani army for treating him well.

“The Pakistani army is a very professional service,” he said.

Throughout the day, crowds on the Indian side thronged the road to the crossing, shouting nationalist slogans and waving Indian flags.

“Pakistan is releasing our pilot, I thank them for that,” said Kulwant Singh, who has run a food stall at the crossing for 20 years.

There was some firing along the contested border dividing Kashmir on Friday, according to a spokesman for India’s defence ministry, but the hostilities were well short of previous days.

Pakistan reopened some airports on Friday, after easing airspace restrictions that had disrupted flights between Asia and Europe for several days during the conflict.

Relations between the two countries, however, remain strained.

Qureshi said he would not attend a meeting of foreign ministers from the Organisation of Islamic Cooperation in Abu Dhabi this weekend, because his Indian counterpart had been invited to the event.

India also faces an ongoing battle against armed militants in its portion of Kashmir. On Friday, four security personnel and a civilian were killed in a gun battle with militants, officials said.

Kashmir has been at the root of two of the three wars fought between India and Pakistan.

Larnaca official guilty of being on the take