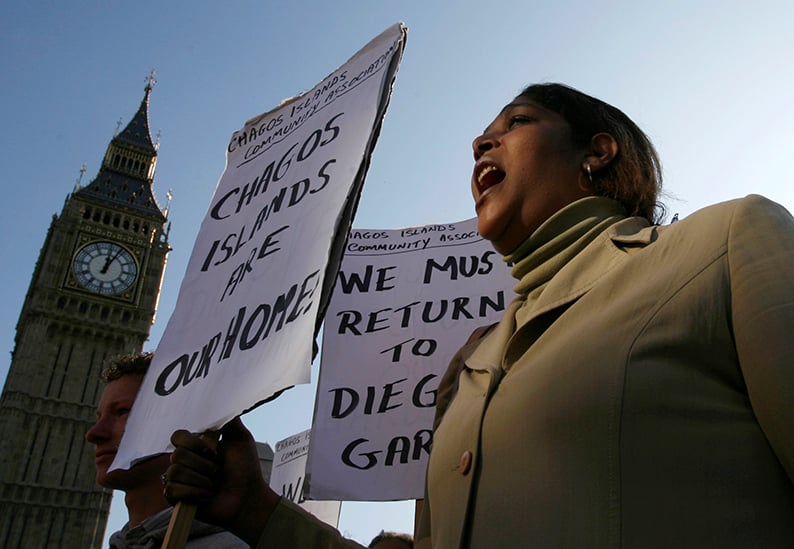 FILE PHOTO: FILE PHOTO: A demonstrator demanding her return to the Chagos Islands in the Diego Garcia archipelago shouts during a protest outside the Houses of Parliament in London October 22, 2008. REUTERS/Andrew Winning/File Photo/File Photo

Mauritius is a beautiful island state in the middle of the Indian Ocean. It is a member of the UN and the British Commonwealth with a population slightly larger than Cyprus. It is a multi-racial society comprising Indians, Africans, Chinese and Europeans who have blended well and managed to become a people. They speak French Creole, English – with a French accent – as well as their mother tongues.

Mauritius had been French until the defeat of Napoléon in 1814-1815 when it became a British colony. During the process of decolonisation between 1965-1968, Britain detached a group of islands to the northeast of Mauritius known as the Chagos Archipelago and regrouped them into a new colony known as British Indian Ocean Territories.

The Chagos Islanders – people mostly of mixed African Indian descent – were not consulted. The biggest island in the archipelago, Diego Garcia, was leased to the US for use as a military base and the Chagos Islanders were removed from their homeland and forbidden to return. The political leadership in Mauritius agreed to this arrangement and accepted compensation and an ex gratia payment.

Last week the Chagos Islanders won a stunning legal victory in the International Court of Justice (ICJ) against Britain about the legality of the way decolonisation was completed in Mauritius between 1965-1968.

Mauritius itself could not bring the proceedings against the UK in the International Court of Justice on the legality of the treatment of the Chagos Islanders without the consent of the government of UK, which was not forthcoming. However, the UN General Assembly has jurisdiction to ask the ICJ for an opinion on any legal question that assists it in the performance of its function of developing the scope and content of the obligations of states under international law.

In light of this, the General Assembly requested an advisory opinion from the ICJ on two questions. First, whether the process of decolonisation had been lawfully completed in Mauritius; and second the legal consequences of the inability of Mauritius to resettle its nationals on the Chagos Archipelago.

In considering decolonisation in Mauritius the ICJ focused on the state of international law between 1965 and 1968 and decided that by that stage the principle of self-determination had emerged from a political aspiration to a full-blown rule of customary international law. The court decided that colonial powers were bound by the principle of self-determination that included respect for territorial integrity: ‘any detachment of part of a non self-governing territory unless based on the freely expressed and genuine will of the people of the territory concerned is contrary to the right of self-determination.’

The judgement of the ICJ is not esoteric or difficult to understand. It begins with the UN Charter of 1945 in which self-determination of colonial peoples was declared to be one of the UN’s purposes. By the way, although self-determination is a hugely important right, how it is expressed and who are people have been deliberately left open.

Even so, self-determination was declared a political obligation by a General Assembly resolution in December 1960 while a number of colonies were granted independence – Ghana in 1957, Cyprus and Nigeria in 1960 to name but a few.

Three General Assembly resolutions between 1965 and 1968, however, proved decisive. One invited Britain not to take action that would dismember the territory of Mauritius and two reiterated that dismembering territories during decolonisation to establish military bases was incompatible with the principle of self-determination.

Customary international law develops by a process of osmosis of policy, state practice and a willingness of states to be bound. One of the ways customary law emerges is that states demonstrate in the way they vote for resolutions of the General Assembly their acceptance and willingness be bound by obligations under the UN Charter reiterated, refined and developed over time.

Thus the ICJ was able to hold that by the relevant period of the decolonisation of Mauritius between 1965-1968 the right to self-determination that begun life as a political aspiration in 1945 had crystallised into a legal right with scope and content. In the result, the court was able to say definitively that as the detachment of the Chagos Islands was not based on the free and genuine expression of the will of the Chagos Islanders it was contrary to the right of self-determination. That being so, the decolonisation of Mauritius had not been lawfully completed and Britain’s continued administration of the Chagos Archipelago is a wrongful act which had to be brought to an end.

Those are the facts and that is how international law developed. But just because the British kept two sovereign bases (SBAs) in Cyprus does not mean that Britain has a case to answer that she retained sovereignty over territory in Cyprus unlawfully. On the contrary, the Chagos Islands case shows the opposite to be true.

First, there is reason to believe that the Cypriot population living in the SBA in 1960 would have voted overwhelmingly in favour of the bases, not least because most Turkish Cypriots would most certainly have voted for retaining the British bases at Episkopi and Dhekelia. Indeed if asked most Turkish Cypriots in Cyprus would have voted in favour of remaining a British colony for a little while longer, which for them and, dare I say it, for many Armenians and Maronites and Latins and Greek Cypriot Communists and many others too frightened to speak out, was preferable to uniting with Greece.

Also, many Cypriots were very grateful for the employment opportunities the SBA provided. My family certainly was as my father worked as Registrar of the SBA that enabled us to live a modestly comfortable life.

Add to that the sense of security the SBA provided when the troubles broke out in 1963 and again in 1974 and the bases were places of refuge and comfort for Turkish Cypriots in Episkopi and for Greek Cypriots in Dhekelia and the comparison with the treatment meted out to the poor Chagos Islanders becomes absurd.

Even the president of Cyprus, Archbishop Makarios, was saved from the fascists in 1974 owing to the existence of the SBA. For those who do not know they were closing in to kill him when he was whisked away by an RAF helicopter to the British base at Akrotiri from where he was flown to UK to the safety of the Dorchester Hotel in London’s Park Lane.

All this is quite apart from the detailed provisions protecting the rights of the Cypriot residents of SBA negotiated in the independence treaties signed by Cyprus on one side and Britain, Greece and Turkey on the other. The treaties were deposited with the UN on the basis that nothing in those treaties including the SBA was inconsistent with the UN Charter.  Cypriot politicians across the divide need to be constantly reminded that treaties must be performed in good faith – not cherry-picked for the bits that suit: pacta sunt servanda.

So here today gone tomorrow politicians should spare us the hysteria about the Chagos judgement and concentrate on the real task of getting a comprehensive settlement whereby the Cyprus problem is solved and the British return some land –  as they offered in 2004 –  and more importantly agree expressly that the SBA will only be deployed in the lawful use of force in wars that are legal.

Block 10 gas find is a game-changer