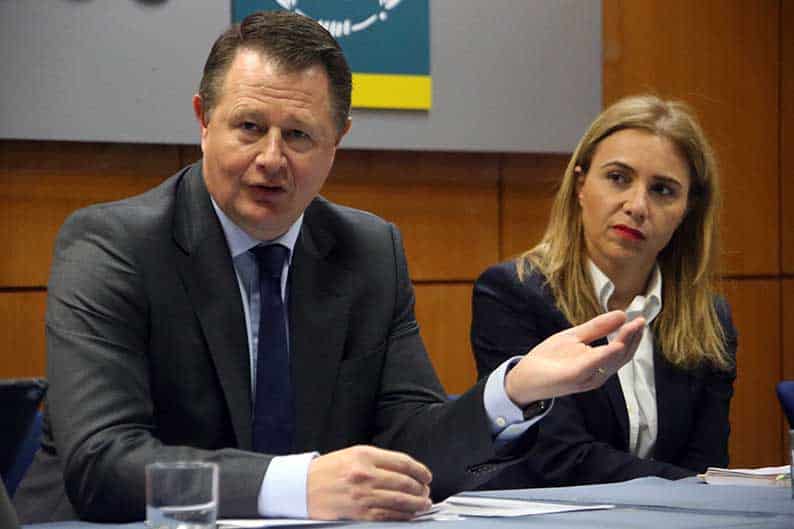 By the time he leaves, John Hourican will have spent nearly six years as the group’s chief executive officer

THE Bank of Cyprus is in the strongest capital position it has been within living memory and has clear plans to complete its recovery, six years after it was forced to seize deposits to recapitalise as part of the island’s bailout, outgoing CEO John Hourican said on Monday, officially announcing his decision to step down in September.

Speaking at a news conference during which the lender announced its 2018 results, the Irish banker said the bank was in a very strong position to proceed to the next chapter.

“The bank has made huge strides in its recovery during that period and today we represent a bank that has the strongest capital position it had within living memory,” he said. “A bank that it also has very strong liquidity and a bank that has plans that are very clear for finishing the job.”

Hourican said after six years in Cyprus he was leaving the bank in September to take up a commercial opportunity in the UK. His contract had been renewed last year until the end of 2020.

He said he was leaving mainly for family reasons and that there was “no conspiracy theory” about his resignation.

“This does feel like a moment when we can call an end to one chapter and then begin another.”

Despite posting a €100m loss, Hourican said the CET 1 ratio of 15.4 per cent and total capital of 18.3 per cent were huge and comfortable ahead of the bank’s 2019 supervisory review and evaluation process on those ratios.

He also referred to the reduction of Non-Performing to Exposures (NPEs) to €4.8 billion or 35 per cent, the upcoming Estia scheme that would help further reduce NPEs, the legislative amendments on deferred tax, and the very strong liquidity position of the bank, €4.4bn.

He also noted that loan to deposit ratio was 65 per cent while six years ago it was over 150 per cent.

Hourican said the stock market was also recognising that it was a strong with a positive set of results, although mildly dampened by the fact that there would be some leadership change in the next six months.

“I think you should consider these results as positive,” he said and “putting paid to some of the silly rumours that have been circulating in Cyprus over the past few weeks.”

Hourican joined BoC in late 2013, the most dramatic year in the bank’s history, in which depositors saw almost half of their uninsured deposits turned into equity.

Known for his no-nonsense approach and his criticism of Cypriot politics, in November 2015 he accused politicians of being populist and making the bad debt situation in the banking sector worse with their actions.

In an interview with the Associated Press, he said it had been embarrassing for him to explain to people abroad, actions that had delayed and diluted the foreclosures legislation, which was supposedly designed to help banks deal with NPEs effectively.

“The parliamentarians have decided heading into an election year that it’s good to raise populist measures and what they’re doing is driving up delinquencies and not helping us fix them,” Hourican said ahead of the parliamentary elections in 2016.

One retired senior BoC executive felt Hourican had hoped to turn things around quickly at the bank, “but he did not factor in the role played by the political parties and MPs that know nothing about the long-term sustainability of the banks.”

But the former banker also wondered whether the priority of the bank under Hourican, was the “interests of its big shareholders rather than the medium-term interest of the economy, which should have been the main priority of the island’s biggest local bank.”

Hourican was on a salary of €2.2m a year, which was almost 20 times higher than the second- best paid executive at the bank, said the retired banker.

“This goes against the principles of corporate governance, because it is a reflection of the dictatorial powers granted to the CEO,” he said.

Hourican came to the island after being head of investment banking at RBS, where he became “a politically trussed up and highly paid sacrificial lamb in the Libor rigging scandal in which he played no part,” according to the Sunday Times in Dublin.

In an interview with the paper Hourican said his decision to come to Cyprus was partly driven by the injustice of the bail-in on the island.

“I think the bail-in of depositors was a very aggressive act towards a small nation that had sat within the protection of a larger federation,” he says. “I felt the country had been poorly treated.”

The boards of BoC Holdings and the bank itself said they will launch, in line with the Corporate Governance Code, the process of identifying a suitable candidate to succeed Hourican.

In an announcement, the boards expressed their “thanks and deep appreciation” to Hourican “for his leadership and exceptional service to the Bank of Cyprus Group during the most critical period in its recent history”.

Hourican, the announcement said “has guided the bank’s restructuring, its recapitalisation, a restoration of confidence, and has been instrumental in developing appropriate strategies for dealing with the challenge of coping with large nonperforming exposures, shrinking the bank to strength, and developing a strong senior executive team that will guide the bank in the period ahead.”

“I want to express mine and the boards’ sincere thanks to John for playing such a pivotal role in the group’s repair and for devoting nearly six years in leading the Bank of Cyprus Group,” said the boards’ outgoing chairman Josef Ackermann.

“John remains committed to leaving behind a strong management team and a bank in a steadily improving financial shape, with restored customer confidence. We will continue to work closely with him in the months ahead, also ensuring a smooth transition to the new leadership.”

Sky News reported over the weekend that Hourican was about to be named chief executive of NewDay, a consumer finance provider which runs co-branded credit cards with retail giants‎ including Amazon, Sir Philip Green`s Arcadia Group, Debenhams and the tour operator Tui Travel.

From Gounaris to Sinatra