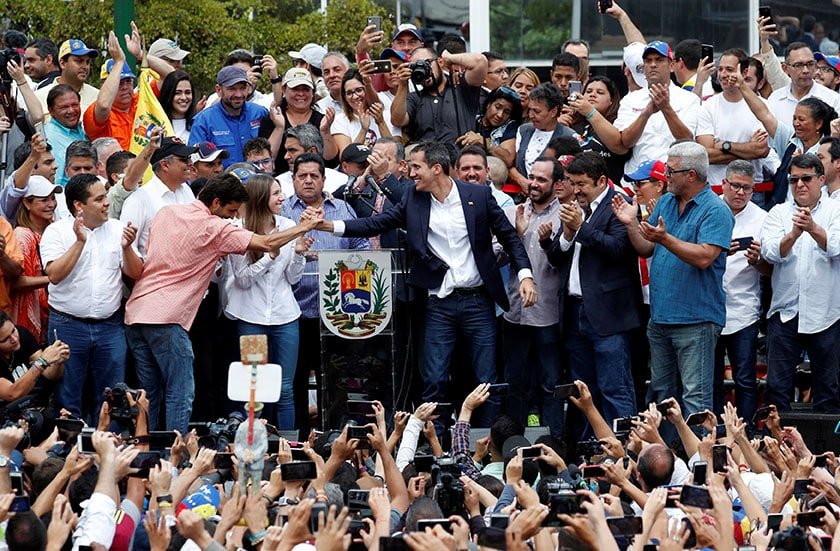 Venezuelan opposition leader Juan Guaido, who many nations have recognised as the country's rightful interim ruler, greets supporters during a rally against Venezuelan President Nicolas Maduro's government in Caracas,

Venezuelan opposition leader Juan Guaido returned to his country on Monday after flouting a court-imposed travel ban by touring Latin American countries to boost support for his campaign to tighten regional pressure on President Nicolas Maduro.

A crowd of cheering supporters greeted Guaido and his wife as they stepped into the Maiquetia airport’s arrivals hall, and then sped to an opposition rally in eastern Caracas where thousands had gathered to welcome him.

The return of Guaido, recognized by most Western nations as Venezuela’s legitimate head of state, signals that Maduro’s adversaries have at least temporarily avoided the arrest of a leader who has united the traditionally fractured opposition.

But it will also lift pressure on Maduro to act against Guaido as his authority continues to wane and the country’s economic meltdown fuels malnutrition and hunger.

“Hope has been born and it will not die – things are going well,” Guaido told the crowd at a plaza in the Las Mercedes district. “We are going to celebrate this small victory today.”

He announced plans to meet on Tuesday with public employees, who have been historically pressured by the ruling Socialist Party to join pro-government rallies, as well as for a major march on Saturday.

Guaido secretly left Venezuela for Colombia, in violation of a Supreme Court order, to coordinate efforts there on Feb. 23 to send humanitarian aid into Venezuela to alleviate widespread shortages of food and medicine.

But troops blocked convoys of aid trucks sent from Colombia and Brazil, leading to clashes that killed at least six people along the Brazilian border, rights groups say.

From Colombia, he traveled to Argentina, Brazil, Ecuador and Paraguay to shore up Latin American support for a transition government that would precede free and fair elections.

On Sunday, he departed by plane from the Ecuadorean coastal town of Salinas but had not appeared publicly since. Venezuelan media outlets reported that he flew from Panama City to Caracas.

He had kept details of his trip under wraps and he arrived without prior notice, meeting ambassadors for European countries at the airport.

Guaido calls Maduro a usurper and says his presidency is illegitimate after he secured re-election last year in a vote widely considered a sham. Maduro retains control of state institutions and the apparent loyalty of senior figures in the armed forces.

Asked by a reporter how he was received at the airport by immigration authorities, who could have prevented his entry for violating the travel ban, Guaido said they addressed him as president – a swipe at Maduro, who calls him a U.S. puppet.

“Here’s my passport, safe and sound,” Guaido said, showing it to the crowd.

The Information Ministry did not immediately respond to a request for comment.

Maduro, who denies there is a humanitarian crisis in Venezuela, has said Guaido’s arrest depends on the justice system.

“He can’t just come and go. He will have to face justice, and justice prohibited him from leaving the country,” he told ABC News last week.

“If the regime has even a little bit of conscience, they should not arrest Guaido because people truly would not put up with it,” said Franklin Lopez, a 60-year-old administrator.

The United States has warned Maduro of the consequences of arresting Guaido and the U.S. Treasury imposed new sanctions on Friday targeting Venezuelan military officials.

After the military blocked the aid convoys, Guaido proposed that “all options be kept open” to topple Maduro, but foreign military intervention is seen as unlikely and his international backers are instead using a mix of sanctions and diplomacy.

The government has jailed dozens of opposition leaders and activists for seeking to overthrow Maduro through violent street demonstrations in 2014 and 2017, including Guaido’s mentor, Leopoldo Lopez, who remains under house arrest.

Turning away from previous hopes of a swift end to Maduro’s government, Guaido said on Sunday it would be a “long and difficult process.”

He has offered future amnesties to state officials and solders who recognize Guaido, though the military has largely remained loyal to Maduro despite Colombia’s migration agency reporting several hundred desertions since Feb. 23. (Additional reporting by Vivian Sequera, Fabian Cambero, and Shaylim Valderrama in Caracas, Marco Bello in Bogota, and Efrain Otero in Maiquetia Writing by Angus Berwick and Brian Ellsworth Editing by Clarence Fernandez, Susan Thomas and James Dalgleish)