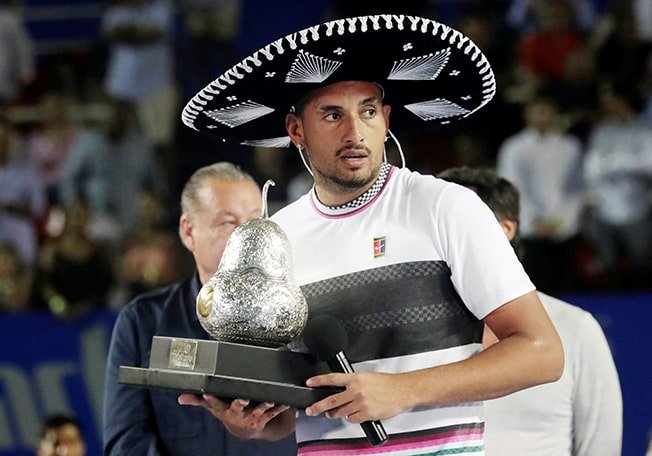 Arriving in Mexico coach-less and ranked 72 in the world, Nick Kyrgios blazed through the draw, taking out Rafa Nadal, Stan Wawrinka and John Isner before outclassing Alexander Zverev 6-3 6-4 to claim his fifth career title

A few hours after the serene Roger Federer collected the 100th ATP title of his career in Dubai, Nick Kyrgios was preparing for his Mexican Open final against Alexander Zverev — on a jet ski.

The Four Tops once sung about Going Loco Down in Acapulco and that disco classic is a fitting soundtrack for another remarkable week in the turbulent career of Kyrgios.

Arriving coach-less and ranked 72 in the world, the 23-year-old Australian blazed through the draw, taking out Rafa Nadal, Stan Wawrinka and John Isner in three-set epics before outclassing Zverev 6-3 6-4 to claim his fifth career title.

En route he rowed with umpires and fans, played shots others cannot even dream of and angered 17-times Grand Slam champion Nadal.

Zverev, two years younger but already with twice Kyrgios’s title haul, is the man likely to fill the void when Federer, Nadal and Novak Djokovic end their careers.

Others like charismatic Greek 20-year-old Stefanos Tsitsipas, American Frances Tiafoe and any number of Russian tyros are all tipped for big things.

But when it comes to really shaking up men’s tennis, Kyrgios is peerless.

So ‘professional’ has the sport become, such a high bar set in terms of skill, fitness and sportsmanship by the greatest trio of champions the game has witnessed, that a genuine maverick who gears up for a final by roaring around in the Pacific surf should have no chance.

But Kyrgios, described by none other than American former world number one John McEnroe as the greatest talent he has seen in the last 10 years, is doing his best to disprove that theory.

The ambassadorial Federer and Nadal, with 37 Grand Slam titles between them, are revered by fans, media and fellow pros alike, as is Djokovic, even if the Serb is not hero-worshipped to quite the same degree.

Kyrgios, on the other hand, has scant regard for popularity contests and likes nothing more than thumbing his nose at tennis convention, whether with his eclectic shot-making or relaxed attitude to the sport’s etiquette.

As was illustrated once again in Mexico, he is not afraid to ruffle feathers, whoever they belong to.

Near the end of his superb second-round win over the enormously popular Nadal, Kyrgios had the temerity to dink in an underarm serve, trying to catch the Spaniard off guard.

Nadal later raised a furrowed eyebrow, accused Kyrgios of “lacking respect for the public, the opponent and toward himself”, adding “there is a reason” why the mercurial Australian is struggling to sustain his form.

Kyrgios has at various times in his colourful career been accused of tanking matches and shunning practice. He has accumulated numerous fines for petulance and been banned for vulgar comments about another player’s girlfriend.

He shrugged off Nadal’s comments, basically saying he could not care less what the Spaniard thought.

In his next round against Stan Wawrinka, a player with whom he has history, he was booed by the Mexican crowd when he walked on and again when he fell and bloodied his hand — prompting a barrage of expletives.

Afterwards he said “getting stink” from the crowd fired him up — a trait former tennis wild things McEnroe, Jimmy Connors and Ilie Nastase shared.

While Kyrgios’s behaviour polarises opinion — he puts bums on seats, whether to cheer or jeer him. Tournament promoters welcome his name in the draw.

Some may view his cheeky “underarm serve” against Nadal as breaking what Wimbledon runner-up Kevin Anderson says is “an unwritten rule”. Others might suggest a player not prepared to bow at the feet of tennis royalty should be applauded.

One of them, perhaps surprisingly, is Federer himself.

“Yeah, underarm is definitely a tactic, I believe,” the Swiss stylist said.

“Especially when guys are hugging the fence in the back. From that standpoint, shouldn’t be ashamed if you try it. Just look silly if you miss.”

After driving Zverev a little loco on Saturday, Kyrgios was adorned with a huge sombrero, then said he might need to “be more professional” to rise back up the rankings.

For the sake of entertainment, hopefully he can achieve that in his own inimitable style.