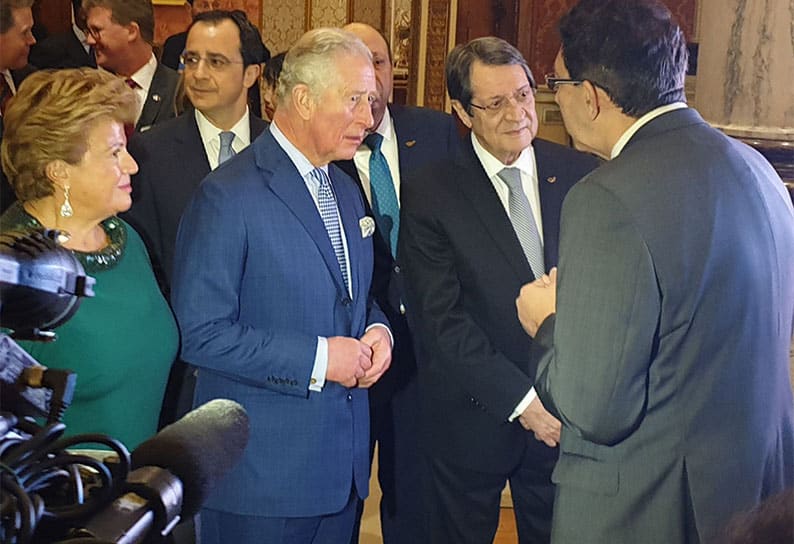 President Nicos Anastasiades on Monday attended a special event in honour of Cyprus at Buckingham Palace hosted by the Prince of Wales.

Dubbed Celebration for Cyprus, the event was attended by more than 100 Cypriots living and working in the UK and included an exhibition of archaeological artefacts from Cyprus, an exhibition of old authentic maps of Cyprus, and a thematic exhibition with regard to university and academic cooperation.

On Tuesday, Anastasiades is scheduled to meet Prince Charles and Prince William and in the afternoon, he will be meeting Prime Minister Theresa May where Brexit will feature high on the agenda.

On Wednesday he will meet Queen Elizabeth at Buckingham Palace.

On Sunday, the president attended a dinner hosted by Cypriot expats in the UK whom he briefed about developments in the Cyprus problem.

He said it was Turkey’s intransigence that led to the collapse of the talks in Switzerland in 2017 and pledged to keep trying to reunite the island with a settlement that will be viable, functional, and stand the test of time.

Referring more specifically to the efforts to resume settlement talks, he said that the Cypriot, Greek, British and European sides have met with the UNSG special envoy for Cyprus Jane Holl Lute three times.

“We are waiting for the third meeting with Ankara to be finalised. A lot will depend on what will be said, but also on what the terms of reference will entail,” he said.

He then stressed the significance of the content of the terms of reference, saying that it is important they are based on the terms discussed at the Crans-Montana morning meeting of the July 4, 2017.

He criticised the fact that no official UN minutes of that meeting exist, adding however, that “thankfully some people made sure detailed minutes were kept.”

He again rejected as “unacceptable” the document regarding the terms of reference that was presented by former UNSG special adviser Espen Barth Eide, speaking of positions that were “misrepresented”.

“In order for us to be able to move ahead, to be able to hope for a constructive dialogue, what is required is that the terms of reference not only determine the issues under discussion, but also what is acceptable and what is unacceptable. And we have agreed with the Turkish Cypriot leader in the past, and it is a principle that has been accepted by the UNSG, that one side’s security cannot constitute a threat for the other side,” Anastasiades added.

He elaborated by saying he could not accept the Turkish Cypriot community’s demands on political equality and effective participation, as their requirement for a positive vote by them on state decisions would mean they would “impose” on the Greek Cypriot community.

He noted that political equality and effective participation are accepted but to the extent where they would be reasonable, i.e. where a decision by the community with the larger population would negatively impact on the other community.

“If we consider, and I regret to say it, the dependence of the Turkish Cypriots from Ankara, then you realise that in the end it would not be them that decided, but the ones having the control,” he said.

Our View: We should expect no prosecutions over the Co-op