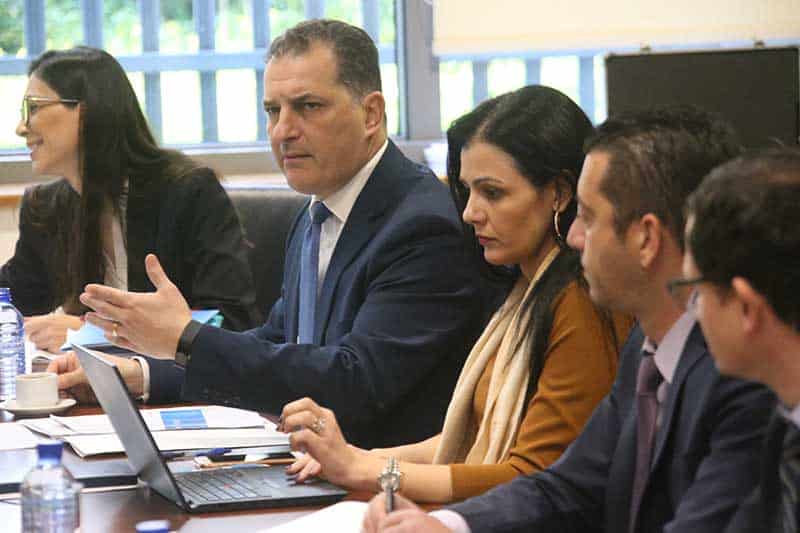 energy Minister Lakkotrypis at the House on Tuesday (Christos Theodorides)

Lawmakers on Tuesday sounded optimistic about ExxonMobil’s recent discovery of natural gas offshore Cyprus, some opining that the find could put the island back on the energy map.

MPs were given a behind-closed-doors briefing by Energy Minister Giorgos Lakkotrypis and head of ExxonMobil Cyprus Varnavas Theodosiou.

Speaking to reporters later, MP and chair of the House energy committee Andreas Kyprianou said the briefing confirmed “the very important results, especially optimistic for the Republic of Cyprus both in terms of energy and geopolitics.”

Last week Exxon announced a gas find of 5-8 trillion cubic feet (tcf) in an offshore field inside Block 10 of the island’s exclusive economic zone (EEZ). The discovery re-ignited talk of construction of a liquefied natural gas facility on the island, although more quantities of gas would be needed.

According to the information given to MPs, the US oil and gas giant is considering further drilling in the EEZ, within Block 10 and possibly in other licensed acreages.

“Most importantly, ExxonMobil are here to stay, and their interest in the Cypriot EEZ remains strong.”

The recent discovery boosts prospects of having an LNG plant in Cyprus, although this would take years and depended on additional gas discoveries, Votsis added.

For it to be viable, an LNG plant would require a capacity of 10 to 15 tcf. The 5 to 8 tcf discovered in Block 10 falls well short of that, but Exxon have intimated they will continue their search for gas.

For his part, Akel’s Costas Costa welcomed the discovery but said that at the same time it puts the onus on the government to develop a coherent and consistent energy policy.

The Akel deputy also asked the energy minister for an update on the talks between Cyprus and Israel regarding the commercial development of the Aphrodite gas reservoir in Block 12.

A small part of the reservoir is said to lie within Israel’s EEZ. The companies involved on either side have thus far not reached agreement on how to divvy up the resources.

According to Costa, Lakkotrypis said only that negotiations with Israel are ongoing.

The energy minister was also asked about the state of play in the talks between the government and the companies holding the concession on the Aphrodite field (Noble, Delek and Shell).

The companies are reportedly seeking to amend the production-sharing contract they signed with the government.

Lakkotrypis told MPs that discussions on this are continuing and that an outcome should be expected “soon.”

Jazz for a saxophone and piano