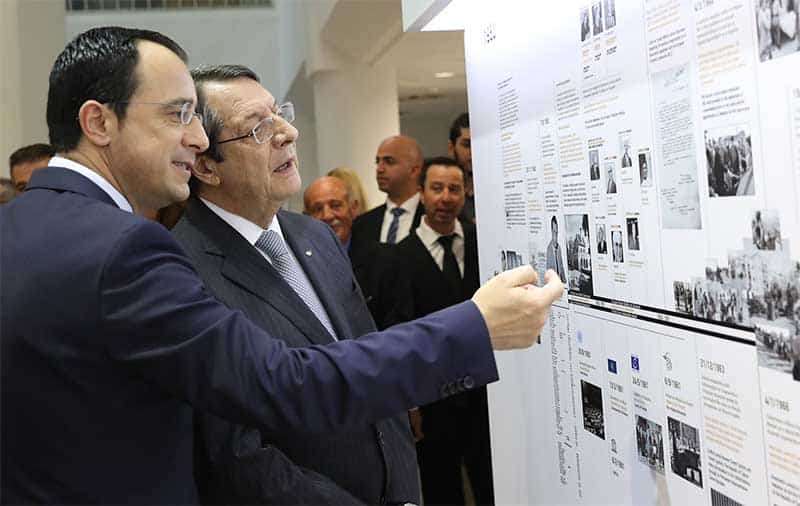 An exhibition showing the operations of the foreign ministry through the years will be open later this month following the idea by Foreign Minister Nicos Christodoulides.

“Many times people don’t realise that what is happening regarding Cyprus has to do with the foreign ministry, as most work is done abroad,” head of communications at the ministry Demetris Samuel said. “We wanted to explain what our role is.”

“We wanted something modern, so it is a timeline rather than photographs,” The Foreign Ministry through the Years curator Anna Marangou told the Cyprus Mail.

The history line starts in 1960 with black and white photos, and only in the 1980s do colour ones start to appear, while in the 90s and afterwards all pictures are in colour.

Every past foreign minister who is still around commented on what they thought were the most important parts during their time, and contributed to the text and photos.

Turkish Cypriots played an important part in the beginning, and Samuel said the ministry hopes they will soon be part of the collection again.

Actually, the first photo of the timeline depicts Turkish Cypriot Ismet Guney, who designed both the modern Cypriot flag and the emblem of the newly founded Republic in 1960.

Soon after, in 1961, the ministry sent the first seven diplomats abroad, of whom two were Turkish Cypriots.

Nowadays, 160 diplomats work in Cyprus and abroad, though there were even more, around 200, before the economic crisis in 2013.

One of the perhaps lesser known facts reported on the board is that Cyprus was interested in joining the European Union as early as 1962, when then Foreign Minister Spyros Kyprianou sent a letter declaring the country’s interest.

In total, there are more than 500 photos and the accompanying text is in English, Greek and Turkish.

The exhibition at the ministry of foreign affairs will be open to the public every Wednesday (except on public holidays) from 11am to 2pm from March 20 until June 19, 2019. Special arrangements can be made for visits by organised groups. For more information, Tel: 22-651299 or email [email protected]

Spend Green Monday in the woods