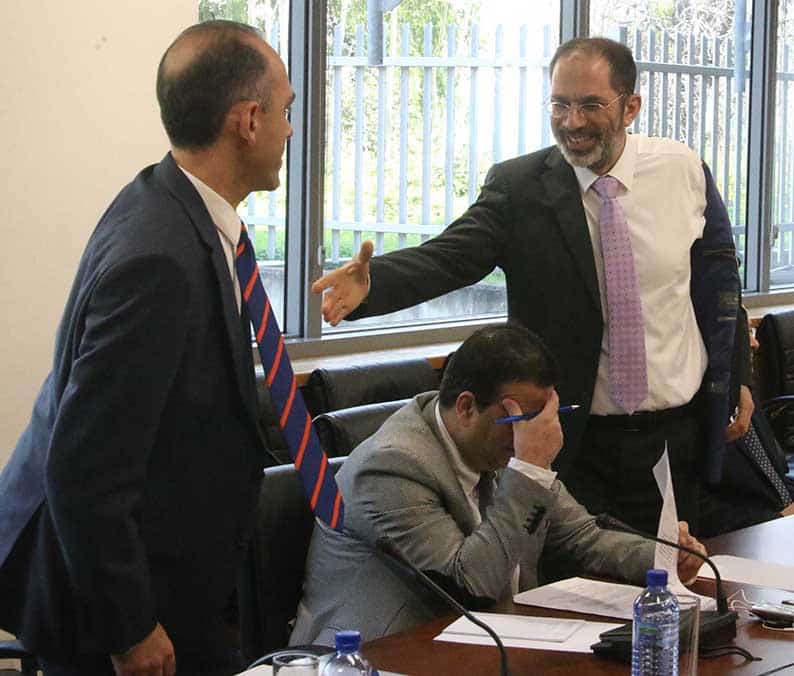 PRESIDENT Nicos Anastasiades on Thursday evening threw his weight behind his finance minister, dismissing calls for the minister’s removal following a damning report about the demise of the co-op bank.

In a statement, the president said he had full confidence in finance minister Harris Georgiades.

Anastasiades disagreed with the report’s finding that Georgiades was politically responsible for the co-op’s ultimate fate.

He was alluding to the year when the lender was nationalized.

But as the record shows, the bank’s demise was primarily due to the non-performing loans accumulated prior to 2013, the president added, citing excerpts from the report itself.

This rendered moot any calls for the minister’s resignation or dismissal.

Anastasiades listed off a number of achievements he attributed to his finance minister.

Under Georgiades’ watch, he noted, the state was saved from a disorderly default, Cyprus successfully exited the international bailout deal, depositors’ savings were protected, bank employees kept their jobs, and the co-op’s assets were safeguarded.

Last but not least, said Anastasiades, the co-op’s sale last year was welcomed by EU institutions as well as by credit rating agencies, who went on to upgrade Cyprus’ sovereign rating to investment grade.

“In light of the above, I wish to reaffirm the government’s economic policies and to reiterate that the finance minister enjoys my absolute trust.”

The president’s statement came at the end of a long day of Georgiades taking a buffeting from all sides.

The panel’s report, spanning over 800 pages, mainly blamed Georgiades for the collapse of the bank and its forced sale to Hellenic last year. It also recommended further investigation into the actions of former CEO Nicolas Hadjiyiannis and other executives.

The report, released on Wednesday, also assigned blame on the president and the cabinet, parliament, parties, the central bank, and the European single supervisory mechanism.

Auditor-general Odysseas Michaelides, who had heavily criticised the way the minister handled the bank, said the panel had met the expectations of the public.

Government spokesman Prodromos Prodromou said at first glance the probe appeared to be flawed. Speaking on state radio on Thursday morning, the spokesman argued that it had failed to take into account the regulatory framework in force at the time.

But the auditor-general said what happened with the co-op eventually was not part of the restructuring plan submitted and approved by the EU.

Instead of an orderly denationalisation there was a forced sale in conditions similar to having a “gun to the head,” Michaelides said.

The investigating committee proved to be “worthy of citizens’ expectations,” delivering a fully substantiated report.

Michaelides, who had also testified before the panel, said he had proven that Georgiades acted “with stubbornness, with obstinance, and instead of having prudence and rationality there was incompetence.”

Diko leader Nicolas Papadopoulos said the findings were clear and there could not be any blame for anything that happened before 2013 because the current government had recapitalised the co-op bank twice arguing that it was viable.

Papadopoulos called on Georgiades to resign and accused President Nicos Anastasiades of knowing where the bank was headed, but choosing to hide it until after the elections.

Akel chief Andros Kyprianou said the minister should either resign or be sacked by the president.

“The report is clear. The minister has huge responsibility … as does Mr. Anastasiades who knew and should have sacked Harris Georgiades after seeing that four years since the administration took over the co-op bank, he did not manage to tackle the many problems.”

Kyprianou said Akel demanded from Anastasiades to assume his huge responsibility; “He should publicly admit that he has huge political responsibility … and at the same time Mr Georgiades should resign and if he does not resign, he should be sacked.”

Both Diko and Edek demanded the names of politically exposed persons who either had their loans written off or had not been servicing them.

According to the report, €1.1bn worth of loans had been written off in 2016 and 2017 without a clear explanation or justification.

Diko’s Papadopoulos demanded that the attorney-general launch an investigation into the matter while parliament should obtain the list with the names of politicians who benefitted.