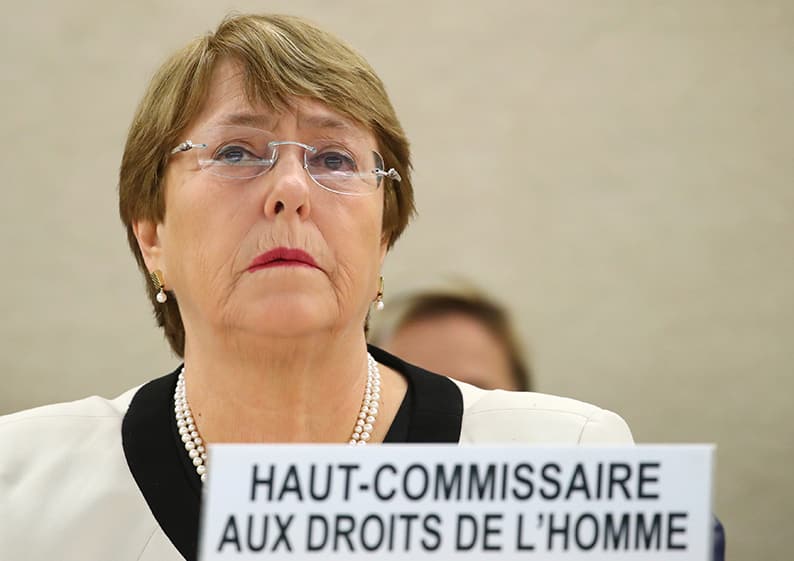 UN High Commissioner for Human Rights Michelle Bachelet attends a session of the Human Rights Council at the United Nations in Geneva, Switzerland

Three dozen countries, including all 28 EU members, called on Saudi Arabia on Thursday to release 10 activists and cooperate with a UN-led investigation into the murder of journalist Jamal Khashoggi at its Istanbul consulate.

It was the first rebuke of the kingdom at the UN Human Rights Council since it was set up in 2006 and came amid growing international concern about Saudi violations of basic freedoms such as freedom of expression.

“It is a success for Europe to be united on this,” an envoy of an EU country told Reuters.

The joint statement, also backed by Canada and Australia but not the United States, was read out by Harald Aspelund, Iceland’s ambassador to the UN in Geneva. There was no immediate Saudi reaction.

“We are particularly concerned about the use of the counter-terrorism law and other national security provisions against individuals peacefully exercising their rights and freedoms,” Aspelund said, reading the text.

Activists can and should play “a vital role in the process of reform which the Kingdom is pursuing”, it said.

Activists allege that jailed women activists, including those who campaigned for the right to drive, have been subjected to electric shocks, flogging, sexual assault and other forms of torture.

The EU and other sponsoring countries said they “condemn in the strongest possible terms” the killing of Khashoggi, noting that Saudi Arabia has confirmed it took place at its Istanbul consulate on Oct. 2.

“The circumstances of Mr. Khashoggi’s death reaffirm the need to protect journalists and to uphold the right to freedom of expression around the world,” the text said.

“Investigations into the killing must be independent, impartial and transparent,” it added, specifically calling for cooperation with a probe led by Agnes Callamard, the UN special rapporteur on extrajudicial executions.

Neither Turkey, non-EU Switzerland, nor Israel were among the signers.

“These women human rights defenders are detained only because they fought for their right to exist equally as men, in their country,” Salma El Hosseiny of the International Service for Human Rights said in a statement on Thursday.

The Saudi deputy public prosecutor told Saudi-owned newspaper Alsharq Alawsat last week that his office had looked into media reports that the women were tortured and found no evidence, calling the reports “false”.